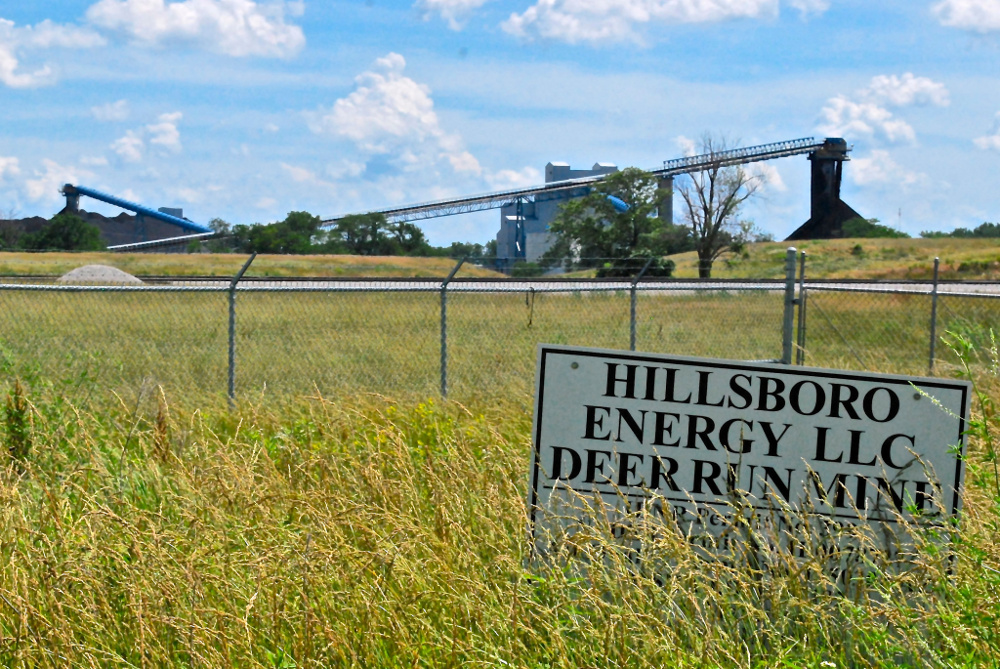 For almost a year, high levels of carbon monoxide have been wafting through the Deer Run Mine in central Illinois, likely signaling spontaneous combustion below ground.

So far, mine operators and federal investigators have been apparently unable to find the source. This month Foresight Energy, the company that runs the mine through its subsidiary Hillsboro Energy LLC, announced that the mine is closed indefinitely and made 100 layoffs company-wide.

Despite the closure, Foresight is still moving forward with plans to expand the mine for potential future operations.

The Mine Safety and Health Administration ordered mining to stop based on the carbon monoxide. However, MSHA spokesperson Amy Louviere said, “the spontaneous combustion event does not pose any health threat to the surrounding community.”

But some locals and experts worry that a smoldering fire could pose future risks, especially since Foresight has apparently halted efforts to extinguish the combustion. And area residents say the fire just bolsters their opposition to the longwall mining being done at Deer Run, a process that causes extensive subsidence of the land above the mine.

A mining engineer with expertise in mine fires, who asked his name not be used for professional reasons, said area residents could be at risk, and he thinks the company and federal regulators are shirking their responsibility.

He said the fire could continue to burn underground, eventually collapsing the earth above already destabilized by longwall mining. That could allow deadly carbon monoxide to waft up into the atmosphere through fissures opened by the mining, he said. He said he has investigated cases around the country where carbon monoxide in such situations travels along the beds of pipes or ditches and can enter homes.

Bruce Stanley is a Pittsburgh trial attorney who represented miners’ widows and filed successful lawsuits regarding a fatal 2006 fire in the Aracoma mine run by Massey Energy in West Virginia. Stanley has been monitoring the Deer Run situation, though he has no involvement or stake in it. He describes longwall mining as like a giant sandwich meat slicer moving through the coal seam, the roof collapsing behind it.

“You ask yourself, if it’s a fire why can’t they get it out?” he said. “That tells me they don’t know where it is, they can’t locate it. My guess is it’s somewhere beyond where that roof has collapsed… they can’t get to it…They’re literally trying to find the needle in a haystack in the dark.”

Foresight Energy did not return calls and emails for this story.

While mining is halted at Deer Run’s current operations, Foresight Energy is proposing a 7,731-acre expansion [large PDF] of the mine’s “shadow area,” which would allow it to expand into areas not affected by the fire.

Residents and environmental groups oppose the expansion because of the potential land subsidence and effects on water.

“When you tell people someone can come into your property and sink it, it’s hard to believe,” said a local corn and soybean farmer, who asked that his name not be used. Under Deer Run’s current permit, his farm sits above the next “panel” slated for mining if operations resume.

Locals say they have not been given any information about the status of the fire, but it just increases their doubts about the ability of Foresight to act responsibly and of regulators to keep tabs on the company.

“It’s an indictment of the company and the management of this mine,” said Joyce Blumenshine of the Illinois chapter of the Sierra Club. “There are local citizens who are very concerned. Who knows how much risk there is to the community if this fire continues. And there has not been disclosure or real answers for the community.”

Opponents of the mine say that especially given the ongoing carbon monoxide problems and the inability to find the source, state regulators should not let Foresight move forward with the expansion.

“The current mine atmosphere problems will have no influence on the review process for the proposed expansion of mining,” said Chris Young, spokesman for the Illinois Department of Natural Resources (IDNR), which will hold an informal hearing on the mine expansion proposal on February 11. “If the proposed mining is determined to meet the regulatory requirements and is approved, it will simply afford the company additional mining area in the event the mine can someday resume production.”

Critics have long described the IDNR as being too friendly to coal companies, including Foresight. Amid such criticism, in 2014 reforms to the agency’s coal mine permitting process were announced.

Bill Schroeder, a retired operating engineer who has lived for 18 years near the mine’s proposed expansion, said he is not overly concerned about the carbon monoxide but he is worried about the impact on the land and surrounding area if the expansion happens.

“They want to do it the easiest way to make money, but this is an area where it’s not the right thing to do longwall mining,” he said. “We cannot at this time exist without coal-fired electricity, it’s just not possible or practical. But there should be much more consideration taken as to how we get the coal.”

Young said state regulations require mining companies to repair or compensate landowners for any damage caused by subsidence or drainage problems. “To date, the company is meeting its obligations in this regard,” he said.

A spokesman for the federal Office of Surface Mining Reclamation and Enforcement said that the federal agency has no jurisdiction over subsidence from current mining operations, or any carbon monoxide leakage that could result from fires. He said the IDNR and Illinois Environmental Protection Agency are responsible for regulating these issues.

A productive mine in crisis

Deer Run, one of the most productive coal mines in the country at about 5.5 million tons a year, reportedly employed about 160 people.  The mine was evacuated and production was halted on March 26 at 2 a.m.

In July, the federal Mine Safety and Health Administration (MSHA) allowed employees back into the mine, but they were later barred after more high carbon monoxide readings. Foresight was pumping nitrogen into the mine in an attempt to cut off oxygen fueling the combustion, but those efforts have reportedly stopped.

In July 2014, Deer Run had also been shut down for almost a month because of a fire, meaning a production decrease of half a million tons and losses of $2.6 million, according to SNL Energy.

Louviere said that if Foresight proposes to reopen Deer Run, the federal agency will determine if it is safe.

Stanley said he doesn’t expect federal regulators to allow staff back in the mine any time soon, “even to retrieve their equipment.”

“It’s tying up a bunch of capital on a highly productive mine,” said Stanley. “At the same time they are servicing debt on that equipment, the income stream on which they were servicing it has dried up, and they’re in a position where they can’t put miners back underground.

“This mine was producing a fair amount of tonnage for them – longwall generates a lot of coal and a lot of budget planning and numbers are based on that anticipated production,” he continued. “It’s not like losing a smaller room-and-pillar mine.”

Murray Energy Corp., billed as the country’s largest coal company, bought a controlling interest in Foresight Energy in a contentious deal last year. Foresight has been ordered to buy back $600 million in bonds, as bondholders were promised the right to cash out in the case of such a sale.

Meanwhile, Murray has come under fire for safety practices and allegedly trying to silence whistleblowers, as the U.S. Department of Labor charged last fall.

To Blumenshine, the financial pressures on the company further undermine her confidence that Foresight and regulators will deal with the fire and subsidence concerns adequately.

“The pressures to keep production going, to get this mine operating raises concerns for the management of these mines and the risks to the public that really aren’t being explained or talked about,” she said.