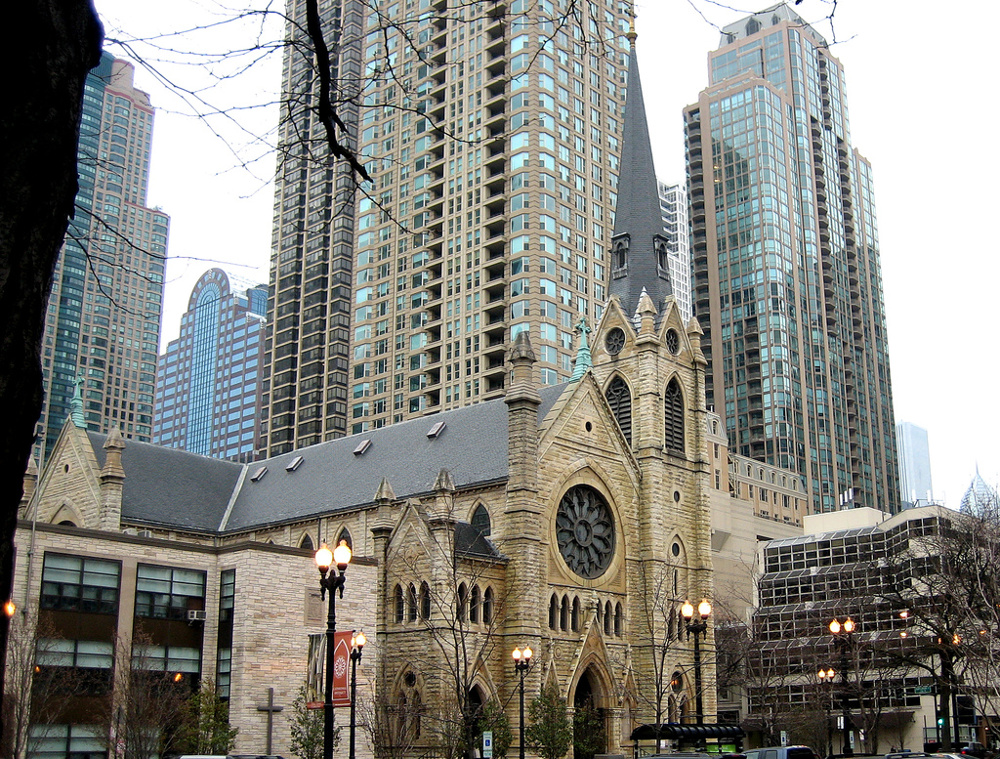 The Archdiocese of Chicago’s historic churches and Catholic schools are part of the social, religious and economic fabric of the city. But the soaring cathedrals and stolid aging buildings can also be energy hogs.

Last summer, the city’s Archbishop Blase J. Cupich announced an ambitious goal of measuring the energy use in the archdiocese’s 2,700 buildings in Chicago and surrounding Cook and Lake counties.

As a result, the archdiocese has been among the star performers in Chicago’s energy benchmarking program, an initiative launched in 2013 that marked notable progress in 2015, as noted in a recent annual report.

Buildings offer immense potential for energy savings, and for reductions of greenhouse gas emissions from power plants. An increasing number of cities have launched benchmarking programs and requirements, allowing comparisons and best practices to emerge.

The 2015 Chicago benchmarking report revealed the potential to save up to $184 million annually in energy costs in the 1,840 buildings reporting from all 77 of the city’s neighborhoods, representing about a fifth of the city’s total building energy use.

Katie Kaluzny, associate director of the U.S. Green Building Council-Illinois chapter, said that “2014 was like a pilot year, with the largest commercial office buildings, many that had been focused on energy use to begin with.

“The year 2015 was really bringing in new buildings where energy tracking hadn’t been a big part of the conversation,” she continued. “If this is the first time you’re looking at your energy use, what are you going to do with that score or that number? How will that prod you to do things differently, looking at operations of your building, improvements that might not have been on your radar to begin with.”

The report notes that energy accounts for almost a third of a typical building’s costs, and that buildings are responsible for 71 percent of the greenhouse gases emitted to power the city.

Benchmarking in and of itself does not ensure energy will be saved. But finding out exactly how much energy a building uses, and when, where and why is an essential step to making energy efficiency and conservation improvements.

And it is not an easy task, especially for large buildings, companies and organizations, with multiple stakeholders, tenants, managers and utilities involved.

How Chicago stacks up

The report says there are now 15 cities, two states and one county with benchmarking requirements. Ohio, Michigan and Minnesota have benchmarking programs for public buildings, and Minneapolis has a program for commercial buildings.

Chicago’s is the first in the nation to include data verification. Starting in 2015, Chicago data was made available to the public.

“It’s become part of the conversation that wasn’t readily available before,” said Kaluzny. “Like when you buy a car and look at the miles per gallon, that has just not been available for buildings until now. It will be interesting to see how the real estate market responds.”

Chicago buildings must use the EPA’s Energy Star Portfolio Manager, a free online tool, to comply with the ordinance.

Chicago buildings reporting in 2015 had an average Energy Star score of 58, which is above the national median of 50. Offices, schools and retail establishments scored above the national average for their building type, while multi-family buildings and health care institutions scored lower than average.

There was high compliance with the ordinance, with 92 percent compliance as measured by square footage and 99 percent of all municipal buildings reporting.

The city hosted 20 free benchmarking workshops and did outreach to industry, chambers of commerce and labor unions, noting that more than 2,000 jobs could be created from improvements made based on the benchmarking results.

Utilities ComEd and People’s Natural Gas agreed to provide energy data for whole buildings free of charge, an important factor since many buildings have multiple meters for individual tenants. The utilities also have programs that allow energy use data to be automatically uploaded to Energy Star Portfolio Manager.

A priority for public housing

The Chicago Housing Authority has benchmarked 51 of its properties, including ones that were not required to benchmark until the end of 2016. The housing authority now offers incentives to the private managers contracted to run the buildings if they reduce energy use.

“We could never do that before because we didn’t have the data,” said Ellen Sargent, Director of Sustainable Initiatives and Projects for the housing authority’s properties.

“Once you know your information, it really helps you prioritize how you’re spending capital moneys,” added Sargent. “Not only with a new roof or new windows that look good and make the inhabitants happy, you’re also going to improve the thermal shell which leads to savings on utility bills.”

Collecting data and entering it into Portfolio Manager was no easy task since the public housing buildings vary significantly and are operated by individual managers and contractors. The housing authority held a “data jam” to get the task done, complete with music and snacks for building managers and staff from USGBC, MEEA and the technical society ASHRAE.

“We’ll be looking to compare ourselves to other multifamily buildings that are benchmarking across the country and make better decisions for capital improvement projects, operational changes, and also a component of behavior modification for staff as well as residents,” Sargent said.

“When you’re in a building with an old inefficient heating system, often it’s overheated to even 80 degrees. Even in cold months, you’re used to being too warm, which is inefficient and not healthy. But you get used to it. So when something changes and you have a new energy efficiency system, there will be behavior modifications for both staff and residents.”

Efficiency in the archdiocese

Eighteen of the archdiocese’s buildings are covered by the Chicago ordinance. The archdiocese has also benchmarked 700 other buildings in the city. With annual energy costs of about $30 million, the EPA tool estimates the archdiocese could save $3 million to $9 million per year on energy.

“As you might expect, an organization as large as ours cobbled together over 175 years wasn’t quite streamlined,” said Kevin Marzalik, director of business transactions and affiliated services and interim director of real estate management and development for the archdiocese.

He said they found the Portfolio Manager program easy to use and also gave the EPA advice on how to improve it, including addressing situations where very different types of buildings are in the same categories.

“If we’re lumped into a worship category, the data is skewed when we have storage buildings, rectories, a convent, a school,” Marzalik noted. “At Holy Name Cathedral, the height is greater, the volumetrics are greater, the use is probably greater than at a regular community parish.”

He said that while the national benchmarking information is helpful, the archdiocese itself is so large that even benchmarking within their own portfolio provides very useful information.

“We have buildings and campuses that are similar, so why is the energy use at one different than others?” he asked. “We look at the number of floors, the volume, whether there is a gym. We’re also looking to add heating and cooling information from our insurance assessors. We’re grabbing from every source we can to see explanations of why there’s a variance, to point us to low-hanging fruit, and go after that first to get savings for parishes.”

Along with the financial incentives, the Archdiocese like the city and other players see benchmarking as a way to further larger environmental and societal goals.

“We see it as part of the mission, protecting our common homes,” Marzalik said.