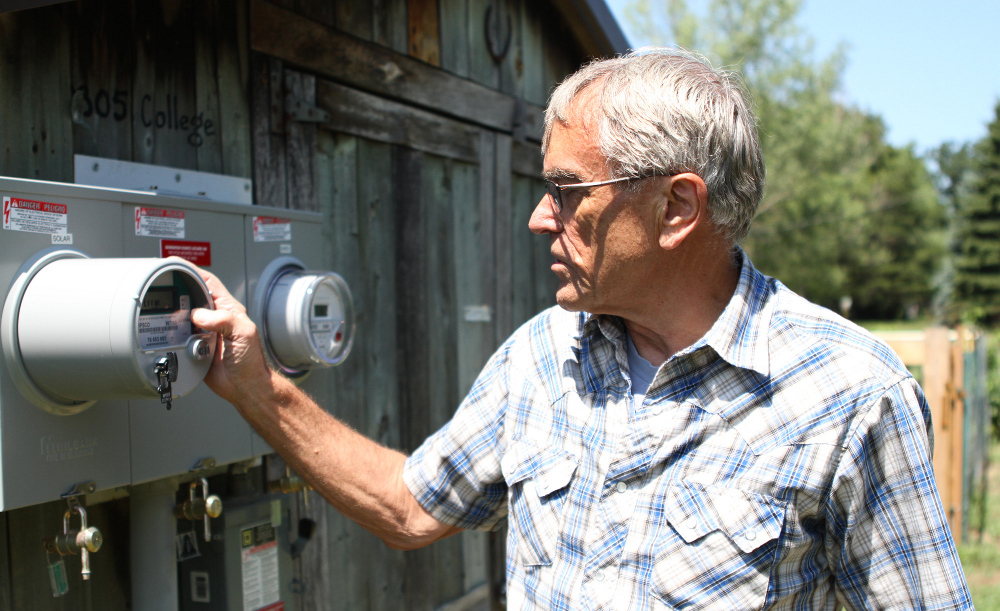 Marvin Bartel checks the electric output of the solar collectors on the lot that he owns in Goshen, Indiana, in 2012.

An Indiana utility is requesting a fixed rate charge increase of more than 80 percent, even as nationwide utility commissions have denied or curbed many such requests and utilities in other states have backed off the strategy.

The northern Indiana utility NIPSCO argues, as other utilities around the country have, that it needs the rate structure revision to make sure that all customers pay their fair share for upkeep of the grid.

Increased fixed charges are widely seen as an attack on distributed solar, since a set charge regardless of how much energy one uses discourages generating one’s own electricity. The increases also discourage energy conservation and efficiency.

In a case filed October 1 (docket number 4468), NIPSCO asked for fixed monthly charges to be increased from $11 to $20 per month for residential customers. Previously the utility Indianapolis Power & Light Company also asked for a fixed charge increase, from $11 to $17 monthly. The Indiana Utility Regulatory Commission is currently considering both cases.

“This conversation is getting underway in Indiana and the NIPSCO case is on top of the list because of the language they used and their stated intent that, ‘This is just the beginning folks, we’ll be back for more every few years,’” said Kerwin Olson, executive director of the Citizen Actions Coalition. “It’s something we’d like to nip in the bud.”

Indiana currently has only a very small amount of distributed solar installed.

“The solar industry is in its infancy in Indiana, but there is much potential,” said Amy Heart, senior manager of public policy for Sunrun Inc. “Large increases in fixed costs at this time, like in NIPSCO’s proposal, will not only hamper residents’ ability to manage energy bills but also eliminate the viability of solar to help lower energy bills. This eliminates options for customers, but will also be damaging to the growing solar industry in Indiana.”

NIPSCO spokesman Nathan Meyer said that the utility supports renewable energy and customers who want distributed solar, through feed-in tariff and net metering programs that pay or credit customers for energy they generate.

“Our proposal is not intended to discourage growth of this form of energy,” Meyer said. “We believe that any future programs should balance the cost impact on those customers who do not wish to participate.”

Meyer said the increased fixed charge “is intended to capture those costs that exist for all residential customers regardless of whether a customer uses 1 kWh or 10,000 kWh of electricity each month.

“That includes the cost of providing 24/7 customer service, billing and meter systems and the basic infrastructure required to ensure power is available whenever a customer flips the switch,” he continued. “Customers are still incentivized to save energy, as a majority of a customer’s bill would still be tied to the amount of electricity used.”

Karl Rabago, a former Texas public utility commissioner and expert witness for the ELPC and CAC, testified that NIPSCO did not adequately demonstrate that it needs the fixed charge increase to recover its costs. He said the company “produced no studies, surveys, analysis or other data to demonstrate the actual existence of any actual problems.”

Rabago added that relying on fixed charges for full cost recovery makes sense only if a utility is unable to adequately forecast energy use and unable to come up with an adequate volumetric billing structure (based on amount of energy used), and if “one believes several other impossible things” related to the utility’s options for recovering costs.

“Presumably, the utility is doing this not in response to any real problem but instead in an effort to guarantee more revenue that is unrelated to usage, and thus shift risks from its shareholders to its customers,” said Klein.

John Howat, Senior Policy Analyst at the National Consumer Law Center (NCLC), testified that higher fixed charges are harmful to low-income people, households headed by African-Americans and households headed by senior citizens, since on average these groups use less electricity, according to an analysis of utilities around the country.

Howat testified “that increased monthly fixed or customer charges therefore unfairly and unjustly cause disproportionate harm and exacerbate pre-existing electric utility affordability and home energy security problems faced by many of these households.”

However, NIPSCO filed testimony showing that their low-income customers use more energy than average, 726 kWh a month compared to 679 kWh for all customers.

He added that NIPSCO is proposing assistance to low-income customers in the form of a lump sum payment of $50 in June, when electric bills are typically high. In his testimony, Howat proposed more aggressive low-income assistance and blasted NIPSCO for charging late fees to and disconnecting low-income customers. He said NIPSCO should be required to report data on these issues to the commission monthly.

Howat cited data to show that: “a minimum wage worker must devote about nine times the percentage of total income for home electric service as a higher-income household, raising an equity concern in light of the fact that electricity service is a basic necessity of life.”

ELPC senior attorney Brad Klein said that “NIPSCO is coming in a bit late to the game as the national conversation seems to be shifting away from fixed charges.”

Klein noted that Peter Kind, author of a report for the Edison Electric Institute “that seemed to instigate this wave of utility fixed charge proposals, has since backtracked.”

Even in Wisconsin, where regulators have approved multiple large fixed charge increases, utilities have scaled back their requests for drastic increases. Klein noted that other Midwestern regulatory commissions have denied significant increases, notably in Michigan for DTE, in Minnesota for Xcel, and in Missouri for Ameren.

“We believe that commissions have largely rejected mandatory fees because they’re unfair, extremely unpopular, disproportionately harm the utility’s most vulnerable customers, and send a strong signal that the state is not open to competition, innovation and new business growth,” said Klein. “While this may be good for monopolist utilities in the short run, it sends all of the wrong signals for the state to be competitive in a 21st century economy.”