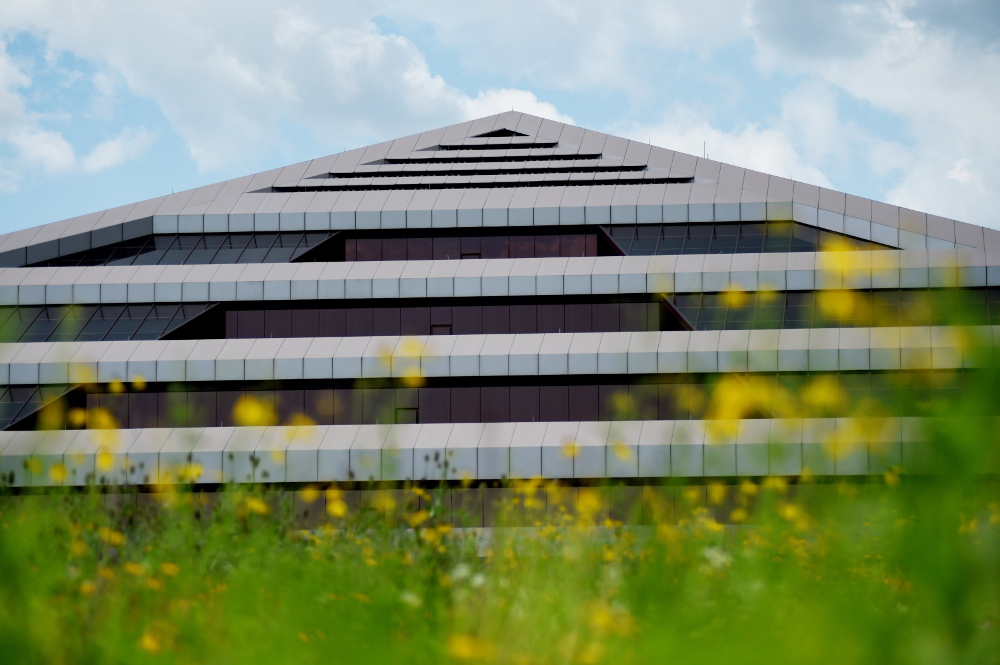 Availability of renewable energy was a key factor guiding Switch to convert this former Steelcase Inc. building near Grand Rapids into a data center.

While corporations across the country increase their commitments to run on renewable energy, companies in Michigan still face significant obstacles.

Many large businesses in the state are limited in their ability to purchase renewable energy due to a law that restricts shopping for electricity to one-tenth of a utility’s load. When it comes to self-generation, large users are also restricted by the state’s prohibitive solar net metering law on large installations, advocates say.

But businesses and utilities here are increasingly active in working together around those restrictions, multiple corporate leaders said on Feb. 2 in Detroit at the third annual Michigan Energy Conference, which focused on corporate pathways to renewable energy.

“I think businesses have done a pretty good job figuring out ways to get it done,” said Dan Scripps, senior advisor with the Michigan Energy Innovation Business Council, which hosted the event.

But given Michigan’s limited Retail Open Access law, which is already filled with those who can purchase energy from alternative suppliers and includes thousands on a waiting list to participate, there currently is no clear path for major energy users to follow.

“The biggest challenge is that a lot of these (arrangements for clean energy) seem to be one-offs,” Scripps said, referring to recent announcements by Ikea to increase solar generation and Switch Communications Group LLC to build a data center run on 100 percent renewables.

“A lot of businesses may wonder: ‘That’s great they’re building a $5 billion data center in Michigan and had the full attention of the legislature and everyone else, but what does that mean for me?’” Scripps added.

‘Energy is our lifeblood’

Switch’s announcement on Jan. 21 that it would run its new data center in West Michigan entirely on renewables is part of ongoing negotiations over a long-term power purchase agreement with its utility, Consumers Energy. But the company was bullish on acquiring that generation — one official said Switch’s decision to come to Michigan hinged solely on reliable and renewable energy.

Kramer declined to say what the facility’s energy needs will be or where the renewable energy will be generated, citing ongoing negotiations with Consumers.

“From our perspective, energy is our lifeblood,” Kramer said. “That meeting with Consumers is ultimately one of the most important meetings we had in determining whether it was a suitable location for us.”

Moreover, Kramer said the company’s energy needs came before its desire for a competitive tax structure. At the end of the state legislature’s 2015 session, lawmakers fought over whether to give tax incentives to Switch and other co-located data centers. The Michigan Chamber of Commerce was outspoken against the incentives, which lawmakers and Gov. Rick Snyder ultimately agreed to.

While Switch’s plan forward with Consumers could be considered a “one-off” agreement, Kramer said the company is also focused on establishing a “green rider tariff” for other large users. The goal is to allow those customers easier access to the renewables market, he said.

Given the political likelihood that Michigan will keep its 10 percent choice cap moving forward — which some critics say will actually choke off the market even more than it does now — Scripps said revising the state’s existing green tariff program might be the best path forward.

He also sees utilities here focusing in on their large customers’ needs.

“They want to operate more like businesses and less like monopolies,” Scripps said of regulated utilities. “To them that means meeting the demands and expectations of customers, even if they are captive customers. Utilities see there is an opportunity here and can do deals with benefits on both sides of the table.”

All of this is predicated on the steady transition of corporations worldwide turning to renewable energy to meet sustainability goals.

Detroit-based General Motors was one of the first signatories to the Corporate Renewable Energy Buyers’ Principles, a consortium of dozens of corporations from 3M to Yahoo! committed to renewable energy deployment. GM has also developed 11 solar projects totaling over 2 megawatts at its facilities across the state.

Elsewhere in the Midwest, Facebook, Amazon and Ikea recently announced major renewable energy projects in Iowa, Ohio and Illinois, respectively. Corporate officials gathered in November in Ohio to proclaim a transition to renewables and energy efficiency despite state leaders’ efforts to freeze clean-energy standards there and block the Clean Power Plan.

“Companies are saying: This is part of who we are as a business. It’s important for recruiting and it’s important for our image,” Steve Vavrik, chief commercial officer for Apex Clean Energy, said during the conference in Detroit. But it’s also a financial decision, he added.

“For those who think renewables have a lot of risk, facts are starting to get in the way of that,” he said. “The benefits are so overwhelming that it’s worth the change. The economic balance is so strong right now and getting stronger.”

How Michigan stacks up

In Michigan, large industrial users are no small piece of the energy consumption pie. Michigan ranks 11th nationwide for the annual electric consumption by large corporate customers, according to the Advanced Energy Economy report. Companies here with 500 or more employees account for 30 percent of annual energy usage, while small and medium-sized businesses make up another 26 percent, the report adds.

The report also suggests the market for more renewables could grow if the state’s cap on choice was expanded or the state’s net metering restrictions were lifted.

Vavrik said Michigan is “an interesting contrast to your neighbor to the south,” referring to Ohio’s “different attitude” towards renewables in light of last year’s freeze on clean energy standards and new restrictive setback requirements for wind turbines.

“Compared to Ohio, it’s better to do business in Michigan,” Vavrik said. “Michigan is doing the right things, but there is more to do.”

Despite a growing push to increase renewable accessibility for large energy users, contention still appears to surround the path forward.

Sweeping energy proposals being debated in the state legislature seek changes to the state’s Retail Open Access law and net metering policies, though each topic has generated backlash from independent power producers and residential users, respectively.

It also appears unlikely that the state will have any legally binding renewable energy standards going forward as Michigan’s 10 percent renewable requirement leveled off at the end of 2015. Even business groups are divided on whether lower renewable costs make the case for or against an expanded renewable standard.

Scripps said “this surprises me a little bit” that traditional business advocates in Michigan like chambers of commerce vary on expanding the RPS, a policy traditionally opposed by business interests as an “artificial mandate.”

“But what I think has been more noteworthy is that in previous discussions around this, I don’t think there was a lot of business support for these ideas. It came largely from the environmental community,” Scripps said. “The fact that you’ve got regional chambers of commerce on the record and groups like the EIBC formed speaks to some degree on how far we’ve come.”