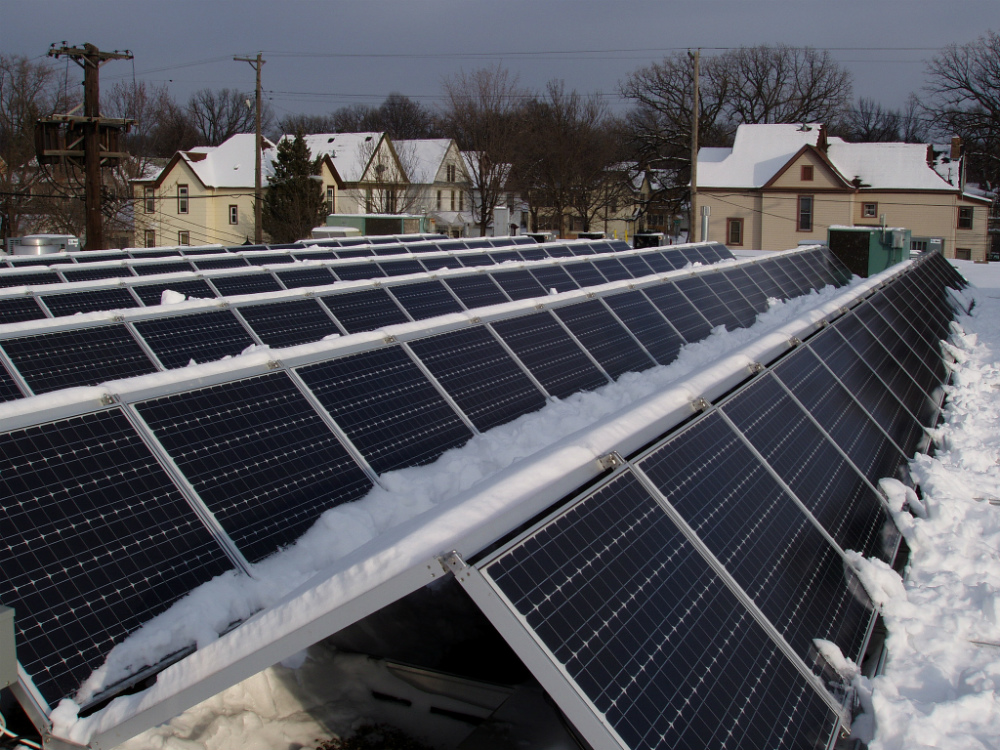 A recently released jobs report shows Minnesota’s solar workforce has nearly doubled in the past two years, with more growth to come.

The report, released last week by the Solar Foundation, found Minnesota’s solar employment has grown 131 percent since 2013, to 1,995 employees, largely due to favorable state policies.

Installed capacity has grown significantly, too, with 6.5 megawatts (MW) added through September of last year for a total of 30 MW, the report said.

The report noted several policies promoting clean energy in Minnesota, including the state’s renewable energy standard and requirement that investor-owned utilities meet 1.5 percent of their retail sales demand with solar energy by 2020.

The capacity growth is coming from utility scale efforts such as the 100 MW Aurora Solar Project being built by Geronimo Energy and a dramatic increase in community solar gardens that are being proposed in Xcel Energy’s territory. More than 1,400 MW have been proposed since Xcel began accepting applications in 2014.

“Mostly we’re in the process of preparing for a ton of megawatts being planned for solar gardens,” Shaffer said. “We estimate we’re going to go from 35 MW to 1,000 MW over the next three years.”

Nearly half the current jobs in Minnesota fall into the sales and distribution category.

That does not surprise Shaffer, who said many solar developers are hiring sales people to “knock on doors” to recruit subscribers and work on planning and zoning issues with counties and cities.

“The number of people doing those jobs speaks to where we are in the process,” he said. “A lot of jobs now are for people talking to cities and counties about projects and talking to potential subscribers.”

The next wave of hires will likely be installers, electricians and others involved in the construction process.

Another reason for the large number in sales and distribution may have to do with how respondents identified themselves.

The report stated that “it is interesting to note that Minnesota employers report two out of three solar workers in the state work directly on installing and repairing solar systems, potentially signifying that Minnesota firms self-identifying as primarily sales & distribution firms are much more involved in the installation process than their counterparts nationwide.”

One of the state’s faster growing solar companies is Novel Energy Solutions in St. Charles. “We can’t keep up with the demand, and it’s a good problem to have,” said Cliff Kaehler, chief executive officer and one of the company’s founders.

Novel’s rooftop solar program has been so successful, marketing is entirely based on “word of mouth” advertising, he said. The community solar effort, however, has led to hiring more employees for sales and operations since it is a more intensive process, Kaehler said.

In just the past year, Novel doubled employment to more than 20 people and it expects to at least double that number again this year.

“I don’t know how many we’ll hire but with the generation going online we’re in for a big increase,” he said.

That’s a bit more than the report’s predictions. Employment will grow more than 20 percent next year, the report said, bringing another 410 jobs. The state’s overall workforce is expected to grow less than one percent over the same time period.

The report placed Minnesota at 22nd nationwide in the number of solar jobs and 25th per capita for solar employment.

Though the industry is smaller in the West North Central region – Iowa, Minnesota, Kansas, Missouri, Nebraska, the Dakotas – workers enjoy above-average wages. Installers earn $25 an hour, compared to $21 an hour nationally; solar system designers take in $31.30 an hour, as opposed to the national rate of $26.

The likely reason for the high wages in Minnesota, at least, is that solar industry has the second highest rate of unionization in the country, after Delaware.

The Solar Foundation’s study reveals a few other intriguing characteristics about Minnesota’s industry. While the number of minorities is small, the percentage of Hispanic workers is six times their participation in Minnesota’s workforce and twice the national average.

Moreover,  Minnesota’s solar businesses have taken advantage of a U.S. Department of Energy program to help move military veterans into the field. Veterans are 9.8 percent of the state solar workforce compared to 8.1 percent for the nation.

Employers say finding qualified employees isn’t much of a challenge, with only 8.3 percent calling it “very difficult” to find candidates.

The report suggests that this statistic – the national one is three times that number – is likely due to the fact people hired by the industry last year filled jobs that did not require previous solar experience.

Nationally, the industry supports 209,000 jobs and 28 states saw positive job growth last year. The industry accounted for 1.2 percent of all jobs created in 2015.