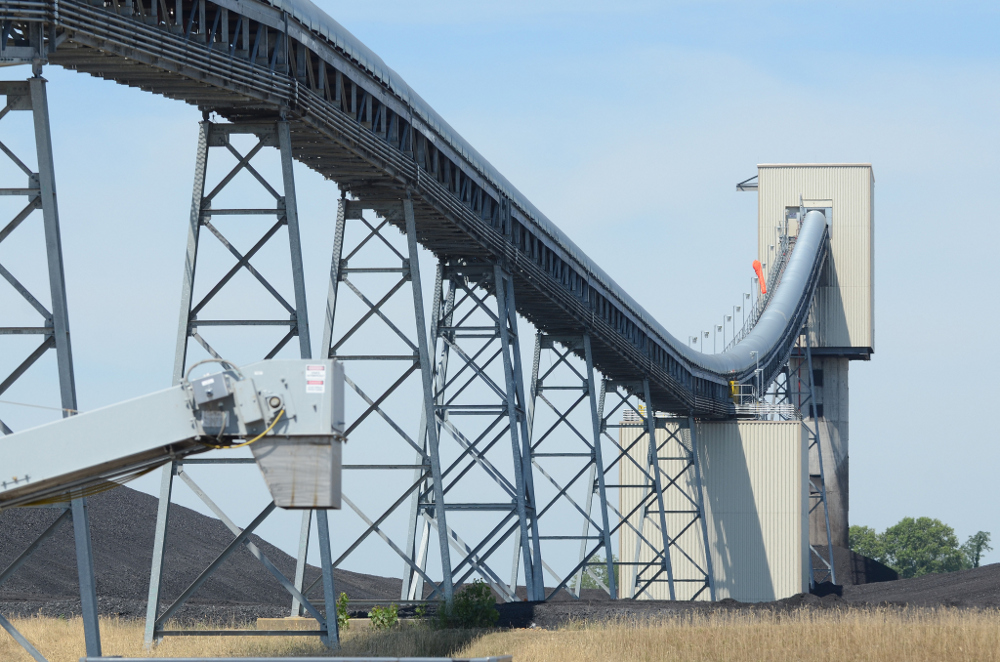 A coal conveyor at the Edwardsport IGCC plant in Indiana.

They had agreed on a settlement along with the state’s Office of the Utility Consumer Counsel, industrial customers and Duke that would cap rates and release funds for distributed solar and low-income customers.

Not all Edwardsport opponents were happy with the terms of that settlement, however.

Attorney and energy expert Michael Mullett decided to file his own petition in the Edwardsport proceedings, opposing the settlement as not protective enough of ratepayers. Mullett was a co-founder of the Citizens Action Coalition, one of the groups leading challenges to the Edwardsport plant, and he’s long worked with the coalition and environmental groups on various issues.

The Indiana Utility Regulatory Commission still needs to approve the settlement, which was announced in January. Mullett’s challenge stretches out the proceedings, with his briefs due on February 25 and rebuttals due in March.

Mullett is essentially arguing that the proposed settlement doesn’t go far enough in protecting ratepayers like himself and his wife, Patricia March, who were both granted official intervenor status by the commission. He objects to the way the plant as a “regulatory asset” is defined and how that will increase rates, by tacking on costs from the past to future bills.

Mullett objects to the proposed settlement enshrining the plant’s start-of-service date as June 2013. Opponents argue that the plant wasn’t really providing energy at significant levels until a year later, and they say ratepayers should not be responsible for the “start up” costs of running the plant during that year.

The proposed settlement reduces the amount that ratepayers will be billed for that year by more than $80 million. But it allows the June 2013 date to stay on the books and allows the company to claim depreciation and other costs during that time, which Mullett says equates to about $145 million.

The settlement proposed last month bars the other “joint intervenors” – including the Citizens Action Coalition and Sierra Club – from objecting to Duke’s rate recovery plans through the end of 2017, unless the plant performs worse than expected.

Mullett thinks that the bar is essentially too high to allow the groups to challenge Duke’s recovery plans within the next two years. The trigger to allow challenges is based on the plant’s already sub-par performance, Mullett argues, so the plant could continue to perform well below original projections without its rate recovery plans being challenged.

“We believe we have a strong settlement representing all of the state’s leading consumer groups,” she said. “This is a plant that has been built in a glass house, with extensive regulatory review and hearings to carefully examine all costs. Our shareholders have absorbed approximately $900 million of the project’s costs, and construction costs for customers have been capped.

“Now a settlement has been proposed to also limit what customers will pay for operating costs through 2017. There have been extensive efforts to protect customers, and we have a settlement representing all the state’s leading consumer groups, including those who usually oppose us.”

Citizens Action Coalition executive director Kerwin Olson said he is frustrated at the delay caused by Mullett’s petition, and reiterated that the groups that agreed to the proposed settlement think it is the best way to protect ratepayers in the near-term while still allowing challenges to the plant in the future.

“We had hoped for and anticipated that we would have an uncontested settlement and we would likely have seen an order by early summer – the hearings would be over with and we’d be awaiting a commission order,” at this point, Olson said. “Now that we have a contested settlement, we don’t even have a hearing until mid or late April. It will delay the settlement, there’s no doubt about it.”

The settlement includes a provision that will essentially make ratepayer relief retroactive if the process is slowed down by “regulatory lag,” as Olson noted. “Fortunately we were able to secure that additional benefit in case the settlement is drawn out.”

Anthony Swinger, spokesman for the Indiana Office of Utility Consumer Counsel, said: “I can’t speculate on what will happen, but we respect the right Mr. Mullett and Ms. March have to intervene in this case…Once we receive their filing, we will review it and determine next steps.”

Olson said while the groups would have liked greater protections for ratepayers, they were weighing the potential cost of litigation and its likely outcome against the need to get protections in place soon. Industrial customers of Duke and the Office of the Utility Consumer Counsel had reached a previous settlement last fall, which was less desirable for ratepayers.

“Litigating” would have meant appealing that settlement before the utility commission, then appealing to state courts if the commission did not rule favorably.

The Citizens Action Coalition and other critics had appealed a 2012 settlement regarding the plant, to no avail. Olson noted that challenging a settlement, to which parties have agreed, is more difficult than challenging an order by the utility commission.

“This is a two year deal that puts some protections in place, and after that all bets are off,” said Olson of the proposed settlement. “This is an illegitimate power plant that shouldn’t have been approved in the first place. But we’re at a different point now than we were [when the plant was in earlier stages]. We stand by this settlement, we think the settlement is a very good deal for ratepayers.”

Mullett said he understands the difficult position the intervenors were in.

“To what extent are you getting a better deal from negotiating and reaching an agreement with the company than you would be litigating before the commission?” he asked. “At what extent is it less costly to negotiate than to litigate? This is a very expensive, taxing process when you have a case of this nature, and an opponent as formidable as Duke.

Despite the risks of pushing for more before a commission that has been very amenable to Duke over years of proceedings, Mullett said he cannot support the settlement.

“This is just one of those situations where you just have to say no, just have to resist, just have to oppose because it’s not right, it’s not in the best interest of my wife and I, and of other people like us who are paying these excessive extortionate rates for very inadequate service.”