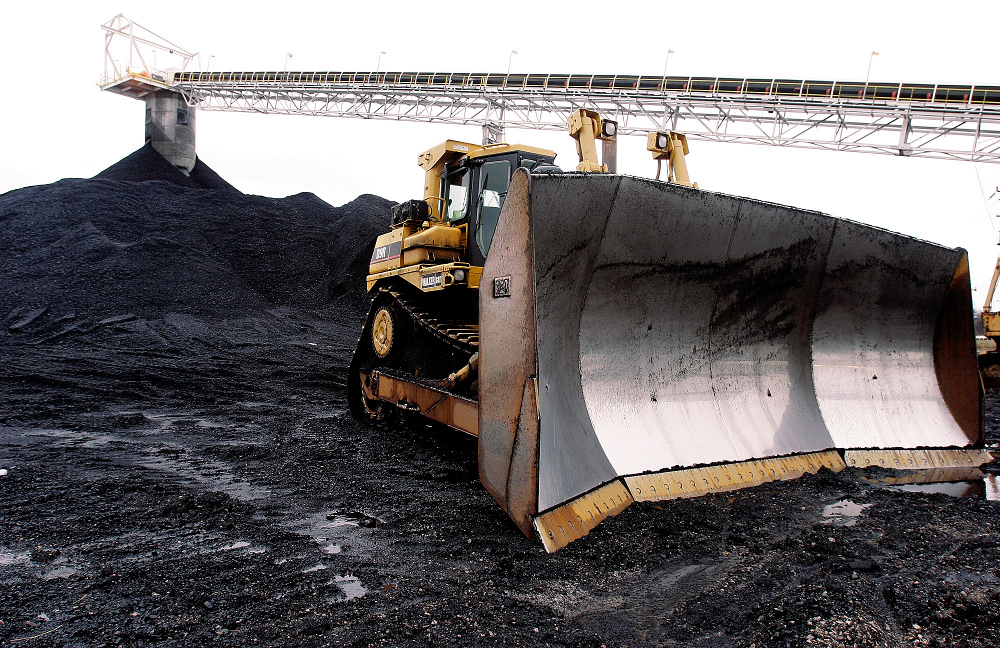 The Gateway Mine in Illinois is one of the properties Peabody Energy is offering as collateral for future cleanup costs.

Peabody Energy is one of the country’s largest coal companies, supplying power plants and steel mills around the world.

But in the past few years the company’s fortunes have plummeted, and environmental leaders don’t believe Peabody’s promises that, when the time comes, it will be able to pay more than $250 million to clean up its Illinois Basin mines.

Under federal law, mining companies must set aside money to pay for reclamation once mining stops. This is generally done through insurance policies known as surety bonds. But the government also allows companies in good financial shape to “self-bond,” promising that their own assets will be able to cover the cost of reclamation.

A decade ago, Peabody Energy would have been considered a robust company, and there were few concerns about its self-bonding arrangements.

Today it’s a different story. And industry experts doubt that the plan Peabody executives described on an earnings call earlier this month will do much to turn the tide, given the rapid retreat of coal-fired power and the slowing of China’s economy that’s a major factor in worldwide coal demand.

“The risk is that Peabody’s responsibility to clean up from its mining operations will be washed away in a bankruptcy proceeding, and Illinois taxpayers will be left holding the financial bag,” said Howard Learner, executive director of the Environmental Law & Policy Center (ELPC). “That’s unacceptable.”

The ELPC on February 12 filed citizen complaints on behalf of Illinois and Indiana residents calling on the states to require Peabody to revise its self-bonding agreements. If this doesn’t happen, the complaint asks for the federal Office of Surface Mining Reclamation Enforcement (OSMRE) to charge the company with violations of the federal Surface Mining Control and Reclamation Act of 1977 (SMCRA).

Meanwhile, Peabody is proposing a debt swap to shore up its finances, and offering three mines in the Illinois Basin and one in Arizona as collateral for credit holders. The Institute for Energy Economics and Financial Analysis (IEEFA) released a study this month arguing that Peabody’s financial predictions for the Illinois Basin mines are too rosy and “unsustainable,” potentially meaning more bad news for the company and for its mine reclamation prospects if those debts go bad.

“They pretty much think they can reduce their commitments through the bankruptcy process,” said IEEFA finance director Tom Sanzillo, former first deputy comptroller of New York and an expert on bankruptcy. “We’re very concerned about this, and the states are being reckless in how they’re managing a federal program.”

On the earnings call, Peabody CFO and executive vice president Amy Schwetz described 2015 revenues of $5.6 billion, down 17 percent from the previous year. In 2012, Peabody’s revenue was $8.1 billion.

Executives blamed the decline on falling coal prices and low sales volume, driven in part by a mild winter which has decreased demand for power, and on the slowing economy in China. They noted that coal revenues have been impacted by low natural gas prices, which make coal-fired power less competitive.

Peabody’s mines are concentrated in Australia and in the U.S. West and Midwest. Peabody has massive holdings in the Powder River Basin in Wyoming, which ships coal to power plants in the Midwest; and the company mines in the Illinois Basin, in Indiana and Illinois. The IEEFA says that coal prices in the Powder River Basin have dropped 19 percent since 2012, and prices in the Illinois Basin have dropped 38 percent since that time.

“There is no doubt our debt and equity are trading at distressed levels, which is indicative of the headwinds the industry is facing,” said Peabody CEO and President Glenn Kellow on the earnings call. “And, whilst we fully expect 2016 to be another trying year for the U.S. coal industry, we continue to believe that our leading positions in the lowest-cost basins will best position us to benefit from any rise in natural gas prices and coal demand over time.”

“This is moving fast,” said Learner. “You’re watching the coal industry deteriorate not because of the so-called war on coal – it’s simply not competing well in the market.”

Peabody Energy did not take questions after the earnings call and did not respond to a request for comment for this story.

[Update: Peabody provided a statement regarding its self-bonding practices, saying in part: “Peabody has an excellent record of land restoration, which we view as part of our social license to operate.  We have been meeting our restoration obligations for many decades, and we routinely spend tens of millions of dollars to pay for the restoration of lands that others have mined. All of our mines were reaffirmed for self-bonding eligibility last year in all states where we have self-bonding.  This includes affirmation by the state of Wyoming for our North Antelope Rochelle and Rawhide mines as recently as December of 2015.”]

Citing Peabody’s 2015 year-end financial results, the ELPC complaint charges that Peabody does not meet the federal requirements for self-bonding, that “the applicant has a ratio of liabilities to net worth of 2.5 or less and a ratio of current assets to liabilities of 1.2 or greater.”

Experts say that if Peabody Energy declares bankruptcy, its subsidiary would not be able to make good on the self-bonding and cover the costs of reclamation. The federal regulations on self-bonding, developed in 1983, make clear that companies with a chance of bankruptcy should not be eligible.

Companies are required to report to regulators if they have a significant deterioration in their financial condition. And even if they don’t report, it is regulators’ responsibility to keep an eye on the situation and ask the tough questions, in Sanzillo’s view. If a company’s position declines to the point that it can’t be trusted to cover its self-bonds, regulators have the power to demand a different reclamation guarantee.

With the debt swap, Peabody is hoping to reduce the principal of $1.5 billion in debt by $730 million, also reducing annual interest payments by $47 million.

“Relative to the overall size of the Peabody debt burden and ongoing net losses, the savings are too small to have a meaningful impact on company finances,” says the IEEFA report.

As part of its financial efforts, Peabody is selling its share of the troubled Prairie State Energy Campus in central Illinois. Peabody was one of the originators of the plant billed as an innovative “clean coal” “mine-to-mouth” operation fired by coal from an adjacent mine.

The cost of the plant and its electricity has ballooned beyond original projections, and Peabody reduced its stake to a 5 percent ownership while municipalities and power authorities across the Midwest have been saddled with deals forcing them to pay well above market rate for power. Peabody is now selling its share to the Wabash Valley Power Association for $57 million. According to the IEEFA’s analysis of SEC filings, Peabody has invested $246 million in Prairie State.

“They’re taking a haircut on this investment even though they’re saying they took a gain, which explains to me why they’re [potentially headed for] bankruptcy,” said Sanzillo. “They can’t tell a loss from a gain.”

A dark future for coal?

The precarious reclamation situation and the offering of three Illinois mines as collateral for Peabody’s debt swap could put pressure on the company to keep mines running that would otherwise be shuttered. This could contribute to a vicious cycle of increasing supply and diminishing coal prices.

“The continuation of the self-bonding while these companies are in financial distress creates the conditions for them to maintain mines that should be closed,” said Sanzillo. “It’s a zombie mine, a dead mine that’s still alive – chasing a ghost market.”

The Illinois Basin mines offered as collateral are the Wild Boar mine and Francisco Mine in Indiana, and the Gateway Mine in southern Illinois.

“If they can’t come up with the premium payments or no one will insure them, then they need to close the mines,” Sanzillo continued. “No, they don’t have the money for reclamation. So the state would have a claim. I would just sue immediately, get in line on their bankruptcies.”

An investigation released by Reuters in June 2015 noted that Peabody and the nation’s three other largest coal companies – Arch Coal, Alpha Natural Resources and Cloud Peak Energy – have $2.7 billion worth of future reclamation costs covered by self-bonding. Arch and Alpha, which have both declared bankruptcy, are also under federal scrutiny for their self-bonding practices.

“If the industry was disciplined and realized the price of coal isn’t sufficient to cover what they’re doing, they should be closing mines – to tighten the supply, to increase the price and do better,” Sanzillo said. “We look at the fundamentals – the price of coal won’t carry it any time for the foreseeable future. You cut through the smoke…and the mule can’t pull the cart anymore.”