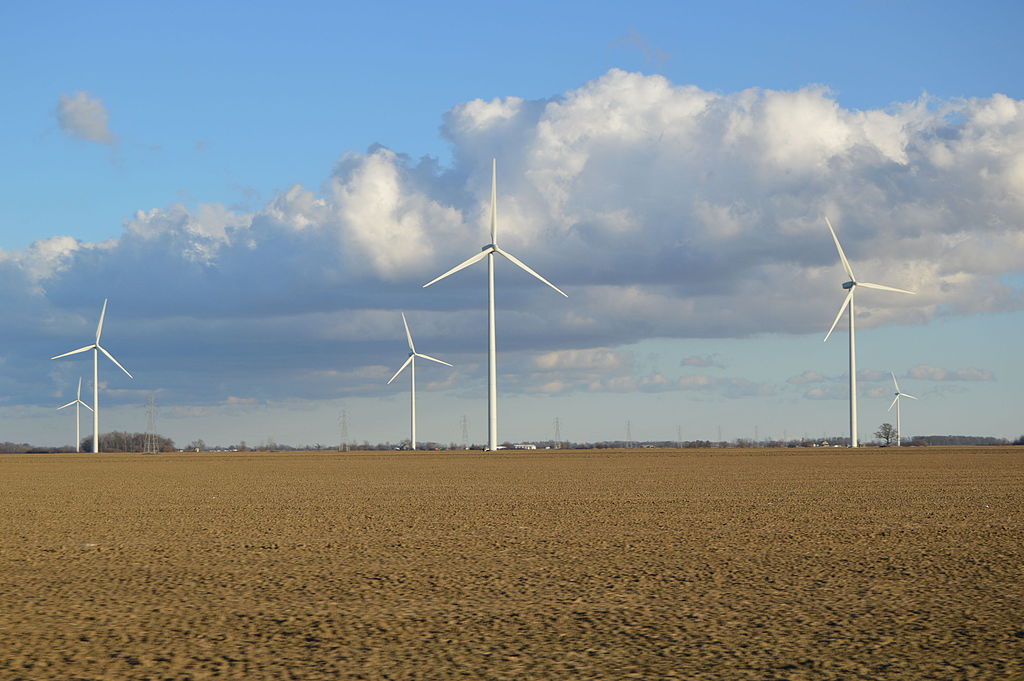 Advocates for environmental groups and the wind industry say an Ohio lawmaker’s arguments for keeping tougher wind turbine restrictions are flawed and inconsistent with how other forms of energy are treated, especially fossil fuels.

Last weekend Ohio state Sen. William Seitz (R-Cincinnati) and Kevon Martis of the Interstate Informed Citizens Coalition (IICC) co-authored a commentary for the Lima News in which they defended a 2014 law’s setback requirements for wind turbines. Seitz and Martis argued the strict terms are necessary to prevent “trespass zoning” from giving the wind industry a “secret subsidy.”

‘A fair amount of caterwauling’

The 2014 law, House Bill 483, effectively tripled existing requirements, so turbines on a commercial wind farm would have to be about a quarter of a mile (1,300 feet) from the nearest property line. Except for a few projects that already had permits, the law basically halted new commercial wind farms in Ohio.

A pending bill, HB 190, sponsored by Republican Reps. Tony Burkley and Tim Brown, would let counties decide whether to revert to the prior setback limits.

Among other things, the supporters argue that the 2014 law interferes with the rights of property owners to lease their land for wind turbines. Supporters also say the law dealt a severe blow to the economies of rural counties, especially in northwest Ohio.

IICC actively opposes HB 190. Although that bill is still in committee, Seitz and Martis felt this was the right time to speak out against relaxation of the requirements.

“There’s been a fair amount of caterwauling from the wind energy developers [about] the change that we made in 2014 to measure the wind setbacks from the property line rather than from the previous standard of the next-nearest house,” Seitz said. “Since that continues to be part of their caterwauling, Kevon Martis and I tried to explain the issue in terms that most people would understand.”

While the editorial talks about “nuisance noise,” Seitz said, “it’s not really only a matter of noise. You do understand that these things are very, very tall — that the blades can break.” He also referred to a January 2 wind turbine collapse in Northern Ireland.

“We really don’t think it would be a good idea to revert back to trespass zoning vs. property rights zoning,” Seitz said. “Otherwise we are letting the wind developers claim your property in satisfaction of their legal obligations. That’s pretty unheard of.”

“Take, for instance, Ohio’s natural gas unitization program, which gives fossil fuel developers an upper hand over property owners to gain access to the resources beneath their land — even when they’re unwilling,” she said. “This practice exposes landowners to all kinds of risks they never bargained for, and should be a bitter pill to swallow for those concerned about preserving private property rights in Ohio.”

“But, somehow, it’s not,” Williams continued. “Instead, lawmakers continue to grease the tracks for the oil and gas industry, but throw roadblocks in the way of wind and solar developers in the name of property rights. At a time when clean energy is so critical to Ohio’s economic and environmental well-being, we can’t afford to keep this double standard in place.”

Similarly, Seitz’s reference to the possibility for a blade to break seems to call for a “no risk” standard for wind energy, noted Dayna Baird Payne, a lobbyist who represents wind energy interests in Ohio. Other forms of energy are not held to a similar standard.

For example, she noted, pipelines less than a quarter-mile from homes have burst and spilled oil. A natural gas well blow-out in Monroe County required people to evacuate right before Christmas in December 2014. Accidents happen with nuclear and coal plants as well, she said.

Seitz had been trying since 2008 to require very strict setback limits for wind energy. He said the 2014 law’s limits were just the latest step in the legislature’s consideration of the issue.

The specific provisions were part of a mid-term budget bill and added by Ohio Senate president Keith Faber, Seitz said.

That action came right before the bill’s final discussion and vote in the Ohio Senate, however.

No one in the public got a chance to offer their views or present expert witnesses, Payne said. There was “not a single piece of statistical data, no evidence, no health and safety” testimony, she said.

As an example, she pointed to Ohio’s Blue Creek Wind farm, which has more than 1,300 people living within a mile of it. Since it began operating in 2011, neighbors have made only 24 complaints, and most of them dealt with TV reception.

“All complaints have been resolved,” Payne stressed.

Wind turbine noise also isn’t constant, especially since controls shut down the turbines in periods of high wind, Payne said. Also, according to GE, noise levels 300 meters away from a wind turbine are barely louder than a refrigerator.

“In an agricultural community there are going to be many daily outdoor activities which impact sound,” Payne added.

Indeed, other nonagricultural activities can make much louder noise at a homeowner’s property line. Yet some parts of Ohio allow noise levels of about 80 decibels to reach homes from natural gas pipeline compressor stations.

Seitz said such examples weren’t comparable to a wind turbine, because he was focusing on electricity generation.