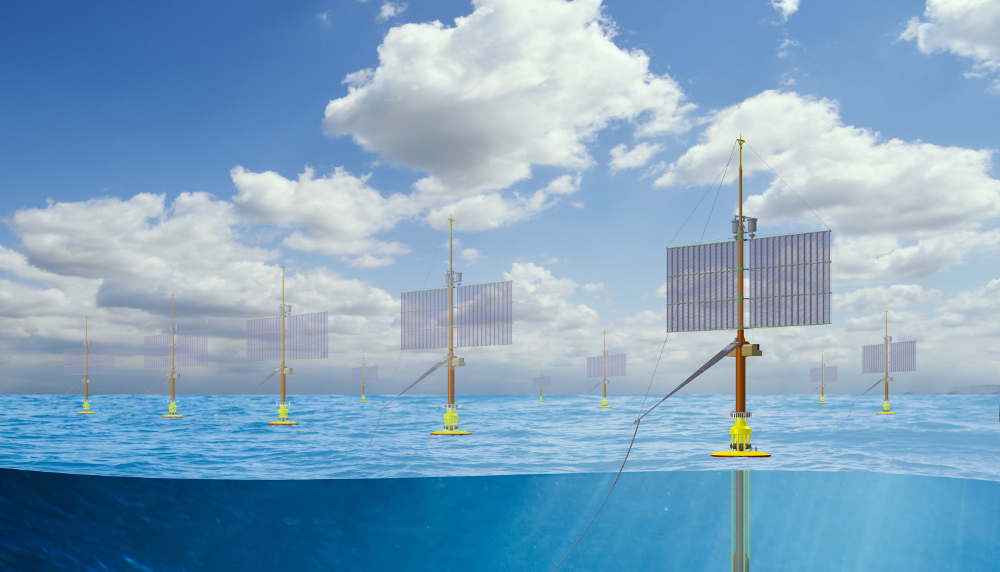 Editor’s note: This story has been updated with minor technical clarifications.

Taking its company name from a magic spell in the Harry Potter series, Michigan-based Accio Energy is developing new offshore wind systems that are “summoning energy out of the air.”

“We thought it was a little bit like magic,” Jennifer Baird, CEO of the Ann Arbor-based company, said when describing the company’s new wind technology aimed at cutting the cost of offshore wind in half. Baird, who started her career in commercial banking, is making her first foray into clean energy.

Using what’s called electrohydrodynamic, or EHD, wind systems, Accio is developing an alternative to conventional wind turbines. The technology works “similar to the physics of a thunderstorm,” Baird said, separating positive and negative charges carried on water droplets. The first-of-its-kind systems have no moving parts and consist of “wind-permeable flat panels composed primarily of mass-produced tubes that can be combined into arrays,” according to the company.

Accio’s goal is to lower the cost of developing offshore wind and increase its capacity factor while at the same time offering siting advantages.

In late 2015, the company got a boost through a two-year, $4.5 million award from the U.S. Department of Energy’s Advanced Research Projects Agency-Energy (ARPA-E) program to move toward commercialization. Accio is working with the University of Maine on a demonstration project off the Atlantic Coast.

Baird spoke with Midwest Energy News this week about EHD’s potential and how it could make the cost of developing offshore wind more competitive.

Midwest Energy News: How did you get involved with clean energy technology?

Baird: This is the first renewable energy company I’ve been involved with. I was introduced to Dawn White, one of the founders, by one of the investors involved. When I listened to her story and what she was trying to do and how important renewable energy is, I spent five months investigating that and became quite convinced we had an opportunity to be transformative.

Has the company always focused solely on offshore wind?

Yes and no. We’ve always focused on electrohydrodynamic wind, but in the beginning we hadn’t identified offshore wind as the best in the market. EHD was the basis on which the company was founded, but it became clear as we advanced the technology that offshore was its natural home and a the place we could be the most transformative.

From a market perspective, offshore wind has a tremendous problem with cost. We think we can cut the cost in half for offshore wind.

What exactly are electrohydrodynamic wind systems?

They work similar to the physics of a thunderstorm. There is the separation of positive and negative charges that builds up electric potential and you get a bolt of lightning. Our systems work on the same separation of charge principal, only we don’t get to the point where we have lightning.

EHD uses wind to separate the mist of positively charged water droplets that the panels emit. It’s kind of like the wind is catching the cloud, but we create the cloud. The wind pushes the positively charged droplets away to ground on the ocean surface and we harvest the electrons left behind on our device as a high voltage direct current.

We don’t have any blades or any other spinning parts. It’s generating electricity in a more direct fashion where we’re literally separating positive and negative charges and taking electrons left behind as high-voltage direct current.

They will be composed primarily of mass-produced panels that are combined into floating generator systems. We can make modular panels and ship them around the world much more easily than wind turbine blades, which are massive and difficult to move around. Everything we’re making is much more manageable because they’re all panel-based. We also think we’ll be able to float these in the ocean. We don’t have nearly as many challenges as wind turbines do, which need to be very stable.

At what stage is the technology?

With the ARPA-E funding we’re able to scale it up and do a sub-scale offshore demonstration off the coast of Maine. Everything indicates there is a lot of scalability inherent in the systems but at some point we have to prove that. That’s what the ARPA-E funding has allowed us to do — it’s a big step toward commercialization but we’re still a few years away.

Could this technology have applications in Michigan or other Great Lakes states?

It certainly could potentially be deployed in the Great Lakes, but we haven’t addressed questions of how you’d deal with ice. I’m not saying it’s not a solvable problem. We certainly can operate in fresh water, but it’s not clear how exactly you solve the ice problem. And to be frank, there is a lot more ocean than there are Great Lakes. We want to target a market that’s big enough to test the investment.

From the Michigan side, it’s as much about manufacturing. In the tier-two automotive supply chain, there are great plants that can use the same technology on auto parts to make the same parts we’re talking about.

What do you believe have been the barriers to offshore wind development in the U.S.?

I think cost is number one. Offshore wind is three to four times more expensive than onshore wind. In Europe, though, there is also the policy perspective. Europe is much more willing to think climate change is a problem and do things about it, but they have much greater limitations on land (for onshore wind). It’s harder for them to do onshore, so they’ve moved offshore more aggressively.

Five to eight years ago when we started, there was a lot less consensus than there is today about climate change. We feel we should do as much as we can to shift energy generation to low carbon on all fronts.