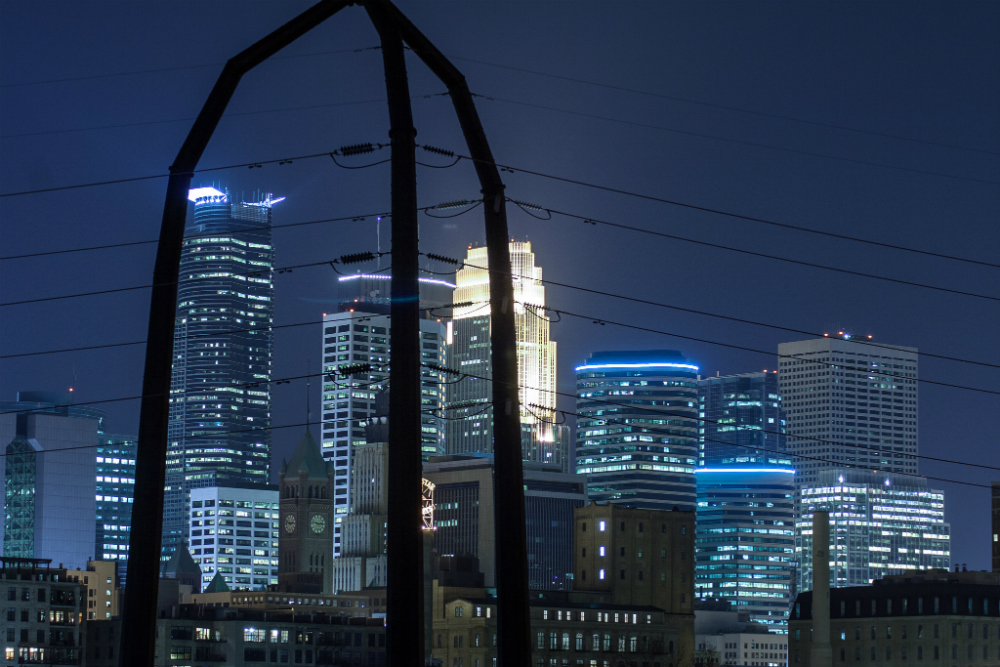 Now into its second year, a unique partnership between the city of Minneapolis and two utilities is receiving national recognition and praise from clean energy advocates.

That followed a January event at the White House where officials from the city and Xcel Energy were recognized by the Department of Energy for a software program that helps building owners to better understand their energy use.

The partnership – the first of its kind in the country – brings together the city of Minneapolis, Xcel and the natural gas company CenterPoint Energy in an effort reduce greenhouse gas emissions through efficiency programs, renewable energy options and other approaches.

“We were mobbed when we walked out of the (White House) meeting by people interested in doing what we had done in their cities,” said Stephanie Zawistowski, a policy aide for Mayor Betsy Hodges who did the presentation in Washington with Xcel policy and outreach manager Bridget McLaughlin Dockter.

Energy expert John Farrell likes the progress the partnership has made. He and a group of allies led a campaign that had lobbied for a referendum on that would have transferred ownership of the city’s power grid to Minneapolis from the city’s two utilities. The result was not a referendum, but the Clean Energy Partnership.

The partnership was “an acceptable compromise we could use to achieve the city’s climate action goals,” he said. “It seems to be going pretty well.”

Utility representatives participating in the program agree. “I feel this Clean Energy Partnership is on track for what we hoped it to be and wanted it to be for the city, Xcel and Centerpoint,” said Laura McCarten, Xcel’s regional vice president. “I think it’s going very well.”

A first year in review

The partnership came out as a result of a push by Farrell and other activists to have Minneapolis create and own its power company, a move Boulder, Colorado has embarked upon.

The campaign, called Minneapolis Energy Options, came about prior to the renewal of the city’s franchise agreement with Xcel and CenterPoint in 2014.

Around the same time, the city passed its aggressive Climate Action Plan calling for an 80 percent reduction in greenhouse gases by 2050 – and 30 percent by 2025.

Neither the utilities, which didn’t want to lose customers, nor the city, which had concerns about legal battles, had a strong appetite for municipalization, though.

The resulting compromise was the creation of the partnership and a much shorter franchise contract – 10 years, rather than the usual 20, with a review at five years to determine if the progress is being made, said Zawistowski.

The first year of the partnership was focused on governance and formation of the Energy Vision Advisory Committee, or EVAC. The committee developed – and saw adopted – a workplan and a series of accompanying metrics to determine if programs are making real progress, she said.

But beyond the startup phase came tools and programs to reduce greenhouse gases. The novel web-based platform the partnership received recognition for in Washington allows building owners with multiple tenants to see how much energy an entire structure uses, said Dockter.

Part of the reason for developing the software – now part of the DOE’s Better Buildings Energy Data Accelerator platform – was to help building owners comply with a city mandate that requires disclosure of energy use for structures of 50,000 square feet or more, she said.

The tool “aligns with the benchmarking ordinance and simplifies the process,” Dockter said.

The utilities launched a second program last October that offered multi-housing owners an opportunity to have whole building energy audits for gas and electric use, said Becca Virden, spokeswoman for CenterPoint.

The audits give owners a variety of options for reducing energy loss and heat loss from no cost to more expensive repairs and equipment replacements, she said.

Both utilities have a program they co-sponsor called Home Energy Squad that for $70 gives homeowners a list of improvements they can make to reduce energy.

The partnership piloted a program that offers free audits for economically disadvantaged households in buildings with one to four units. Rather than simply offer suggested improvements, Virden said, the Home Energy Squad will make the suggested changes – insulation, weather stripping, and so forth while at a site, she said.

For more expensive projects, such as air sealing, a program offers zero interest loans. Seventeen residents signed up for loans averaging $4,500 each.

The Home Energy Squad pilot went so well – 145 visits last year – that the partnership may increase the number to as many as 300, according to its website.

Another pilot program involved inserting a notice into city water bills telling residents they could get low flow shower heads free. CenterPoint offers routinely offers the same deal to its customers and the water bill “provided another channel” to reach residents.

“It was very successful – many Minneapolis residents took advantage of the offer,” she said.

Xcel and CenterPoint already have many programs to help middle class and low income residents reduce energy bills, Virden said. The issue for the EVAC committee now will be to design ways to reach people who rarely even consider their energy use.

“The challenge is how do we get folks to think about energy period, and then how we can help them save on energy usage and save on their overall bill, and therefore their carbon footprint,” she said.

Another partnership goal has been to encourage the city to offset power use through renewable energy such as solar. The city council and the Met Council negotiated agreements with several solar developers earlier this year to move to renewable energy for government operations.

The three partners in the CEP agreed to contribute $10,000 to pay for a consultant to work on community engagement strategies to promote energy efficiency in hard-to-reach pockets of the city. Whether the focus will be on geography or ethnicity remains to be determined, said McCarten.

The programs piloted last year will be continued and expanded. And the partnership may look at requiring energy disclosure data for multi-family housing. That would allow building buyers and renters to see how much they will spend on energy, said McCarten.

Expanding that idea to single family homes may include creation of an energy certification program and inclusion of energy use in truth-in-housing data, she said.

For homeowners who want to invest in efficiency a certification could offer a benchmark of the sort now only available to commercial buildings.

Farrell wants the partnership to look into having utilities offer customers a way to pay for efficiency improvements through an additional charge on their bills. Such on-bill repayment has been tried by electric cooperatives, he said, with great success.

The utilities could engage a financial institution to assist in offering the program and set up a loss reserve mechanism should a customer fail to pay off the loan. While the program would be open to all residents, those with low incomes would pay no interest, he said.

The improvements would reduce bills enough so customers wouldn’t see huge increases on their bills, he said. The default rate is well below 1 percent for such programs, Farrell added.

Such a program, along with reaching more low income residents, are keys to the partnership’s progress. The partnership’s goal of having 75 percent of renters, homeowners and rental property owners participate in an energy retrofit program cannot be reached without a more aggressive outreach and funding program.

“The things we’re going to watch for to ensure accountability is that these two initiatives – community engagement and bill repayment – can get through because we think they’re essential to making the partnership successful,” he said.