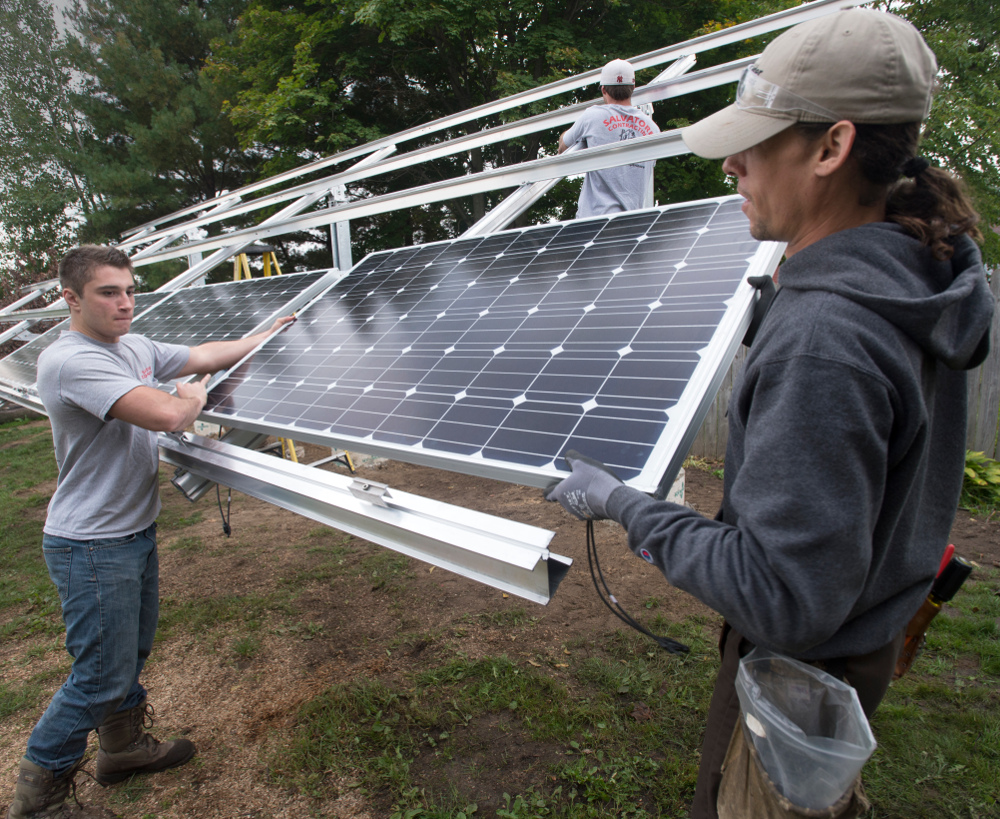 Crews install solar panels at a home in Thomas Township, Michigan in 2014.

The Union of Concerned Scientists says Michigan could turn a $105 million public investment into roughly $3 billion in private sector clean-energy projects through 2030.

Michigan would join a growing number of states using the model to leverage clean-energy investment, which has already happened in places like New York and Connecticut.

“We started to look outside the box,” he said. “This is not a substitute for clean energy standards, but it’s one way to continue moving the ball forward while the Legislature continues to debate.”

State lawmakers are yet to finalize the next phase of Michigan’s energy policy. The last major revision — which set a 10 percent renewable energy standard — leveled off at the end of 2015.

While Gomberg says green bank financing is unlikely to achieve the same results as a 1.5 percent efficiency standard or a target percentage for renewables, “There are some ancillary benefits to this.”

“Not only does a green bank insert direct capital into these investments, but it also helps get the financial sector more comfortable,” Gomberg said.

The UCS modeled a program that takes a one-time $105 million public investment and leverages it into $3.3 billion in private development through a 15-year revolving loan program. The public investment could come from existing state funds or by issuing bonds to private investors.

By using a variety of financial tools — including credit enhancements and direct lending — to attract a pool of private investments, the UCS report says a Michigan green bank could support the deployment of 685 megawatts of new solar power and save ratepayers $322 million annually through energy efficiency.

Additionally, the program could reduce the state’s carbon emissions by 3.9 million tons per year, or 13 percent of the emissions reduction target for Michigan under the Clean Power Plan.

According to Advanced Energy Economy, a national trade group for clean energy development, green banks are among four trends to watch this year in energy finance.

According to the Coalition for Green Capital, which offers support to states exploring the green bank concept, another seven states and Washington D.C. are exploring the idea. A proposed $13 billion constitutional amendment in Ohio meant to drive clean energy infrastructure also reportedly includes the formation of a green bank.

And in December, the Global Green Bank Network was established during the Paris climate change negotiations.

But finding public funding remains a challenge for states, according to the Brookings Institute.

“In state after state,” Brookings noted in June, “strong interest in green banking or strong demand for green bank products has collided with the limited resources available to capitalize the new institutions.”