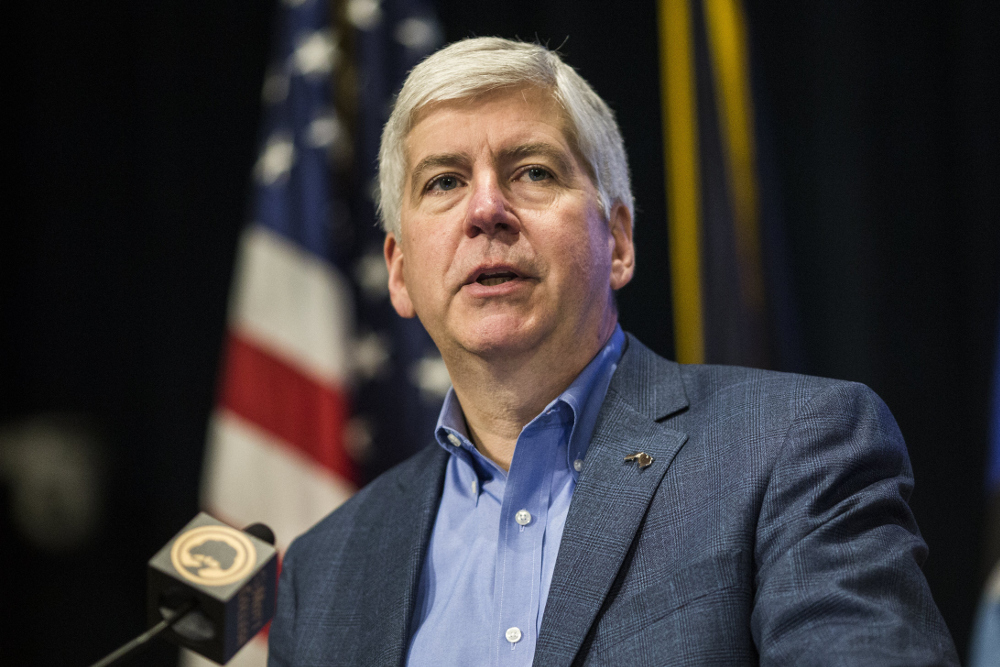 Michigan Gov. Rick Snyder’s statewide 30 percent clean energy goal by 2025 wouldn’t necessarily expand renewable energy at all — a realization that was slow to reach the public, according to emails released earlier this month in relation to the Flint water crisis.

As first reported by ClimateWire last week, a policy brief prepared for the governor’s office suggests that the media had been misreporting Snyder’s energy plan by saying a 30 percent clean energy goal could be met with a combination of renewables and energy efficiency.

“If asked: the media has finally figured out that the 30% goal by 2025 language from your energy message that made it into legislation doesn’t actually involve building any more renewables,” according to the email.

Michigan reached a 10 percent renewable mandate by the end of 2015, as required under a 2008 law. That target is in place — as well as a 1 percent energy efficiency standard — until a new policy is crafted. Both chambers of the Legislature continue working on separate comprehensive energy proposals, which aren’t likely to include an increased renewable standard.

Snyder outlined his energy plan in a special message one year ago, which gave various scenarios for meeting energy goals based on natural gas prices. Basically, Snyder’s 30-40 percent window envisions between 0 and 10 percent more renewables. If natural gas prices are below renewables, then the build-out of renewables would be less, and vice versa.

As coal plants retire, Snyder said at the time: “We will have less coal and more natural gas and renewables.” He also said that renewables can help protect ratepayers from “big price swings” with natural gas.

Clean energy advocates say Michigan could expand its renewable energy standard by simply continuing on the same course since 2009, and that a 30 percent target is weaker than it sounds when you factor in efficiency.

“Therefore, you may get asked about this. You can reiterate that you think that based on economics alone, you would expect between 30-40% of Michigan’s energy to come from a combination of energy waste reduction and renewables. Therefore, while you support the goal, economics alone will likely end up having us exceed that,” the agency continued.

Snyder spokesman Ari Adler confirmed that a 30 percent “renewable energy goal” could be met by only building out natural gas. The percentage would be higher as renewables are added, Adler said in an email to Midwest Energy News.

He added that it would be “inappropriate for me to guess” the meaning of the suggestion that the media “finally figured out” the governor’s energy goals.

The energy talking points were among thousands of pages of emails released earlier this month in relation to the Flint water crisis. The executive office is exempt from Freedom of Information laws, but Snyder has agreed to voluntary release communications from his office.

A month before the governor was briefed, the House Energy Policy Committee — made up of a Republican majority — passed an energy bill package out of committee that included a 30 percent “goal” by 2025. The goal was proposed by Democratic Rep. Julie Plawecki and was supported by Snyder.

Since that committee vote, advocates say they have been pointing out that a 30 percent goal wouldn’t necessarily include more renewables.

“That’s why we’ve been talking about a 40 percent goal for a while,” said Liesl Eisler Clark, president of the Michigan Energy Innovation Business Council.

The Michigan Environmental Council told ClimateWire that 40 percent “would better reflect a significant commitment to clean energy moving forward.” Last week, the Sierra Club called on legislators to expand the renewable standard to 30 percent by 2030 and increase the state’s energy efficiency standard to 2 percent of utilities’ electric load.

Larry Ward, executive director of the Michigan Conservative Energy Forum, said it was “kind of nice” to get a glimpse of the administration’s thinking on energy, but he agreed with the overall content of the email.

“We don’t get to hear the governor often enough on this,” Ward said, referring to energy policy. “Frankly, the language and everything in it were things we had been saying.”

The talking points also hit on Snyder’s position on the Clean Power Plan compared to that of Republican Attorney General Bill Schuette.

While Snyder has halted plans to develop a statewide compliance plan in the wake of a recent U.S. Supreme Court decision, he drew praise in September when he announced a plan to comply. Meanwhile, Schuette has been on the front lines of fighting the carbon rules as well as the EPA’s Mercury and Air Toxics Standards before the Supreme Court.

Modeling done for the state as part of the Clean Power Plan compliance showed Michigan would not need to make significant changes to comply until 10 years into the plan.

“If asked, we recommend downplaying any conflict with the AG and noting Schuette has said he is optimistic about the plan your administration is developing,” the email says.

The initial modeling results “show that Michigan may not have to do anything at all to comply with the carbon rule for at least a decade (beyond what we are already planning to do in terms of plant retirements, and maintaining our levels of waste reduction (1%) and renewables (10%)),” the brief continues. “That will likely be the headline, and will make things awkward for the injunction request Schuette is pursuing on the basis that we have to do so much out of the gate we need the court to stop this now.”

The attorney general’s office declined to comment for this story.