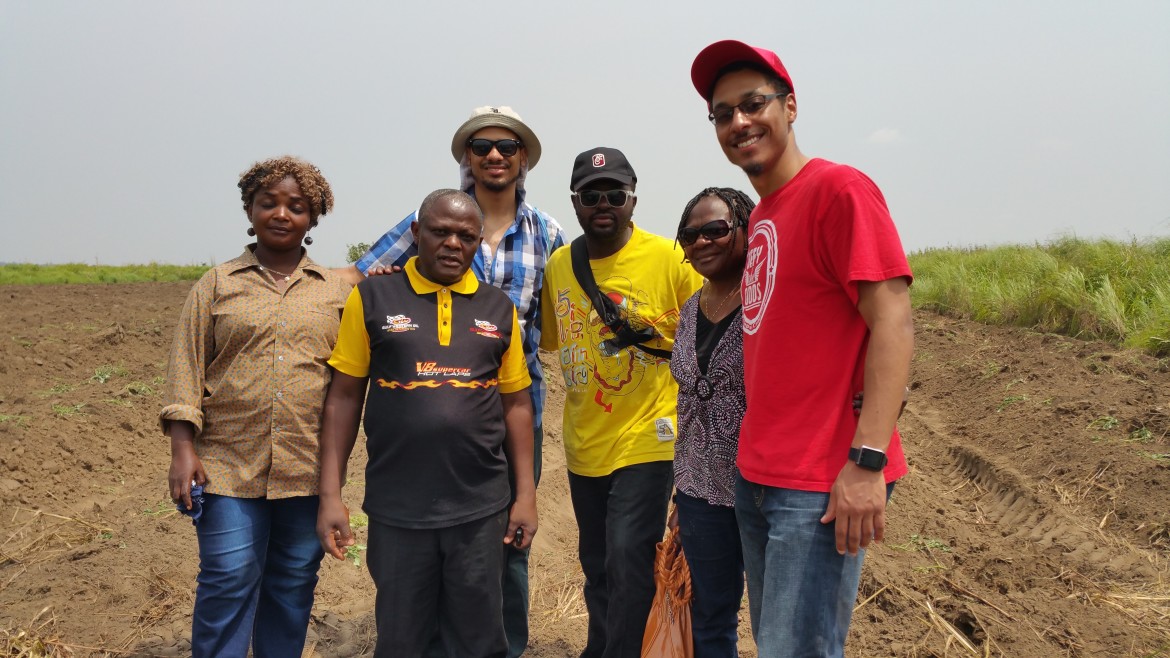 NovoMoto co-founder Aaron Olson (in red shirt) along with his family in the village of Mboka Paul, DR. Congo in 2015.

Self-driving electric cars, solar-powered systems for the developing world, energy efficiency software and all-in-one home heating and cooling systems are among the entrants that will square off at the sixth Clean Energy Challenge in Chicago on April 12.

Finalists selected through a months-long process that involves mentoring and advising will present their pitches in search of $1 million in cash prizes plus investment and attention from the industry leaders, angel investors and other experts at the event.

Since its inception, the challenge – run by the Clean Energy Trust – has meant $2.2 million in funding and $62 million in additional investments, creating 300 jobs, according to the organization.

Organizers note that the pitch competition and accelerator program has helped more than 80 startups take off. Finalists for 2016 were announced in February, with student and early-stage categories.

The challenge’s website says: “The Challenge has jumpstarted more than 60 startups in the Midwest to date, including: LuminAID, a then-student company who after winning $100,000 at the Challenge went on to become a Shark Tank Season 6 success story; Detroit’s GreenLancer, who has since gone on to raise $5 million in Series B funding; Chicago’s AMPY, who after winning at the Challenge launched a national Kickstarter campaign which raised $309,000.”

Below are four of this year’s finalists:

Aaron Olson was born in the Democratic Republic of Congo. He moved to the United States as a young child, but now the PhD candidate at the University of Wisconsin-Madison is hoping that clean energy technology he is developing with a fellow doctoral student can bring cleaner, cheaper and more accessible electricity to his relatives and their neighbors in Mboka Paul, the town where he was born.

Olson notes that in the three western provinces of the Congo alone, 3.5 million homes lack electricity. Most use kerosene lamps for light and charge their phones on diesel generators. This is expensive and creates unhealthy fumes and greenhouse gas emissions.

NovoMoto, a startup founded by Olson and Mehrdad Arjmand, would install a solar PV micro-plant to generate electricity, and distribute portable batteries that locals could recharge at the plant for a fee. They plan to enlist local entrepreneurs in the town of Mboka Paul and surrounding areas to run the operation.

“There are a lot of communities without access to reliable electricity, but it’s difficult to go into a community and propose an alternative solution without buying from key stakeholders – business owners already selling prepaid phone cards, water, medicine,” said Olson. “So it makes sense to start a project like this in an area where you already have connections.”

The duo are developing software that will allow entrepreneurs to charge energy users a rate by the kilowatt hour, like a traditional electric bill, and payments can be made through a mobile phone. They say that under their system, locals could pay $9 for enough power to run three 3-watt LED lights, to charge a cell phone and to operate low-power radios or TVs for a month. Currently, people pay about $22 a month for kerosene and phone-charging via diesel generators, Olson said.

They hope their model is one that can be easily replicated in sub-Saharan Africa, where 600 million people lack electricity, a number expected to grow to 700 million by 2030, according to the United Nations.

This is the first solar project for the founders, but they are drawing on microgrid experts at the University of Wisconsin and looking to the Clean Energy Challenge for mentorship as well as potential seed money. Arjmand said they’ve met people with experience on energy projects in Cameroon through the challenge.

“We can draw on experiences these people have had on the ground in Africa,” he said.

Olson, who was last in the Democratic Republic of Congo a year ago, said they are hoping to be able to deliver the prototype by the end of the year – and locals are waiting eagerly.

“You wouldn’t believe how many times I get Facebook posts or text messages from my cousins – ‘How’s it going, when are you coming back?’” he said. “There’s a lot of energy behind this.”

A fleet of small, quiet cars dashing around college campuses, retirement communities, military bases or other locales where 35 miles per hour is fast enough…charged by the sun, personalized and activated with a few swipes on a smart phone…offering rides more efficiently and cheaply than cabs or ride-share companies and evading the plague of campus parking.

Innova proposes using small electric cars like this one for car-sharing on college campuses and similar environments.

Ohio State will feature driverless cars in coming months as that technology is rolled out. In the future, said founder and CEO Roman Kuropas, the driverless versions of the Dash electric vehicles developed by Innova could be swarming campuses and small communities nationwide.

“Their challenges are parking and reducing emissions on campus,” said Kuropas. “This is providing solutions that address their biggest challenges in a sustainable way. This is bigger than just a car or software.”

The company advertises the cars and the larger system as perfectly suited to millennials, who want things sustainable, customized and “smart.” The cars’ batteries can be charged in about 30 minutes from a network of stations, ideally solar-powered. Rides will be subsidized in part by digital advertisements that play on a 12-inch screen inside the car.

“We are an internet of things on wheels,” said Kuropas.

Through Bluetooth and a partnership with Verizon, the GPS-enabled cars are also programmed to play a rider’s favorite music and integrate with digital campus security systems, offering an alert system or choosing a safe route for riders at night. The car has no fuel cost and no carbon emissions beyond the manufacture and installation of the charging stations. Through their digital connections and sensors, the cars can also collect data on traffic patterns, weather and other factors.

In the 1980s, Robert Pricone broke new ground on a common object that people see hundreds of times a day but usually take for granted: traffic signs. Pricone developed multi-prismatic, micro-structured material used to coat traffic signs and direct the light from car headlights directly back to the driver, making the signs highly visible.

Today, Pricone’s company, 10x Technology, uses a derivative of that same technology for a host of energy efficiency and energy-related applications. The ability to capture and direct light is crucial for films placed on the inside of windows to increase natural light, by directing it to the ceiling where it bounces back down into the room, decreasing the need for artificial light and saving energy. This ability is also used on the lenses of LED lights, to diffuse their glow more powerfully into the room and reduce the number of light fixtures needed by about 30 percent.

In solar concentrating plants, the technology is essentially reversed to focus the sun’s light on a silicon chip, increasing the power and efficiency of the plant. Pricone said a million of the company’s lenses are used in the world’s largest solar concentrating facility, a 30-MW installation in Alamosa, Colorado.

“Each lens works just like a magnifying glass, it captures light and concentrates it, allowing you to use less silicon,” said Pricone, the president and founder of 10x. “It’s the next generation of solar.”

10x’s technology involves embossing hot polymer sheets with 22,000 identical micro-prisms per square inch, standing just .14 microns high, about 1/300th the thickness of a human hair. The products are made to order for different companies, produced in large sheets that can be cut to size.

10x partner Tom Migala noted that the micro-structured materials can also be used to reduce friction on the skin of an aircraft or vessel going through the air or water, reducing the amount of fuel used, as well as in medical applications.

“There are so many places you could use a micro-structured material,” said Migala.

Typically, systems that heat the air or hot water in a home burn natural gas or oil, while separate cooling systems use electricity to suck hot air out of a home. ThermoLift uses an efficient natural gas system and Vuilleumier heat pump (VHP) for heating and cooling all in one unit, with significantly greater efficiency and lower emissions than most systems.

ThermoLift was founded in 2012 by CEO Paul Schwartz and Peter Hofbauer, a German scientist and long-time engineer and executive at Volkswagen, with 100 patents to his name. The company is housed at the Advanced Energy Research and Technology Center at Stony Brook University in New York.

Schwartz noted that when air conditioners are run on electricity coming from power plants, energy is lost in inefficiencies throughout the generation and transmission process. ThermoLift’s ultra-low-emission natural gas burner, by contrast, is highly efficient for both heating and cooling.

“If you burn that fossil fuel at a power plant, only 35 percent of the energy gets to your house,” said Schwartz. “But if we use that heat energy at the source, in a commercial or residential building, we can produce that cooling effect with a reduced carbon footprint. It’s really counterintuitive – if you ignite natural gas you get this high temperature source…our unique thermodynamic process allows us in pumping heat to do something very similar to what we do in a refrigerator or air conditioning system.”

The system works well even in extremely hot and cold temperatures, Schwartz said, and the similar technology can also draw on geothermal energy instead of heat from the air.

After starting with private funding, the company received $750,000 in Department of Energy funding in 2013. Last summer, ThermoLift announced $2.75 million in venture capital funding.

Schwartz said the potential investment and, even more importantly, the networking and advising that the company has received through the Clean Energy Challenge should help them meet the challenges of bringing the systems to the commercial market within several years.

“Developing technology companies need to build on the networks that have been developed, and the Clean Energy Challenge allows us the opportunity to expose ourselves through those networks,” said Schwartz. “The networking opportunities are equally if not more valuable than the monetary opportunity it presents.”