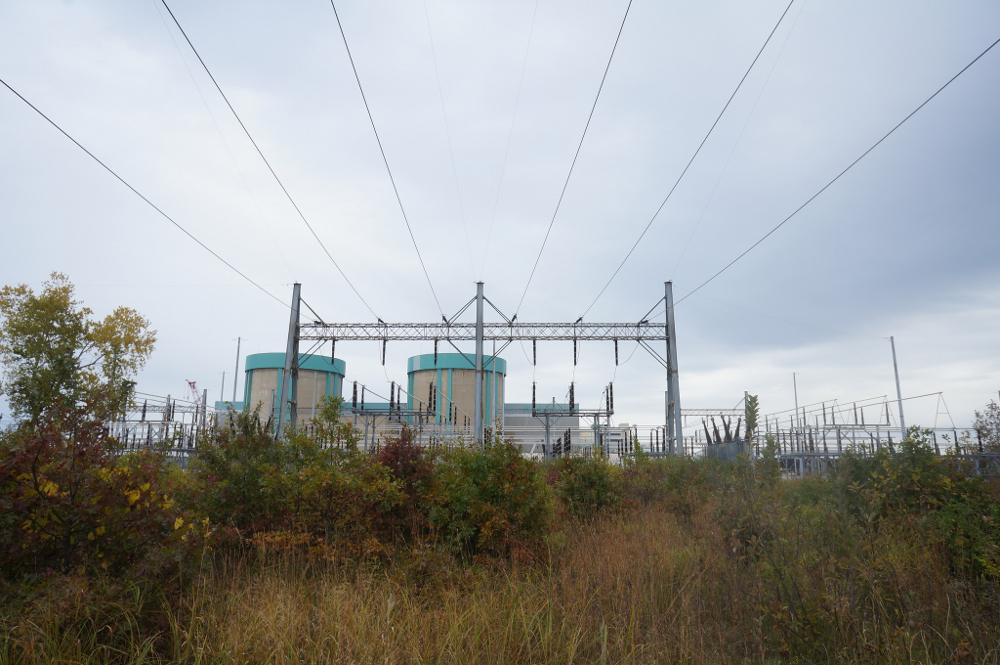 The Zion Nuclear Power Station in Illinois was retired in 1998, and waste has been stored on site ever since.

Half a century ago when the town of Zion, Illinois agreed to site a nuclear power plant on its Lake Michigan shoreline, civic leaders felt they were helping to secure a clean and dependable energy source through the turn of the century.

They never intended to become a nuclear waste dump.

But since the Zion plant closed in 1998, waste has been stored on-site as it is at working and defunct reactors across the country. And since neither a permanent geologic repository nor proposed interim storage sites for nuclear waste have been created, the waste may remain in Zion for quite some time.

“In 1968 nuclear power was relatively new – this was going to be a generation source that would provide very cheap electricity, Zion was excited to be a part of this,” said Zion Mayor Al Hill on Tuesday at a Chicago hearing sponsored by the U.S. Department of Energy (DOE) aimed at developing a consent-based siting process for nuclear waste storage.

“We thought it was good for our community, for the state of Illinois, for the United States,” Hill said. “Residents understood that we would give up 400 acres of lakefront, an eyesore would be there for a very long time, access to the lake would be extremely limited, economic development opportunities associated with the lakefront would be inhibited.”

But city leaders decided it was worth it, in part because, “There was an understanding that when the operating license of the plant expired, these 400 acres would be returned to pristine condition,” Hill said. “That was the deal – it was an unwritten deal but that was the deal the people of Zion understood. There was never an understanding that once the plant closed the people of Zion would play host to a radioactive dump.”

The Chicago hearing is part of a new Department of Energy effort aimed at avoiding situations like the debacle surrounding efforts to build a permanent repository at Yucca Mountain and other controversies regarding the storage of nuclear waste. The process will include public comments in the Federal Register, public meetings around the country, webinars and small group meetings, with a summary of the findings to be published in late 2016.

The process builds on a Blue Ribbon Commission launched in 2010 to study the waste issue.

“We need a completely open and transparent process – I can’t emphasize that enough,” said Robert Rosner, a University of Chicago professor who helped lead the hearing. “Ensuring the siting process itself is viewed as a win by everyone involved. There shouldn’t be any folks who view themselves as losers in this process. This means the process needs to be structured in such a way that there’s competition for siting the repository – that there are folks who actually want this rather than folks trying to get out from under it.”

There are about 70,000 metric tons of spent fuel from power generation stored at operating and defunct commercial reactors and a small number of sites managed by the Department of Energy nationwide. Waste is usually stored in pools for about five years, and then moved to dry casks.

Illinois has the most reactors and waste sites of any state, with the decommissioning Zion reactor and six operating plants. About 2,200 metric tons of waste are being produced each year, and currently operating reactors will over their lifetime bring the total inventory to about 140,000 metric tons of spent fuel, according to the government.

In remarks delivered by video to the Chicago event, Energy Secretary Ernest Moniz stressed that no specific sites for permanent or interim storage are currently being considered; rather the department is seeking input on how to construct a consent-based process to choose sites so waste can be removed from individual reactors.

“This system of managing this material is less secure and less permanent than either an interim storage facility or a geologic repository,” Moniz said. “Moving forward with a workable plan is also critical to making sure nuclear power remains an option for low-carbon electricity.”

Speakers said that Finland, Sweden and Canada have undertaken successful consent-based siting processes. In small group discussions and public comments in Chicago, participants emphasized the need for transparency and for the DOE to gain the trust of a skeptical public.

Some proposed creating a new entity or agency to carry out the process, since there is a “long history with DOE.”

Some compared the issue to genetically modified foods, worrying that “what people don’t know can hurt them,” as one group put it. They expressed concerns about trains, trucks and barges carrying nuclear waste through communities to storage sites. Some questioned whether new storage sites are necessary, and proposed turning reactor sites where waste is currently stored into interim sites.

“If it’s a safety issue, then why has it been safe to keep the nuclear waste there for as long as we have?” asked Gail Snyder, board president of the anti-nuclear group Nuclear Energy Information Service. “Don’t fall for an idea that this is unsafe to keep it where it is and now we have to move it. I would say it is unsafe, but it’s not going to be safer somewhere else.”

Speaking on a panel before the group discussions, environmental activist Kim Wasserman-Nieto stressed the need for a meaningful consent-based process, not a token one with a predetermined outcome.

“An open transparent process has to be more than checking off a box on a checklist that says, ‘Yeah we talked to communities,’” said Wasserman-Nieto, strategy director of the Little Village Environmental Justice Organization, which led a fight to close Chicago’s coal-fired power plants.

“Are things being written down?” she asked. “Is there a framework for the community to understand all the points of insertion they may have? What laws they have to back them up? A lot of times communities are sold on the notion of jobs and economic benefits…because we may be economically distraught, no one wants to talk about the health impacts…what’s the health cost, what’s the mental cost?”

Hill said that in the past, there were up to 800 employees at the Zion plant and the owner, ComEd, paid up to $19 million in taxes. Today the jobs are gone and taxes amount to just about $1.5 million, he said.

“Someone needs to get the fuel rods out of there or compensate the Zion community for becoming a de facto waste storage facility,” Hill said. “We’re not naïve enough to believe these rods will be moved any time soon.”

John Kotek, DOE acting assistant secretary for the Office of Nuclear Energy, said that the department plans to make grants to local governments, states, communities and tribal nations to participate in the consent-based siting process. He said the department has requested $25 million from Congress for such grants.

Meanwhile some attendees questioned whether a true consent-based siting process is possible and argued that no fully-informed communities would consent to hosting nuclear waste.

“It will be very hard to find communities that will be willing,” said Wasserman-Nieto. “We really need to stop the creation of this waste to avoid having these conversations every couple years.”

During the public comment period, Kevin Kamps, radioactive waste watchdog of the anti-nuclear organization Beyond Nuclear, argued that Native American leaders have been offered financial incentives in an effort to coerce them to accept radioactive waste.

“I begged and pleaded with the Blue Ribbon commission, do not target Native American tribes again for these dumps,” said Kamps. “This is an environmental injustice, this is radioactive racism.”