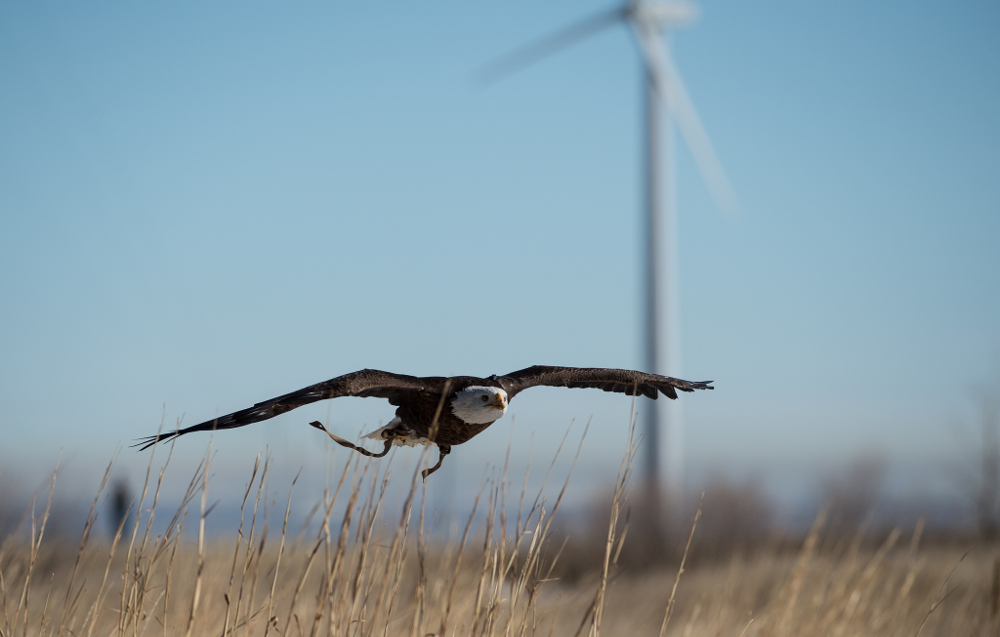 An eagle flies near a wind turbine during a National Renewable Energy Laboratory research project in Colorado.

A conservation group has identified three Midwest wind projects among ten nationally that it says show a need for greater regulation to protect birds.

Michael Hutchins, who directs the American Bird Conservancy’s Bird-Smart Wind Energy Campaign, says wind turbines are likely to cause excessive mortality rates when they are located along heavily used migration routes or near important habitat where birds tend to breed or feed.

Two of the projects — in North Dakota and Kansas — lie along migration paths for the federally endangered whooping crane, according to the Conservancy. And at the Kansas site, located about 30 miles south of the Quivira National Wildlife Refuge, a 66-mile-long transmission line and associated towers would pose additional hazards, the group said.

In northwest Missouri, the proposed Rock Creek wind farm could threaten some of the migrating birds that use the Squaw Creek National Wildlife Refuge for a pit stop, according to the Conservancy. Late in the fall, the refuge typically attracts around one million snow geese, as well as several hundred bald eagles and a smaller number of trumpeter and tundra swans.

“There’s plenty of data to suggest that plenty of birds are being struck by the blades on these turbines,” Hutchins said. “Hundreds of thousands at a minimum.” A 2013 study estimated the annual bird loss from wind turbines at between 140,000 and 328,000 in the contiguous U.S. Prior studies have estimated between 10,000 and 573,000.

All of the estimates pale when compared with bird deaths due to other factors, said John Anderson, the American Wind Energy Association’s senior director for permitting policy and environmental affairs.

“In comparison with other structures and environmental toxins which are responsible for killing between 490 million and 2.9 billion birds every year,” he said, “wind energy will never be more than an extremely small fraction of human-related bird fatalities.”

Hutchins conceded that, “Wind is not taking as many as feral cats. There’s no doubt about that.” But he said it’s important to consider the species involved, and whether the losses are robins from the backyard or endangered whooping cranes making a stop along their migration route.

The American Bird Conservancy seeks changes on several fronts. It’s difficult to accurately assess the scale of the problem, Hutchins said, because most of the data on bird deaths are private. They generally are collected by operators of wind farms, and unless they involve public land or are part of a legal case, they generally are not accessible.

Only Hawaii requires that bird deaths be tallied by a third party and made available to the public, according to Hutchins. He would like to see that standard adopted nationwide.

The Conservancy also is advocating changes in wind farm siting and in mitigation for bird deaths and loss of habitat. The group has created a risk assessment map that identifies and rates important bird habitats across the country. Hutchins estimates that about 8 to 9 percent of the country would rank as the most critical habitat, meaning it would be “completely exempt” from wind-turbine installation.

He said that classification would apply to land along the southern coasts of the Great Lakes, for example, because large numbers of migrants pass through that area to reach their summer destinations in the Canadian boreal forest.

A much larger portion of the country may be acceptable for wind farms, Hutchins said, provided that sites were carefully chosen with regard to the needs of birds, although an exact percentage is unavailable.

More research is needed to determine what mitigation strategies might be effective in minimizing bird deaths and replacing lost habitat, Hutchins said. There are indications that turning off turbines at times when lots of birds are around may minimize deaths, Hutchins said. And although lights tend to attract birds, he said that blinking lights may pose less of a problem. The same holds for eliminating or reducing other bird attractors, such as water and vegetation, from the area under and around turbines and power lines.

Hutchins would like the industry as well as the government to fund such research, especially considering the projected growth in wind energy.

“We are not anti-wind energy development,” said Hutchins. “We just hope it can be done right to protect ecologically important birds and bats.”