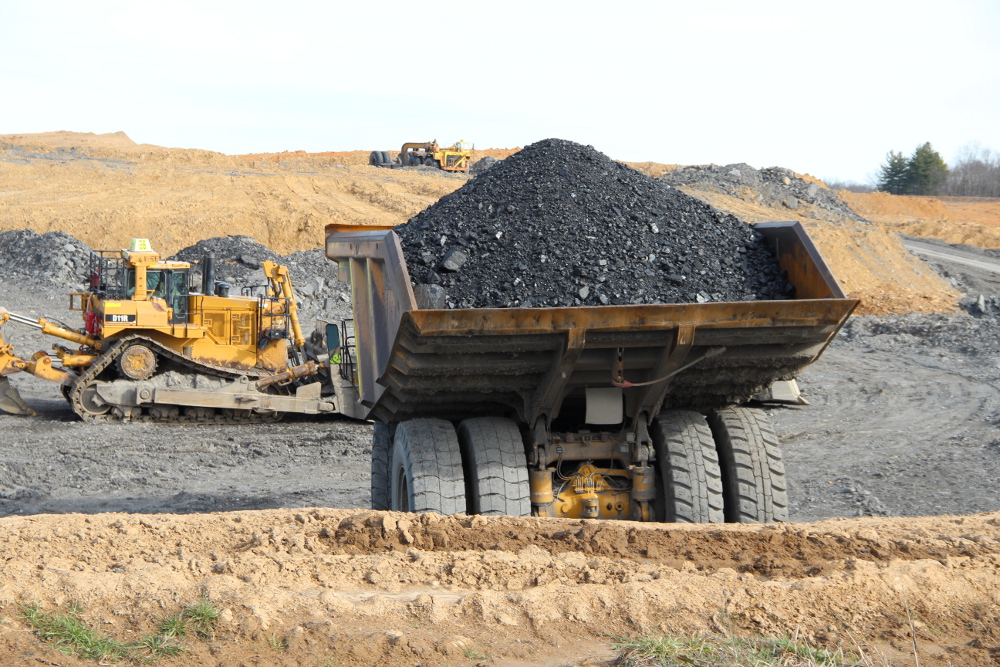 CHRISTOPHER, ILL. — Sitting in Larry’s Pit Barbecue restaurant in the heart of southern Illinois coal country, Tom Vaughn’s demeanor was friendly and cheerful but his message was glum. A retired high school English teacher who seems to know everyone in the joint, Vaughn is a member of the Franklin County Board.

As such, his responsibilities include trying to bolster the economic fortunes of the county and its residents. But that’s a difficult task these days, as most industry has left and the coal mining that was once the bedrock of the region’s economy has hemorrhaged jobs.

“We’re in a budget crisis, we’re hurting for money,” Vaughn said. “Mining is what we’ve always had here. There used to be three shifts a day and the union had the wages where they should be, they were making three times what I made as a school teacher.”

Now only about 3,300 people work in coal mining in Illinois, down from about 10,000 jobs in the mid-1980s and almost 50,000 during the 1930s. New technology including the advent of longwall mining has meant fewer workers needed to mine. But Illinois coal production has been rising, minus a dip last year, and is expected to continue despite the coal industry’s overall crisis.

So Vaughn and some other local leaders, budget analysts and industry watchdogs say it is the perfect time for Illinois to adopt a severance tax on coal mined in the state, so the industry does more to benefit communities even if the jobs are not what they used to be.

Illinois, Texas and Pennsylvania are the only three of the nation’s 25 coal-producing states that lack a severance tax. As the state is in a desperate budget crisis, a severance tax in line with other states’ models could raise more than $60 million per year and up to $5 billion by 2040, according to an October study by the Chicago-based Center for Tax and Budget Accountability and the West Virginia-based environmental consulting firm Downstream Strategies.

A coalition of downstate community, civic and environmental leaders called the Community Futures Initiative is pushing for a coal severance tax of 5 percent, with a third of the revenue going to mining communities, a third to the state and a third to create a permanent mineral trust fund that would continue to disburse interest even after mines close.

Leaders of the initiative have been meeting with residents, lawmakers, county boards and miners around coal country and hope to see legislation introduced in 2017.

Phillip Gonet, president of the Illinois Coal Association, said the industry is firmly against a severance tax. He said it would hurt Illinois coal especially in competition with Indiana, which has a lower severance tax than has been proposed in Illinois.

“Our coal companies are in a very competitive marketplace and any increase in cost is going to make our companies less competitive,” Gonet said. “The current coal market is very challenging, spot prices are down, U.S. coal production is shrinking and an Illinois severance tax is going to threaten the viability of the production of coal. It could lead to more mine closures and the loss of high-paying jobs.”

In other states, economic studies have shown little impact on production from severance taxes, since the price of and demand for coal, the cost of wages and transportation and other factors typically play a bigger role in companies’ decisions.

Pam Richart was deeply involved in the fight to close Chicago’s coal-fired power plants and has since turned her attention to downstate mining issues as a member of the Community Futures Initiative. She thinks that possible mine closures or layoffs in the future – given the state of the industry – provide even more reason to implement a severance tax.

She points to the “boom and bust” mining cycle that leaves towns economically bereft when mines close or make layoffs. Revenue from a severance tax could help them invest in other forms of economic development to diversify their economies, she noted.

“We should have done this a long time ago,” said Richart, also co-founder of the Eco-Justice Collaborative. “We do realize there are job impacts, yes, but it would be a wasted opportunity not to think about finding ways to make that transition that everybody knows is going to happen, with a legacy for people left behind. What we are proposing is really focusing efforts on things like workforce training, infrastructure, economic diversification, health, education.”

A “severance tax” typically describes minerals, timber or other resources “severed” from the earth; it is sometimes also called on excise tax or mining tax. Wyoming, West Virginia, Kentucky, Montana, Indiana, North Dakota and Ohio are among the states with severance taxes that include coal, though natural gas and oil generally make up the bulk of the revenue they collect.

“Uses for the revenues include covering costs associated with resource extraction such as constructing, maintaining, and/or repairing roads; environmental protection and cleanup; or even paying off unpaid workers’ compensation claims,” the Center for Tax and Budget Accountability report notes. “As such, the tax ensures that these costs are paid by the producers rather than taxpayers.”

The funds can also be used for general budget purposes, including to help meet Illinois’ $111 billion unfunded pension liability or fund social services and programs that would otherwise be cut. The Community Futures Initiative proposes that a third of the revenue go to the state, but that it be directed at economic development in local communities.

The U.S. Energy Information Administration has predicted that coal production in Illinois will increase from 48 million tons annually in 2012 to 77.2 million tons by 2040, and that average coal prices will rise from $53 to $67 per ton in that time. Using severance rates typical in other states, the Center for Tax and Budget Accountability estimates that a coal severance tax in Illinois could generate $59.9 million to $173.5 million in 2020, and $77.2 million to $258.2 million in 2040 – for a total of anywhere from $1.8 to $5.4 billion total by 2040.

The center estimates that the trust fund alone could earn $1.2 billion in interest by 2040, and the principal could continue to grow in perpetuity. Montana, Alaska, New Mexico, Utah and Wyoming have permanent mineral trust funds from oil, gas and/or coal revenue.

The center recommends a severance tax of 5 percent of the “gross production value” of coal, which accounts for both the price of coal and the volume produced. A severance tax can also be levied as a dollar amount per volume of coal produced, for example $1 per ton, but that means revenue will likely decline over time as mines are tapped out, even if prices rise.

Since only 15 percent of Illinois coal is used for in-state electricity generation (as of 2012 Energy Information Administration figures), a severance tax would basically not be passed on to Illinois residents in the form of higher electricity prices. Proponents of an Illinois tax note that residents are essentially already paying severance taxes to Wyoming, through their electricity rates, since most Illinois power plants burn Wyoming coal for its low sulfur content.

State legislators proposed a coal severance tax in 1984, and it fell one vote short of passing in the state House. Former Governor Pat Quinn’s administration also considered a tax as a way to fund the Illinois Department of Natural Resources.

The Center for Tax and Budget Accountability and Downstream Strategies have been proposing a coal severance tax and mineral trust fund in Illinois since at least 2013, when the groups did a report analyzing the impact of coal on the state’s budget.
Then, they found that coal presented a $19.8 billion net cost to the state, once corporate income tax and other tax revenues and other economic benefits from coal were offset by state expenditures on the industry.

The expenditures measured included grants, tax incentives (foregone revenue), the efforts of regulatory agencies, and coal-related research at state universities and community colleges. A severance tax would make sure coal does not have a net negative economic effect on Illinois, proponents argue, while also helping bolster the state’s future.

Richart said some state legislators have been supportive of the tax idea behind closed doors, though it’s unlikely to find any public backing during an election. Gonet, however, doesn’t expect a severance tax to pass any time soon.