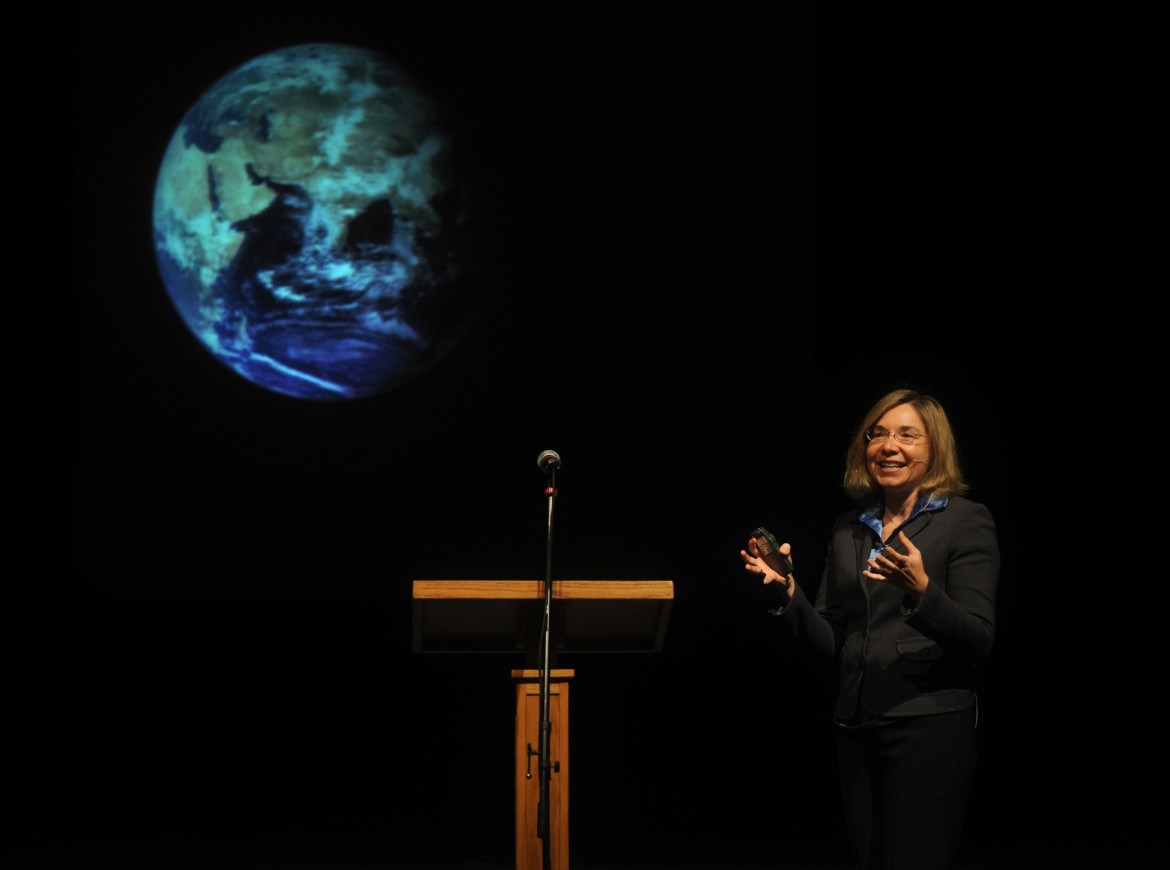 Growing up in Canada, Katharine Hayhoe never knew climate change was controversial. It was not until she enrolled as a graduate student at the University of Illinois’ Urbana-Champaign campus that she encountered doubters—who, in America, turned out to be the bulk of her fellow evangelical Christians.

Today, the director of Texas Tech University’s Climate Science Center spends a lot of time trying to convince conservative Christians that climate change is real, human-influenced and a global crisis—and that it is their duty as members of the faith to act.

Hayhoe’s work as a public speaker, author and researcher has garnered Hayhoe wide public notice, including a spot on Time magazine’s 2014 list of 100 most influential people.

Hayhoe will deliver two talks at the University of Minnesota’s St. Paul campus next week: “Can We Change People’s Minds on Climate Change?” on April 20 at noon and “Climate Change: Facts, Fictions and Christian Faith.” on April 21 at 7 .m.

She spoke with Midwest Energy News in advance of her trip.

Midwest Energy News: In a recent TED Talk, you presented your argument to a Texas audience by posing a question: “What if climate change is real?” Does the soft sell tend to resonate better with southern conservatives?

Hayhoe: It does. The biggest thing I think that I have learned is that we have to start with where people are at.

Interestingly, objections to climate change are often couched in scientific terms—oh, it isn’t real, or it’s just a natural cycle. Sometimes they are couched in religious terms—this couldn’t be happening because God is in control. But when we talk about this in an honest and transparent way, what really lies below those objections is that climate change suggests big-government political solutions that people are not comfortable with, and that actually run counter to their identities.

The psychologist William James once said that even people who adhere to hard scientific facts are, at root, motivated by what he calls “passional” factors. All beliefs, then, are rooted in emotion. Do you find that is the case?

Oh, for all of us, yes. I am firmly convinced—and this is a strange thing for a climate scientist to say—that facts are not enough.

What it really comes down to is that, as humans, we make decisions based on what we have in our hearts. That is why I feel that so much of what I am doing is trying to connect all of these facts and information about climate change to what is already in our hearts.

Demographically speaking, as an evangelical, chances are that you are a political conservative. Is that true? If so, does it help put your message across to other conservatives?

I think your question is right on. We can’t really genuinely bond over shared values, and then connect the values we share to climate change, if we don’t understand those values.

So the answer is yes?

Well, yes. I am Canadian, though, and Canadian conservatives are a little bit different than American conservatives. I am someone who thinks that being conservative is a smart thing to do—that conserving our resources and caring for God’s creation is important.

I am often, but not always, able to connect over issues like that. What works is building a relationship based on shared values.

You participated in a Great Lakes climate change assessment in 2003 during which you determined that the science community lacked high-resolution climate change projections. Was that a pivotal moment?

It completely altered my research trajectory. What shocked me, being part of that team, was the realization that scientists, whether they’re studying ecology, infrastructure, agriculture, water, tourism, energy or health, were all using climate projections that were decades out of date and extremely broad scale.

That study opened my eyes to the fact that there was this huge area of research that was badly needed and immediately relevant to decision making at the local level, to help people build resilience and plan for a changing climate.

‘What it really comes down to is that, as humans, we make decisions based on what we have in our hearts.’

When you look at very specific impacts—for example Minneapolis versus Chicago, or the Great Lakes versus the Finger Lakes—often we see very different climate trends. Climate is impacted both by local factors and global change. So the more we can zoom in on the region we are interested in, the most accurate information we can get.

For instance, we did one of the first city-level climate change impact assessments for Chicago several years ago. One of the impacts we highlighted was that heavy precipitation events are increasing, and the city of Chicago is very concerned because of combined sewer overflows and because of the direction of the Chicago River’s flow.

Ironically, a few years later, Farmer’s Insurance sued the city of Chicago and Cook County because they said they were failing to adequately prepare for the impacts of the changing climate—and Farmer’s had to pick up the tab.

Evangelical political leaders like Rep. John Shimkus (R-Ill.) assert that God promised Noah after the flood he would never hurt the planet again. Ergo, God will fix climate change. How hard is it to counteract that kind of rhetoric?

What determines people’s opinions on climate change is where they fall on the political spectrum, number one; and what the people who they personally view as thought leaders are saying, number two. Often those intersect.

There are a number of what I view as smoke screens or myths people use that sound scientific—or that sound very Christian. But they are not the real reason why we have a problem with the idea of climate change.

One of my favorite, and possibly the most revealing quote from a politician who often uses his faith to deny climate change, came from Sen. Jim Inhofe (R-OK) when he was talking to Rachel Maddow in 2012. He said: “I was actually on your side of this issue when I was chairing that committee and I first heard about this. I thought it must be true—until I found out what it cost.”

That is a very honest statement for why a conservative Republican politician does not want to address climate change. Most politicians—not all, but most—know the truth. They are using smoke screens.

The Midwest is home to a lot of evangelical megachurches. Have you spoken to them?

I have not. Many churches are in a difficult situation because today Christianity somehow has become polarized along the political spectrum.

Many of the conversations that I have had are behind the scenes with pastors or Christian leaders of para-church organizations. Usually, their perspective is, we have a lot of issues to worry about—climate change may be one of them but it is so polarizing that if we take a public stand on it, we may lose half of our funding base. Or a third of our congregation.

That is what makes it even more admirable that the National Association of Evangelicals took a public stand on climate change in October. They adopted a formal position stating that as Christians we care about climate change, because it disproportionately affects the poor.

There are definitely other exceptions to the general rule. Bethel Evangelical Lutheran in Minnesota has a community solar garden. Interfaith Power and Light in San Francisco has Faith and Climate week where they have sermons and resources that they make available to churches and congregations all across the country. There are absolutely individual churches that are moving ahead.

Were you ever a climate change doubter?

As a Canadian evangelical, doubting the science wasn’t even on our radar. Climate change wasn’t really an urgent issue in the church, but it definitely wasn’t an issue that people had a problem with.

It wasn’t until I moved to the states that I became aware that there were people who didn’t believe that climate change was real—and that many of those were Christians. I was so naive and unaware of the tension at that time that my husband and I we were married for six months before we figured out we were on opposite sides of the fence!

Really? You and your husband (linguist and pastor Andrew Farley) co-authored “A Climate for Change: Global Warming Facts for Faith-Based Decisions.”  Yet he once was a denier?

Do you take credit for changing his mind?

Not entirely. It was a journey together. We were able to have honest, genuine conversations and we looked for answers together. I give him credit for helping me change my mind about where people are coming from when they don’t think it is real. Ultimately, he changed his mind because climate change is real.

As my husband says, a thermometer isn’t Democrat or Republican—the number it gives you is not going to change depending on where you are in the political spectrum. So, to me, the idea that climate change is so politically charged is a huge problem.

The question I spend a lot of my time working on is how can we connect climate change to the values people already have, and move it beyond political polarization so that everyone agrees it’s real. Let’s argue about the solutions.