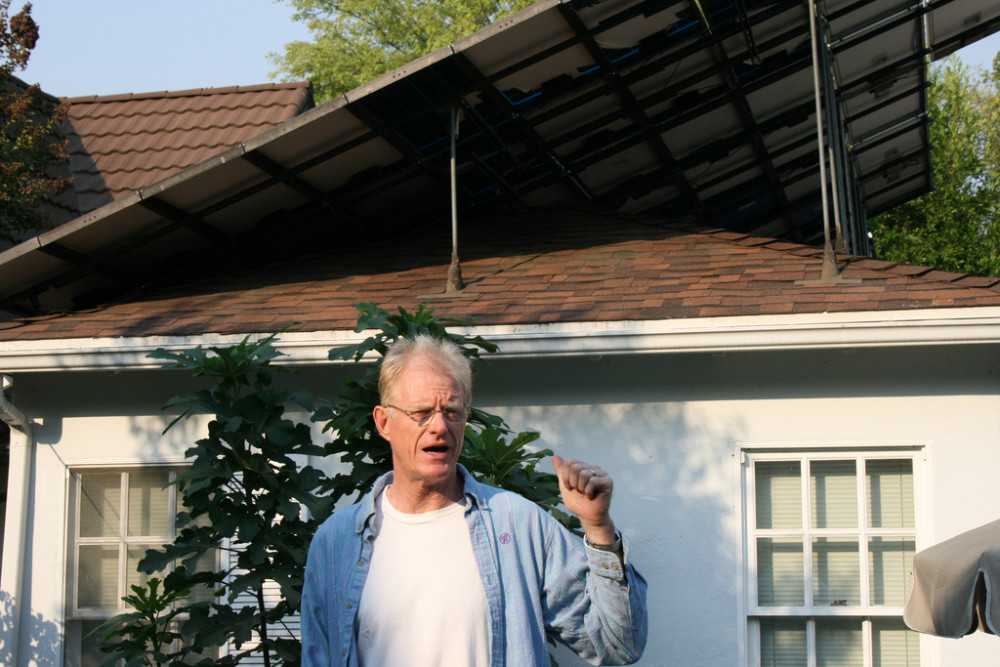 Actor and environmentalist Ed Begley Jr. at his Los Angeles home in 2009.

MILWAUKEE – Ed Begley Jr. has a message for Wisconsin.

The actor and longtime environmental advocate told Midwest Energy News that if you can turn Hollywood green, despite being “a bastion of waste and excess with big parties and limousines,” then you can do clean energy in Wisconsin despite the hostile political climate and Midwestern weather.

Begley was a featured speaker at the 13th annual Sustainability Summit in Milwaukee last week, where civic leaders described the city’s efforts promoting solar power, energy efficiency and microgrids along with urban gardens, recycling and other environmental campaigns.

Begley joined the nascent environmental movement in the early 1970s in Southern California, outraged by smog in the air and raw sewage in the ocean. He was among a group of entertainment industry players pushing for environmental responsibility in film and TV production.

By the 1990s environmentalism was embraced by those sectors, Begley noted, with most productions now having a “green plan” covering their lighting, transportation and other practices. The Environmental Media Association, an entertainment industry group, promotes such practices and gives annual awards.

Begley is building a 3,800-square-foot, LEED platinum-certified, carbon neutral home. While acknowledging most people can’t afford that kind of investment, he urged Midwesterners to start small and then continue building their environmental commitments.

“In 1970 I didn’t go broke installing solar panels I couldn’t afford,” he said. “You do the cheap and easy stuff first, get a home energy audit, then maybe move up the ladder and do more. Start to think about all the low-hanging fruit you can pick – efficient light bulbs, efficient thermostats, weather-stripping, bike riding when weather and fitness permit.”

While Begley lives in the nation’s mecca for rooftop solar, he noted that Wisconsin has some advantages over Western states.

“People think solar is great for Southern California, New Mexico and Arizona, but it turns out the sun also shines in the fair state of Wisconsin,” he told Midwest Energy News, noting that his solar system was made by a Michigan company. “And guess what, a solar panel is more efficient when it’s cooler, not in the hot sun. The Midwest has plenty of nice days that are cold and not cloudy.”

Such advice has already been widely embraced in Milwaukee, which has a vibrant city-sponsored solar energy program, a robust building energy benchmarking initiative, a manufacturing efficiency program, a PACE financing sector and other efforts that have been underway since at least 2004, when the mayor’s office created a “Green Team.”

But state and utility policies have made such efforts more difficult in recent years. Erick Shambarger, chair of the city’s Environmental Collaboration Office, noted that We Energies rate cases have affected solar development in the area, legislators have pushed to cut the Focus on Energy efficiency program, and the state is challenging the federal Clean Power Plan, rather than initiating carbon reduction compliance efforts.

“It’s disappointing,” Shambarger said. “That presented an opportunity for Wisconsin businesses…In the city of Milwaukee, we’re particularly interested in the clean energy incentive plan that the Clean Power Plan offers. There could be incentives for energy efficiency in low-income communities.”

Policies proposed by We Energies and approved by the state Public Service Commission have made the financial conditions much less favorable for rooftop solar in the service territory that includes Milwaukee.

“We don’t have as much of an open market for different companies to come in and provide solar,” said Shambarger. “That’s been a challenge.”

But he said interest in solar energy and the city’s Milwaukee Shines program for group buys and other solar promotions has remained surprisingly high.

“We expected to see the recent changes in net metering discourage more people from doing solar, but we were surprised to see strong interest in the last round we did even after the changes went through,” he said. “We had 26 homeowners participate in it.”

He noted that We Energies is partnering with the University of Wisconsin-Madison and the Mid-West Energy Research Consortium in developing a microgrid in Milwaukee’s Century City Business Park. He hopes the utility sees it as a model for its own operations in the future.

Mark Felsheim, chair of the sustainability summit, said that funding cuts and budget crises on the state and local levels have also been hard for clean energy initiatives, but there may be a silver lining.

“Resources are a challenge for everybody, which is what also may be pushing the drive to work together more, there’s more synergy and collaboration, rather than everybody being in their silos,” he said. “The city isn’t rolling in dough, the city is challenged, the county is challenged, the public colleges and universities have had cutbacks and even the private colleges are seeing drops in enrollment and donations… What we’re talking about here, despite the political climate, is that we can continue to move forward and the synergies are there.”

Shambarger noted that even as heavy industry has left the Rust Belt, there is still much manufacturing in Milwaukee, making it well-suited for both clean energy-related manufacturing and for improvements in energy efficiency that can lower energy costs for factories. The city’s ME3 program provides audits and energy efficiency assistance for manufacturers, including the family-owned sand foundry Badger Alloys and R.B. Wagner metal fabricators.

“They hone in, identify particular opportunities for efficiency, do more in-depth assessments, look at the return on investment,” Shambarger said. “It gives small and medium-size manufacturers good information on how to make their facilities more efficient. The big ones have that already but small- and medium-sized ones might not, it’s a lot of added value for them.”

Gov. Scott Walker has pledged a commitment to creating jobs, at the same time his administration has cut programs promoting renewable energy and energy efficiency. Shambarger said that especially for Wisconsin and Milwaukee, federal and state programs that promote efficiency and demand carbon reductions bolster manufacturing and jobs.

“There are states like Kentucky or Wyoming that are big coal states – those states export coal, and I can understand why they would not be interested in reducing carbon emissions,” he said. “But what we export is energy efficiency products –  companies like Johnson Controls – so it makes perfect sense for us to be embracing policies that are good for the environment.”

Milwaukee Mayor Tom Barrett, who unsuccessfully ran against Walker in the gubernatorial recall election in 2012, has been a major backer of environmental efforts, Shambarger said.

“Mayor Barrett has set the tone – his firm belief is that you don’t need to choose between the economy and the environment, you can structure programs that are good for both. Sometimes in the rest of the state that message hasn’t sunk in. They still look at environmental issues as a nuisance moreso than a potential benefit.”