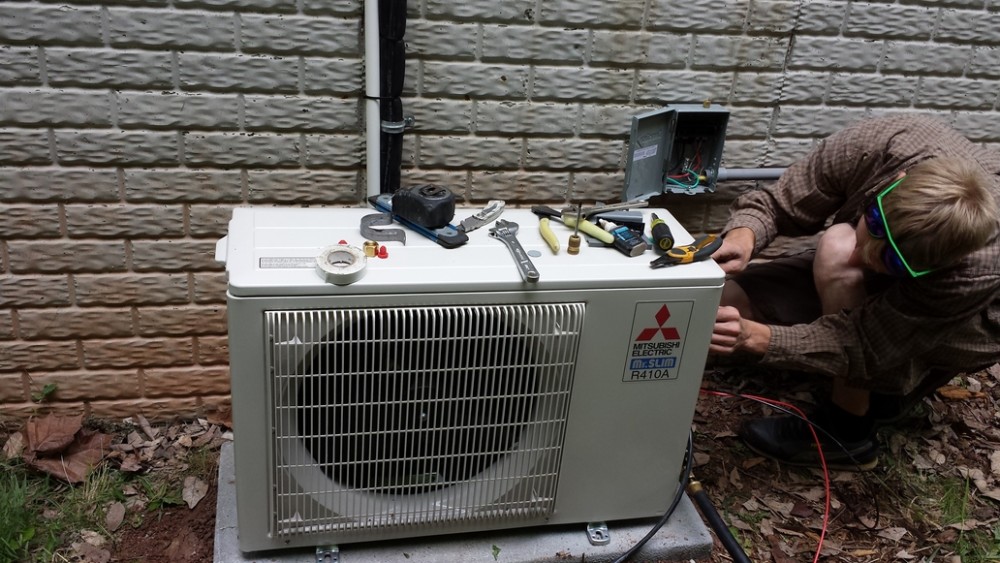 A worker installs a heat pump to improve energy efficiency at an Athens, Ohio rental property.

A new program to increase energy efficiency for rental properties in Athens County, Ohio, is part of a broader effort to deal with practical and political obstacles to clean energy.

Typically, tenants are the ones who would reap the benefits of energy efficiency investments, but landlords are stuck with the bill.

To get over that hump, Empower Gas & Electric’s Athens office is helping owners of energy efficient rental properties market them to tenants – many of whom are Ohio University students – who want to save money and reduce their carbon footprint. The approach could produce significant savings renters while giving landlords who make efficiency investments a competitive edge.

The project and other programs promoted by UpGrade Athens County could also help the area win the Georgetown University Energy Prize. Athens County is one of 50 communities across the country competing for the $5 million prize.

In addition to helping people and businesses save money through energy efficiency, the prize would provide “an opportunity to build long-lasting jobs around clean energy in this county,” said Mathew Roberts at UpGrade Athens County. Benefits could extend beyond the immediate region as well.

“Athens is such a hub of innovation,” Roberts continued. “If we can start it here, we can really work to develop a model that will be best for Southeast Ohio in general.”

The economics of rental properties often present a dilemma for energy efficiency projects. In most cases, renters who would get the direct benefit of savings on their energy bills have little means and even less incentive to spend substantial amounts to improve properties they don’t own.

That’s certainly true in Athens County, which has thousands of university students who don’t plan to settle permanently in the area, said Carol Davey-Sayre at Empower Gas & Electric, which is based in Columbus.

Davey-Sayre and others developed the new rental property marketing approach for the Empower Athens energy efficiency programs offered by the company as a contractor for electric services aggregator SOPEC, the Southeast Ohio Public Energy Council.

As she sees it, the key to getting landlords on board is to stress other benefits they can reap from energy efficiency investments, including an increase in property value, improved marketability and lower turnover.

“We market our products to landlords in a way that makes it lucrative to both them and the tenants,” Davey-Sayre said.

“So tenants can rent those properties knowing that they’re saving more money on their utilities,” Davey-Sayre said.

Knowing what to expect in advance cuts down on tenant turnover that can result after renters suffer sticker shock from high energy bills, she noted.

Depending on the improvements made, energy efficiency projects can also boost a property’s value by 6 to 8 percent, Davey-Sayre explained. Higher-value properties can compete better in the rental market in the short term and command a better resale price in the long term.

Landlords can also save on the costs for energy efficiency improvements with rebates from SOPEC and multi-property discounts from Empower, Davey-Sayre added.

For now, the Athens County project is focusing on houses with a limited number of renters instead of large apartment complexes with dozens of units.

Owners of those larger properties are less likely to sign on “unless they feel pressure to act because other landlords are participating in this green rental market,” Roberts said. He hopes that competitive pressure will eventually get those other landlords to join in.

The Athens County marketing model isn’t the only way to deal with the perceived split between landlords and tenants’ interests in energy efficiency.

“We are also piloting an on-bill financing option for the city of Cincinnati,” Davey-Sayre said. That approach calls for all the tenants in a building to agree to keep or switch to the company as their electricity supplier.

Once energy efficiency improvements are made, tenants would pay a share of those costs through a charge on each month’s bill. That charge, however, could not go over whatever the tenants would be saving in energy costs from the financed improvements.

Landlords would get the increased property value. “And the tenants would enjoy the greater comfort and reliability and savings,” Davey-Sayre noted.

“As the tenant moves out, the new tenant for that property would take over the payments,” she added.

“It ends up being really a win-win for everyone, and it helps develop a green energy market,” Roberts said.

As he sees it, that’s critical for Appalachian Ohio, where Athens County is.

”It’s important to move this region out of a boom and bust cycle of economic development, especially around energy, and into a more sustainable development model where we’re training people for the future,” Roberts stressed.

In his view, that task would be much easier “if the state just supported clean energy.”

As a result, project payback periods are longer. And Senate Bill 320, introduced last month, would weaken the clean energy standards further and then extend that freeze another three years.

“It makes it really difficult for investors to want to build here because the policy is not favorable,” Roberts said.

In the meantime, UpGrade Athens County will keep working with Empower Athens and other partners “to really come together and find ways to go around these policy obstacles,” Roberts said.

“We have to figure out ways to do what we think is right.”