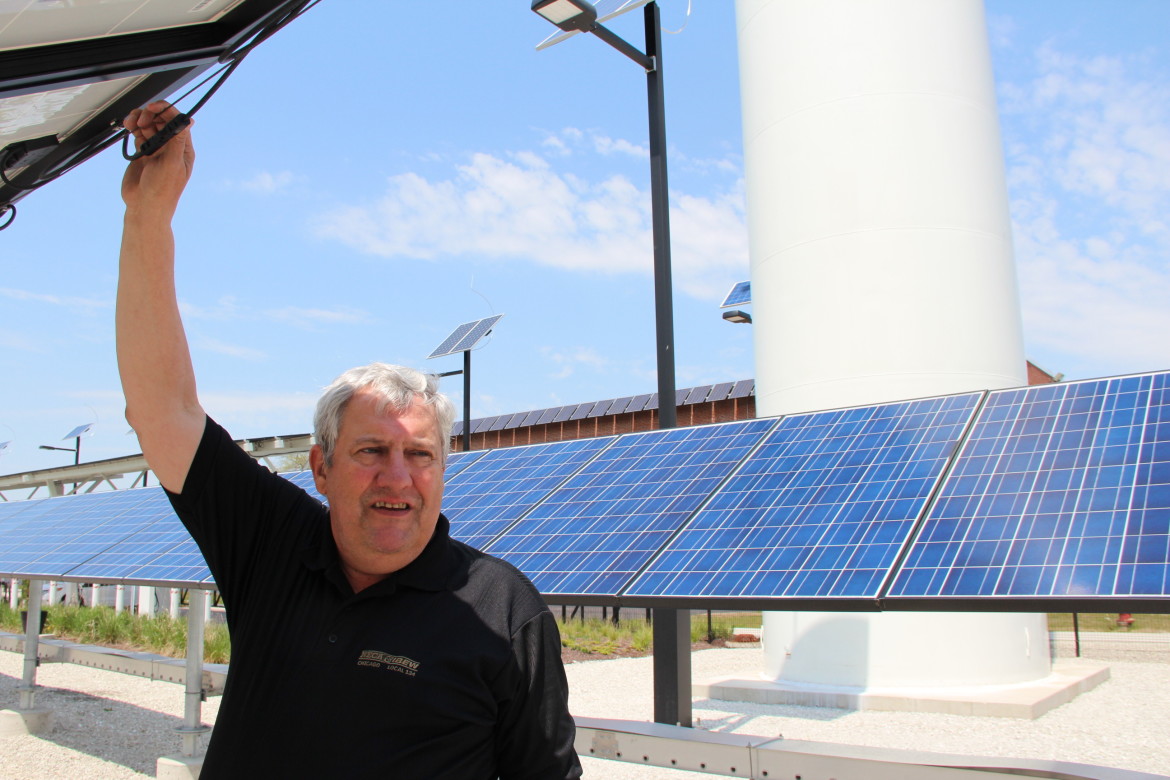 ALSIP, Illinois — “We take them down and then we get our hands on them and put them up again,” said electrician master trainer Harry Ohde, gesturing at the 54-kilowatt (kW) array of ground-mounted solar panels glistening blue in the sunshine.

Some of the panels were missing, stripped down to the ground mounting. Soon, students at the IBEW-NECA technical training institute in the south Chicago suburb of Alsip would be reassembling them. “It’s all hands-on training.”

Next to this solar array is an 18-kW solar carport, with panels on the roof that power electric vehicle charging stations below. There’s also a 3-kW dual axis solar array that moves throughout the day to track the sun. And there’s a 5-kW Bergey wind turbine, with a bright yellow nose and tail.

“That’s a wild 3-phase AC,” noted Ohde, who has 32 years experience in the field. “Somehow we have to tame that baby,” transforming the alternating current (AC) into direct current (DC) and then back into AC again.

There’s a 10-kW roof-mounted solar array. There’s also a 60-foot-tall cylindrical white tower with ladders inside, where students can practice climbing the inside of a wind turbine. And then there’s the sleek, angular white training building filled with inverters and lithium ion and lead acid batteries and other renewable energy components, including ones aimed at the state’s burgeoning smart grid. The solar energy onsite powers much of the training institute, including the energy-hungry welding lab.

This school has been around for a century, as a joint venture between the International Brotherhood of Electrical Workers (IBEW) Local 134, the labor union that represents about 15,000 electricians in the Chicago area, and the National Electric Contractors Association (NECA), comprising those who employ them. For generations, journeymen and apprentice electricians have learned and honed their trade here.

The NECA and IBEW have worked together to wire significant structures throughout Chicago’s history, according to the groups, including the city’s first telephone system and first subway system, the Willis (formerly Sears) Tower, Wrigley Field, O’Hare Field, the John Hancock Building and more recently, Trump Tower. IBEW members did all the welding on Exelon’s 10-MW City Solar farm on the far South Side of Chicago.

Up until about three years ago, the clean energy component at the school was limited to a modest solar PV array clinging to the south side of one of the training buildings, Ohde noted.

But now students at the Renewable Energy Training Field can practice on a wide range of clean energy tasks, from installing solar arrays and EV charging stations to grounding solar arrays and solar-powered street lights against lightning strikes to climbing and wiring wind turbines.

All the components on-site are made in the U.S., Ohde noted, including solar panels from Nashville, carport structures from Cincinnati, the solar streetlights from Ft. Lauderdale and metal beams from Allied Tube & Conduit nearby in Harvey, Illinois.

Electricians are essential to launching solar and wind energy and energy storage technologies. As the clean energy sector continues to grow, many jobs are likely to be created in installing and maintaining solar arrays, wind turbines, inverters, batteries, electric vehicle chargers and the like.

And there are still relatively few people in Illinois with advanced certifications and experience in the field, experts say. The main organizations certifying renewable energy technicians are the North American Board of Certified Energy Practitioners (NABCEP) and Interstate Renewable Energy Council; the training center has relationships with both.

Ohde has been interested in renewable energy since he was a “long-haired hippie in the 1970s.” And he laments that policy, economics and politics chilled the potential that clean energy held even back then. But now he is gratified to see the sector burgeoning.

The Clean Jobs Bill proposed by a coalition of renewable businesses and environmental and consumer groups would increase the state’s Renewable Portfolio Standard from 25 to 35 percent renewable energy by 2030, and backers say it would create 32,000 clean energy jobs per year. Ohde participated in a solar lobby day in the state capitol May 4, the day before the utility ComEd and generator Exelon announced a proposed bill that they described as jump-starting solar, though solar companies and environmental groups say it could have the opposite effect.

Ohde hopes to see solar installations sprouting on brownfields of the type that profilerate in the post-industrial stretches of metropolitan Chicago, including around the training center.

“There are tons of places in Chicago where the soil is contaminated and it would cost too much to really clean it up, so let’s put solar on it,” he said.

The facility is also ready to train people in emerging technologies, including flywheel energy storage, fuel cells and wireless energy transfer to EV charging stations. Ohde pointed out an electrical port in the carport that is ready to be used for vehicle to grid (V2G) technology when it becomes more established.

“I think it’s all about storage,” Ohde said.

Ohde argues that solar energy and technology should become a core part of school curricula starting in middle school and high school. To this end, the training institute has partnered with the Illinois Clean Energy Foundation and the National Energy Education Development Project (NEED) to train Illinois teachers in understanding and even installing solar energy, so they can pass on the knowledge to their students.

“If you expose them at an early age, it sticks,” said Ohde. He is reviewing a letter written by area high school students hoping to convince their school board to install solar panels.

“Install solar, because it’s cool!” Ohde said. “If you talk about the sun, it makes you feel nice and warm and fuzzy.”