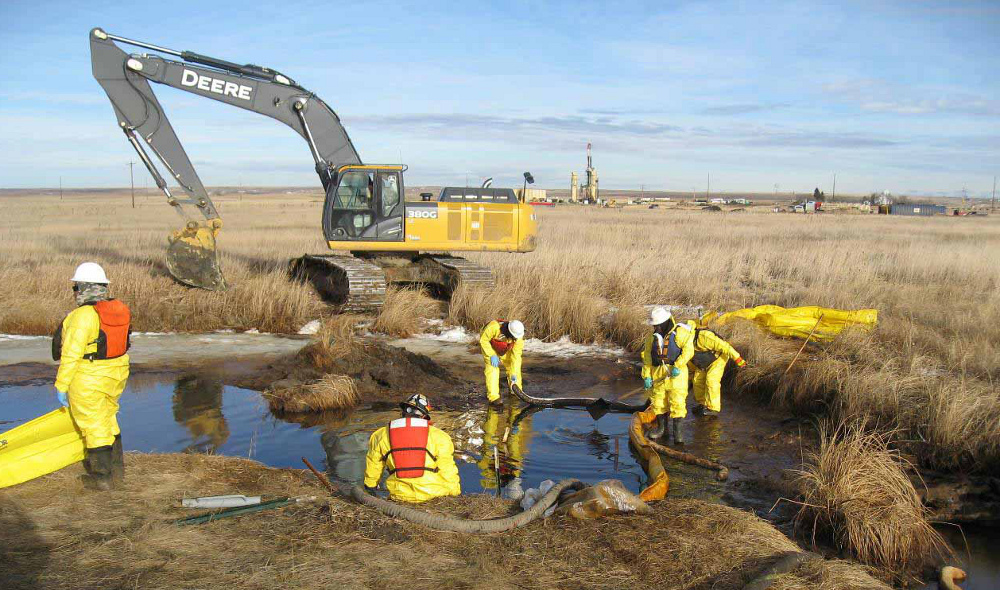 Workers clean up a spill of oil field waste on Blacktail Creek outside Williston, N.D., in 2015. More than 3 million gallons of wastewater escaped from a broken pipeline, prompting the state Legislature to pass a pipeline safety law.

An oil company’s pipeline had started leaking on his farmland outside Ambrose, North Dakota. It turned out the leak had been going on for days or weeks, spilling an estimated 4,260 barrels — 178,900 gallons — of salty wastewater. Nine months later, Benter is left to wonder how the leak happened and whether the salt will permanently sterilize part of the land.

“That pipeline wasn’t even 2 years old,” Benter said. “They’ve got to do a better job of putting these pipelines in.”

By the end of the summer, Benter and other landowners will know how strictly the state plans to regulate pipeline construction in an effort to prevent similar leaks and spills.

The North Dakota Industrial Commission is preparing to finalize a package of rules that could impose construction and safety requirements on the largely unregulated network of gathering pipelines that connect to individual oil wells in the state.

The oil industry opposes most of the changes, saying they’re too expensive and come at a time when the global crash in oil prices has caused a steep decline in drilling in North Dakota. Environmentalists and landowner groups are pushing for tougher restrictions, saying the state should do more to prevent pipeline accidents like the one on Benter’s land.

North Dakota became the second-biggest oil-producing state in the last 10 years after the fracking boom opened up the Bakken Shale field, a layer of rock that lies beneath much of the western half of the state. The boom helped reverse the population drain in North Dakota, but it also led to environmental problems and other side effects.

North Dakota already has tens of thousands of miles of gathering pipelines, and state officials expect another 36,000 to be built as the Bakken Shale matures. In North Dakota, the lines are used not only for oil and gas but also for the wastewater, sometimes known as brine or produced water.

Unlike long-haul pipelines, gathering lines aren’t subject to federal regulations, and North Dakota has only a few rules in place for them.

Landowners and environmental groups have been pushing the state for tougher regulations since 2013.

In 2015, a gathering pipeline spilled nearly 3 million gallons of brine into Blacktail Creek, a few miles north of Williston. The pipeline had leaked for a little more than three months before it was discovered, and the wastewater flowed downhill into the Little Muddy and Missouri rivers (EnergyWire, Oct. 29, 2015).

The North Dakota Legislature, which was in session as the Blacktail Creek spill was being cleaned up, ordered a $1.5 million pipeline-safety study from North Dakota State University and told the state industrial commission to write new standards for gathering pipelines.

The NDSU study said it wasn’t cost-effective to require automatic shutoff valves and high-tech leak detection systems — something that landowner groups have been pressing for. Instead, the industrial commission will require bonds for gathering pipelines, better planning for spills and leaks, and tougher construction requirements.

Pipelines will also have to undergo pressure testing after they’re built and be designed to allow testing and cleaning with inline instruments known as pigs, according to a draft of the rules. Lines that go through wetlands or other environmentally sensitive areas will have to be bored horizontally.

The commission’s oil and gas staff held a series of hearings about the regulations in April and has received 492 pages of written comments. The commission itself, made up of Gov. Jack Dalrymple (R), Attorney General Wayne Stenehjem (R) and Agriculture Commissioner Doug Goehring (R), will vote on a final version of the rules this summer.

After that, the rules will go to a committee of the state Legislature for final approval. Both the industrial commission and the legislative committee can alter the rules, Allison Ritter, a spokeswoman for the state Department of Mineral Resources, said in an email.

Ron Sylte, who owns the land where the Blacktail Creek spill happened, said the state has a history of lax enforcement against oil companies.

“I think they should have some teeth in the fines and the administration of it,” he said in a phone interview.

“Make it hurt. Make them do it right.”

The state’s major oil producers, though, say the rules would be too costly and question whether the proposed rules go beyond what the Legislature intended.

“We must keep in mind that today’s economics cannot absorb the great costs of increasing regulation without substantial increases in health and safety,” wrote Ron Ness, executive director of the North Dakota Petroleum Council.

The commission expects the cost to be negligible — $523,100 across the whole industry — since many of the requirements are already standard industry practice. It has ample authority to pass the regulations under both the 2015 pipeline safety bill and previous laws, Ritter said.

The Northwest Landowners Association, which represents farmers and ranchers in the oil field, wants parts of the rules tightened. The bond amounts, for instance, aren’t high enough to ensure that companies adequately reclaim drill sites and pipeline rights of way.

“This is an important protection for landowners, especially in the current economic climate with operators becoming insolvent,” wrote Troy Coons, the group’s chairman.

Benter said he hasn’t closely reviewed the regulations but wants to see the state do more inspections to make sure pipelines are installed properly.

The company responsible for the spill, Samson Resources, didn’t provide Benter a lot of details. It wasn’t until Benter flew over the field in his airplane that he realized how far the spill had spread. Samson declined to comment for this story.

The salt water affected about 5 acres of cropland, according to a report from the state Health Department. Crews removed 2,500 barrels of liquid — 105,000 gallons — and replaced the sod and topsoil in the area. During a follow-up visit in March, state inspectors tersely noted, “Additional follow-up will be needed this summer to ensure vegetation growth.”

Benter said he’d like the state to take a long-term view of pipeline problems.

“I own the land, and that land’s going be here when we’re all gone,” he said.