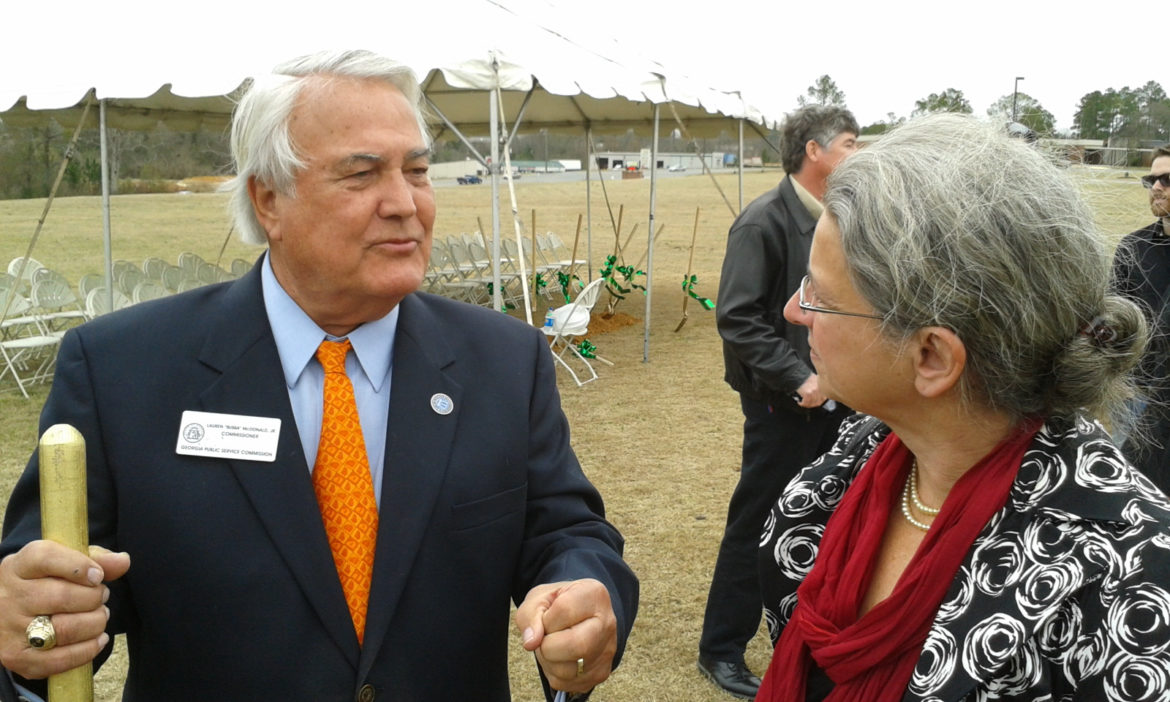 The 77-year-old Republican, now in his third term on Georgia’s Public Service Commission, is a lifelong conservative, a vocal Donald Trump supporter and a critic of the EPA’s Clean Power Plan.

He’s also one of the state’s strongest proponents of solar energy development as part of an overall portfolio mix.

In 2013, he introduced an amendment to Georgia Power’s Renewable Action Plan that allowed for the construction of 525 megawatts (MW) of solar energy through a Purchased Power Agreement. Since that time the Army and Navy have joined with Georgia Power, the state’s largest utility, to build solar arrays on military and naval bases.

In 2014 he won the Individual Achievement Award from The Solar Foundation, a Washington, D.C. based national center for solar energy research and education.

However, he has not been without detractors, who have noted, for instance, that he and commissioner Doug Everett have received donations of more than $14,000 from the solar industry, according to campaign disclosures from the Georgia Government Transparency and Campaign Finance Commission (McDonald points out that the donations came after the PSC’s 2013 decision).

McDonald, along with other commissioners, has also been criticized for accepting meals, lodging and other gifts from utility lobbyists. McDonald told the Atlanta Journal Constitution that the gifts have not persuaded him on policy.

McDonald, also a 20-year state legislator, is a graduate of the University of Georgia with a BBA in Business and has lived his entire life within District Four of the PSC.

Southeast Energy News: How did you become an advocate for solar power?

McDonald: I am very open to improvements in technology that are market driven and clean. When I was first elected, coal was our basic energy. We are in a period of long-term decommissioning of many of our old coal plants. In the past we spent millions of dollars on scrubbers, bagging and other environmental measures to clean the air.

When I was elected I started following developments in solar power in California, New Jersey, Arizona and other states. The technology was skyrocketing and the cost of solar was going down. I did a little project called the Large Scale Solar Program that was 50 MW.

We have made tremendous progress in our state, and although some of it was at the ratepayer’s expense, we are still 15 percent below the national average as far as electric rates are concerned.

You were one of the driving forces behind Georgia’s current adoption of solar. How did you bring that about?

By law, we have an IRP (integrated resource plan) every 3 years. In 2013 when Georgia Power presented the IRP to the public service commission there was not one watt of solar in the IRP. I amended the IRP with the help of two of my commissioners, Doug Everett and Tim Echols, to put in 525 MW of solar power. I called it The Perfect Storm, because the technology for solar had just skyrocketed and the cost of solar had dropped 40 percent. In addition, long term financing rates were very favorable.

There are five commissioners, so that gave us a majority vote of 3-2. Once the amendment passed, we voted unanimously to pass the overall IRP.

Did you have trouble convincing Doug and Tim?

I can’t give away all my secrets! I am very persuasive. We have a lot of good, flat land in the southern part of our state, and we get a lot of sun. According to a 2010 study from the University of Arizona, we are in the top five states in the nation who would benefit most from turning to solar for self-sufficiency.

After the IRP passed, everything broke loose for solar in Georgia. In 2014 Maj. Gen. Al Aycock decided to use Georgia as a model for solar exploration. Georgia Power contracted with the U.S. Army and the U.S. Army Energy Initiatives Task Force to build, own and operate on-base installations with 30 MW at Fort Benning, 30 MW at Fort Stuart and 45 MW at Fort Norton; and then the Navy came forth and decided they wanted 31 MW of solar at their submarine base in Kings Bay and 31 MW in Albany.

Collectively, these large-scale installations are expected to generate more than 160 MW of solar power. The solar arrays will provide energy savings, as well as backup power to keep the base running if there is some kind of cyber-attack on the military or a transmission facility.

We do recognize, however, that solar is not a dependable baseload generator. You can’t depend on it at midnight, for instance. We recognize that.

What is the economic arrangement between the military and Georgia Power?

The military provides the solar energy to Georgia Power on power transmission lines they build. Then they provide the power back to the military. Georgia Power pays the military for what they produce, at what is known as the “avoided cost.” That is the cost of the cheapest energy available at that time, whether it’s nuclear, electric, gas, hybrid.

So Georgia Power still makes a profit when they sell it back to the military.

From the utility company’s perspective, there is a lot of cost to this setup. They have to build it and run it. They need to recoup those expenses. By purchasing at the avoided cost, the cost of the energy is comparable to what it would cost to generate it from other sources.

We’re not going great guns on rooftop yet. That’s a little different. The consumer needs to educate themselves. For instance, an 80-year-old with a 20-year-roof doesn’t need a solar panel on their house. A person with a long-term mortgage needs to make sure they aren’t violating any regulations of their mortgage before they put a panel on their house. So individual solar is a bit different.

You retire in 2020. When you walk out of that commissioner’s office, where would you like Georgia to be in terms of solar power?

To tell the truth, my goals are longer term. My goal is that when my grandchildren, who are 8, 12 and 13, turn 50, they will be enjoying clean, affordable, reliable energy, and they can look back and say, “You know, Poppy had something to do with this.”

Correction: This story has been updated to reflect that McDonald is in his third term as a commissioner, not his second.