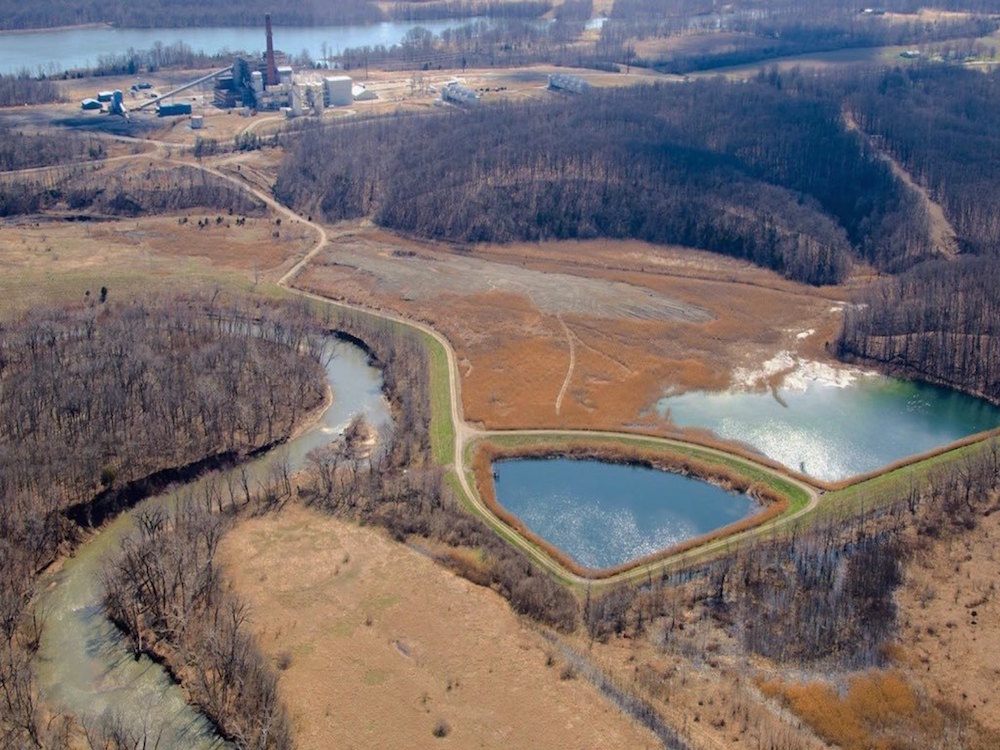 Coal ash storage sites near a former Dynegy coal plant along the Middle Fork of the Vermilion River in Illinois.

The Vermilion Middle Fork is a swift-flowing river winding through lush forests, rolling prairie and craggy cliffs in central Illinois. Designated as one of the country’s “National Scenic Rivers,” it is subject to federal and state protections, popular with paddlers and home to wildlife including 24 endangered or threatened species.

But the river’s banks butt up against three massive pits filled with toxic coal ash produced over five decades by the Vermilion coal-fired power plant, which closed in 2011 and is still owned by the power company Dynegy. The pits hold more than 3.3 million cubic yards of coal ash, enough to fill an Olympic-sized swimming pool more than 1,000 times.

In some spots, dark orange run-off drips into the Vermilion, as documented by canoeing environmental watchdogs who note that such iron-rich runoff is common from coal ash impoundments. The river’s banks also show obvious signs of erosion, and as the soft earth recedes it brings the river closer to the vast reserves of coal ash.

Local residents and environmental advocates fear that the Vermilion could become the site of a disaster akin to those in Kingston, Tennessee or the Dan River in North Carolina, where coal impoundments failed and inundated nearby waterways and towns with toxic sludge.

In October, long-awaited federal rules governing the storage of coal ash took effect. But the rules do not apply to ash stored at power plants that were already closed, hence the impoundments next to the Vermilion River are not covered.

The state is in the process of drafting its own rules on coal ash storage.

The Illinois Environmental Protection Agency (IEPA) started this process several years ago, and after discussions between industry and environmental stakeholders, it came up with a draft that environmental advocates said was decent if not ideal.

But the agency halted that process to see how the federal rules played out. After those rules were finalized, the Illinois Pollution Control Board ordered the IEPA to submit its proposed rules.

This time, the state agency — under the new administration of Gov. Bruce Rauner — submitted proposed rules far less stringent and comprehensive than the previous draft. The proposed rules currently before the board cover six pages, while the earlier draft was around 50 pages.

And as coal plants increasingly close nationwide, they say it is more important than ever to make sure rigorous requirements are in place for coal ash storage.

A public comment period on the proposed state rules closed last week, and the IEPA is supposed to report back to the pollution control board by July 15.

The Environmental Law & Policy Center, the Prairie Rivers Network and the Sierra Club have submitted comments proposing that the state rules basically enshrine provisions of the federal rules, so that the same rules apply to ash at closed and operating power plants and the compliance and enforcement processes are streamlined.

The groups are also proposing three key provisions that they say are lacking in both the federal and state rules: meaningful public input; a mandate to explore alternative plans for permanent coal ash storage; and assurances that companies will have the financial resources to safely store their coal ash and deal with any contamination that results.

“Without the public having the chance to comment, we have waste being stored in communities that have no voice in that process,” said Andrew Rehn, water resources engineer for the Prairie Rivers Network. “And [the state and federal rules] also lack alternatives analysis. … Without this, it seems they can just do a cap and leave it at each site.”

The groups also want the state to essentially take authority to enforce the rules, since the federal rules — like various other environmental laws — are “self-implementing,” meaning there is no proactive government oversight and it is up to citizens or watchdogs to ferret out violations.

Dynegy spokesman Micah Hirschfield said the company — like the environmentalists — wants to see the two sets of rules “harmonized” to “avoid both gaps in the regulations and unnecessary conflicts.”

But in testimony filed before the Illinois Pollution Control Board, Dynegy opposed the environmental groups’ proposal, saying it “is not a thought out harmonization at all, but rather a chunky amalgam embodying the Environmental Groups’ wish list for modifications” to both the state and federal rules.”

Coal ash is being stored at 22 sites in Illinois, according to a map compiled by the Prairie Rivers Network. That includes 16 currently operating sites and six sites where power plants have closed, including Vermilion in eastern Illinois and the Crawford plant in Chicago. Groundwater contamination and levels of metals above legal limits have been found at many of the sites, including Vermilion.

A 2011 report by the Environmental Integrity Project and Prairie Rivers Network found that Illinois has the second-highest number of coal ash sites nationwide.

Coal ash can cause contamination both when metals like arsenic and mercury leach into the groundwater, and when flooding or the failure of the impoundment structure causes ash to spill directly onto nearby land or into waterways.

Liners can help prevent groundwater contamination, but many ash pits are not lined; only one of the three ash pits by the Vermilion has a liner. The federal rules require liners in some situations. When coal ash impoundments are closed, they can be sealed off with a cap of membrane and soil to prevent ash overflowing, but even then the walls holding the impoundment can fail and contamination can still leach into the groundwater.

In many cases, advocates think coal ash should be moved from where it is being stored to safer locations with linings and better impoundment structures, well above the water table. Adding liners or improving the structural integrity of existing coal ash impoundments can be very difficult or impossible unless the coal ash is removed.

“Almost every single one of these coal ash impoundments is going to be on a river or lake — that’s where they were building power plants because they needed the cooling water,” noted Rehn.

Dexter, who filed testimony on the proposed Illinois rule, said the Vermilion site is especially problematic.

“The river is meandering right into those ponds, they just can’t be left there long-term,” she said. “So we need a corrective action and closure procedure that can look at removing that coal ash and putting it on high, dry ground with a liner; not just leaving it to leak into our only ‘scenic river.’”

Dynegy acquired the Vermilion plant in 2000 with its purchase of the Illinois Power company, and in 2011 the plant was closed. In early May the company announced it is closing multiple Illinois coal plants with 2,800 megawatts (MW) of generating capacity.

Earlier this year Dynegy sought approval to fortify the banks of the Vermilion Middle Fork. While the plant was still operating, the company had proposed similar measures. But regulators denied permission because construction could have violated legal protections on the river.

“We have been diligently working with the various regulatory agencies for several years to obtain approval to implement riverbank stabilization efforts,” Hirschfield said. “Multiple stakeholders with diverging interests have been involved in that process. We are hopeful of receiving the necessary approvals to perform riverbank stabilization activities in the near future.”

In an April letter to the IEPA, Rehn said permission should again be denied.

“Continued armoring of the entire bank in perpetuity is not only expensive, but unlikely to provide consistent protection,” wrote Rehn. “Moreover, it fails to address the central problem: the coal ash impoundments were built in the floodplain of a river that has demonstrated high erosive capacity.”

Pam and Lan Richart are founders of the Eco-Justice Collaborative and played a major role in the campaign to shut down Chicago’s two coal-fired power plants. Now they are focusing on the risks posed by coal in central Illinois, including to the Vermilion. Pam Richart said they are worried that without stricter state rules, Dynegy will obtain approval to cap and close the coal ash pits and absolve themselves of responsibility for any problems that might occur in the future as the river rises and shifts course.

“This could be closed and stable for a period of time, but when you leave that much toxic material adjacent to the dynamic flow of a river, you do that for perpetuity and the public will be dealing with the problem some time down the road,” said Lan Richart.

“Our concern is they get approval for closure and they walk away, but we know it has to be maintained by someone — whose responsibility will that be?” added Pam Richart. “Dynegy bought it with their eyes wide open, they shouldn’t try to pass it on to future generations and the taxpayers of Illinois.”