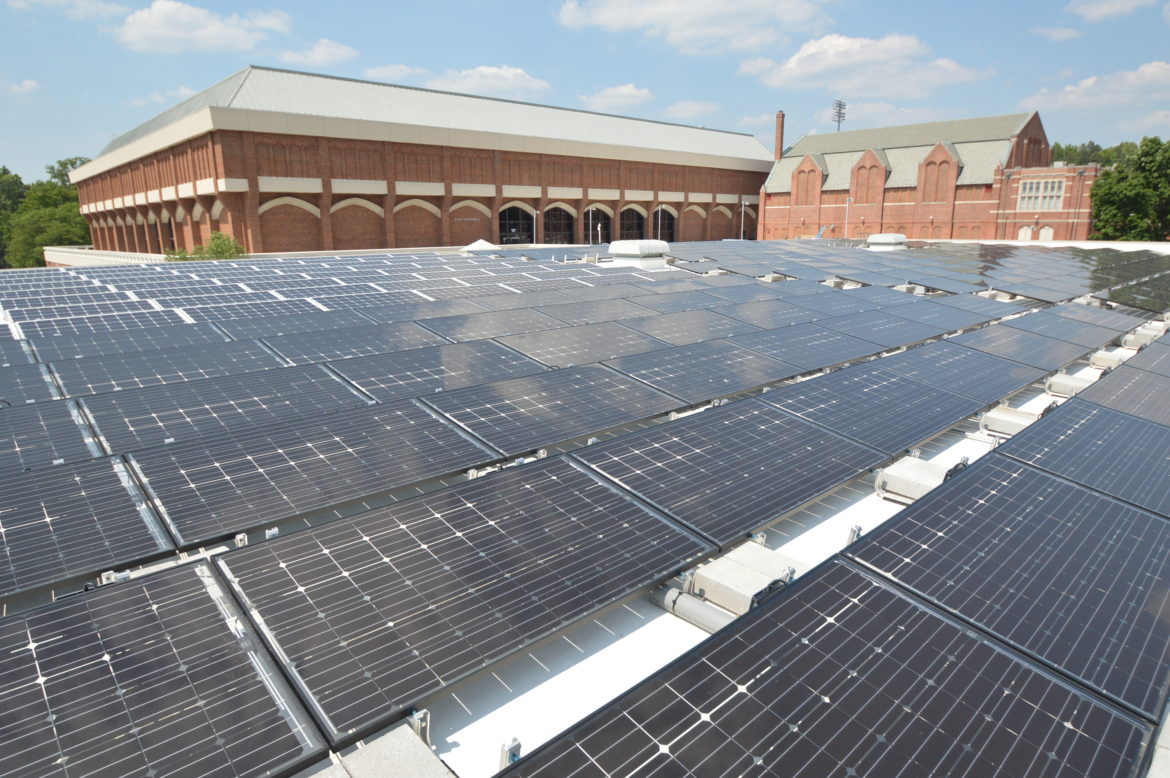 This 205 kW solar array, developed by Secure Futures LLC, was installed at the University of Richmond as part of a pilot program for Power Purchase Agreements in Virginia.

While this year’s Virginia General Assembly declined to take up significant proposals relating to solar power, stakeholders are trying to lay the groundwork for potential action next year.

A handful of bills, such as a proposal to authorize purchase power agreements (PPA’s) statewide beyond a current pilot program were assigned to Republican-controlled “Special Subcommittees” of the Virginia House and Senate full committees that handle energy issues. They are to begin meeting tomorrow.

Separately, a working group of stakeholders has begun meeting to make solar and other recommendations for the 2017 General Assembly. The group is led by Dominion Virginia Power – often perceived by advocates as hostile to solar – and the regional chapter of the Solar Energy Industries Association, and includes Appalachian Power and rural cooperatives, as well as advocates for solar power.

One of those advocates, Karen Schaufeld, a farm owner in Northern Virginia, lobbied for solar policy in this year’s General Assembly.

“We should have Virginia-made solar power,” said Schaufeld, who is trying to rally support via an informational website and owns a 474 kW solar system that serves nine buildings on her farm. “There should be room for everybody at the table. I don’t know why we want to hamper our economy by relying on others.”

The group’s stakeholders hired Mark Rubin, a former lobbyist who is executive director of the Virginia Center for Consensus Building at the Virginia Commonwealth University, to facilitate their meetings.

“You have a very complex policy problem,” Rubin said in an interview. “The best thing diverse stakeholders can do is to tap into their own expertise to come up with a workable consensus solution to the problem. This is then submitted as legislation to assure that the broader public’s interests are being met by the stakeholders’ solution.”

A ‘huge gap’ in Virginia

Among the other hurdles to growing solar in Virginia are the lack of a renewable electricity requirement and realistic options for community solar and distributed, customer-owned solar.

Dominion points to a modest “voluntary” goal for renewable electricity of 15 percent by 2025 but is not bound by it. Community solar, where people own a share of a solar system and earn credits on their power bills, is flourishing in many states but not in Virginia.

There is one indication of how popular community solar could become in Virginia. The BARC Electric Cooperative, based in the west-central town of Millboro, is about to complete a 550 kW system that has 203 residential and nine business subscribers who couldn’t easily install solar on their own. But to pull it off, BARC needed grants from the Appalachian Regional Commission and the U.S. Department of Agriculture.

Virginia does have its share of innovators and entrepreneurs who have found ways to serve those keenly interested in solar.

One of them is Tony Smith. Through his solar development company, Secure Futures LLC in Staunton, Virginia, Smith has almost singlehandedly carved out a niche to develop and own rooftop solar systems for academic institutions and other commercial-scale customers using Power Purchase Agreements (PPAs) under a state-authorized pilot program. The program demonstrates how distributed solar could work in Virginia.

Smith could talk a long time about the about the financial barriers to distributed and customer-owned generation, along with prohibitions on third-party financing.

“We’ve got to address those in Virginia if we’re really going to bite into the huge gap between Virginia and other states,” Smith said.

Much of solar’s real value is lost if it’s rolled into a utility’s generation portfolio, Smith said. “Solar has the instantaneous capacity to deliver power on site especially when it’s needed to meet peak demand.”

Secure Futures completed a solar array at the University of Richmond’s recreation center in April. Secure Futures sells the electricity at a set rate for a 20-year period, saving the University money and enabling a significant step toward carbon neutrality by 2050 by claiming the project’s SRECs. Meanwhile, the investor who funded the project can claim the 30 percent federal Investment Tax Credit and accelerated depreciation.

The PPA model is working in many other states but it needs a state standard for renewable sources, not Dominion’s voluntary goal, Smith says. Along with the requirement comes solar renewable energy credits, or SRECs, which become an income stream for system owners on top of tax credits. Together, these incentives work to attract the private capital which is essential for PPAs to help grow the solar market.

Some solar project developers in Virginia see an opening tied to a ruling Dominion received recently from the IRS – a tax and rate treatment, which still needs to be affirmed by the state’s utility commission.

The ruling appears to authorize a utility to base its costs on an index pegged to project costs incurred by non-utility developers. Such an index is expected to be significantly lower than traditional costs filed by utilities.

Francis Hodsoll, co-founder of project developer Solunesco in Reston, Virginia, said he expects Dominion “will set the price for power from its regulated solar assets using the market index price.” And that price index in turn “will be set by competitive market players bidding in pricing for solar.” He sees Dominion and its ratepayers benefiting by taking advantage of the solar investment tax credit and accelerated depreciation.

Smith, of Secure Futures, urged policymakers to be “cognizant of where the utility’s core strengths are. Their incentive is to own and operate, which creates inefficiencies that the ratepayer pays for. Partnering with solar companies would mean a much more efficient deployment of capital.”

At the grassroots level, the Community Power Network and other co-ops are enabling homeowners and small businesses to access group discounts through their bulk-purchasing model. When added to the 30 percent federal tax credit, recently extended in full through 2019, and solar’s declining costs, the math is making sense for more Virginians on their own.

Currently there are at least 12 solar co-ops completed or underway throughout the state. The Potomac Solar Co-op in Northern Virginia, which launched May 24, is the latest example.

“It’s been a chilling atmosphere for solar in Virginia,” said Kimberly Davis, an energy consultant in Fairfax Station. “But saying ‘solar doesn’t work in Virginia’ can be a self-fulfilling prophecy.”

“Every solar project is an ad for the next solar project,” added Davis. “People, businesses and organizations are making commitments for the future for a lot of reasons. Customer-owned distributed solar is working, both for customers and for local clean energy jobs in Virginia.”