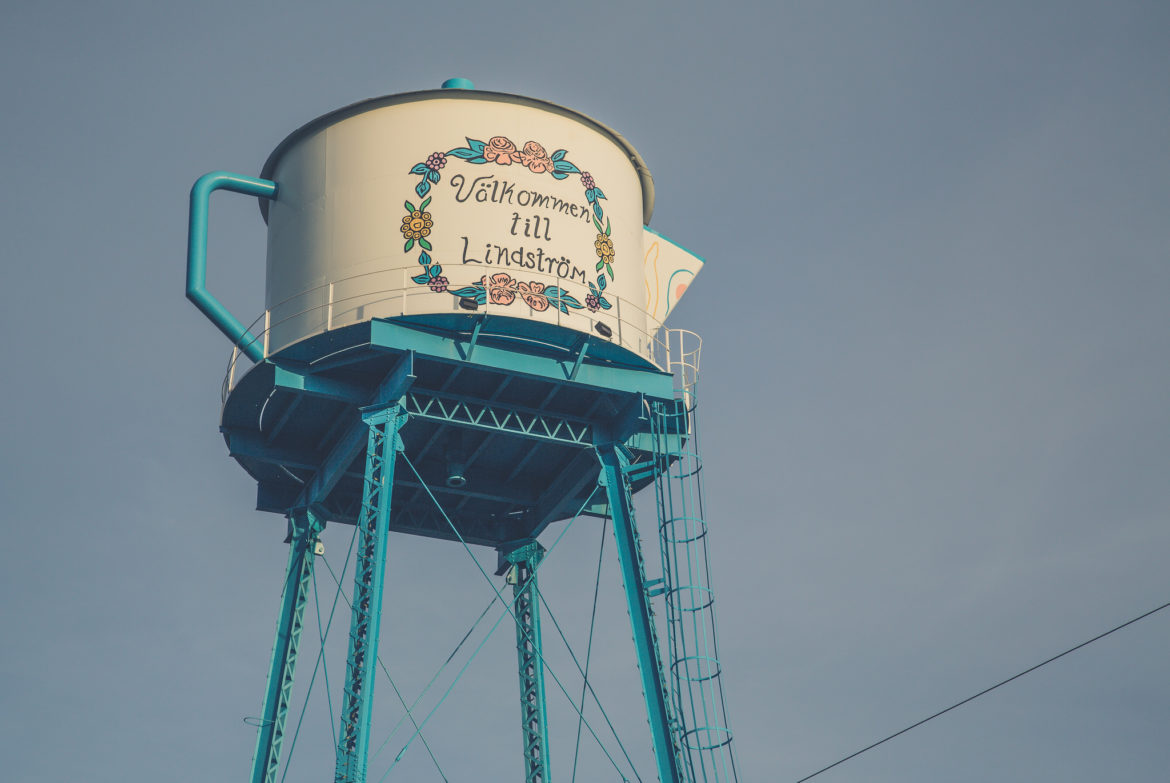 The teapot water tower in Lindstrom, Minnesota, one of the communities in the Chisago Lakes region.

A Minnesota community was recently named one of the eight finalists in the America’s Best Communities competition in part due to a focus on renewable energy.

Chisago Lakes consists of five small cities with a total population of more than 12,000 in Chisago County. Last year leaders from those communities entered the ABC contest with a blueprint for improvements in four key areas – arts culture tourism, broadband, economic development and quality of life.

The ABC program selected Chisago Lakes as one of the eight finalists out of 350 entries, with the only other Midwest city being Madison, Indiana. Chisago Lakes received $100,000 in money from the contest, which is sponsored by Frontier Communications, DISH Network, CoBank and The Weather Channel.

A $3 million check goes to the winner.

The county saw creating an “energy hub” as a differentiator from the other contestants.

“We saw the idea of the energy hub as a great addition for our businesses because it can help them with their bottom lines by lowering their energy costs and attract new businesses to clean energy,” said Nancy Hoffmann, executive director of the Chisago County Economic Development Authority.

The county hired Eutectics LLC, which has crafted “The Chisago Lakes Energy Hub” plan that developed a strategy for a net zero future. The communities could become 100 percent renewable with a $40 million investment, according to Eutectics, a firm started by  Jeremy Kalin, who formerly represented the area in the state legislature.

Chisago Lakes pitched the idea it could be powered by 100 percent renewable energy by 2025. The strategy isn’t all that far-fetched considering Chisago County has underway 174 MW of solar, much of utility scale projects, as well as home to an innovative winery microgrid.

“The Chisago Lakes community has a deep commitment to sustainability, driven by the area’s signature natural resources and the frugal and civic-minded Scandinavian roots,” Eutectics wrote in a report assessing the region’s energy potential.

“The longstanding ethic about resource conservation has been further strengthened by ongoing exchanges between the region’s municipalities and Swedish ‘sister cities.’”

In looking at opportunities, the company identified seven pilot projects, including efficiency and solar projects on county buildings, from libraries to jail. The report notes “the vast majority” of renewable energy will come from solar.

Some measures are underway. A Property Assessed Clean Energy (PACE) program has been introduced to the region to help with financing, especially for efficiency efforts. PACE allows building owners to pay for improvements through their assessments over a 20 year time frame.

Some businesses already have become involved in efficiency projects. Midwest One’s bank manager, Jason Gamble, embarked upon a $15,000 project this year that replaced traditional fluorescent lighting with LEDs, paid in part by a $5,000 rebate from Xcel Energy.

He figures to be saving $6,000 a year in energy costs, with a payback in 24 months, give or take. His electric bill since January has descended 33 percent. The lighting turned out to be not too hard or too bright, two concerns of staff. He’s also no longer up on a ladder every month changing light bulbs.

Midwest One now wants to outfit its 20 Twin Cities locations with LEDs. “Once we looked at the ROI the project was a total no-brainer,” said Gamble, who often suggests his clients shift to LEDs.

Moving forward, more work on solar energy could take place at Wild Mountain Recreation Center and Franconia Sculpture Park, two of the bigger tourist destinations in the county, added Wade Vitalis, a restaurant owner who helped lead economic development planning for the contest. With both locations the solar installations could have an educational component to inform visitors of the impact of clean power.

Lately local churches and schools are interested in adding solar to their buildings, a good sign the goal of being net zero could be reached.

“We’re in a sweet spot,” Vitalis said. “We have the potential to get there (to net zero) and not too far into the future.”