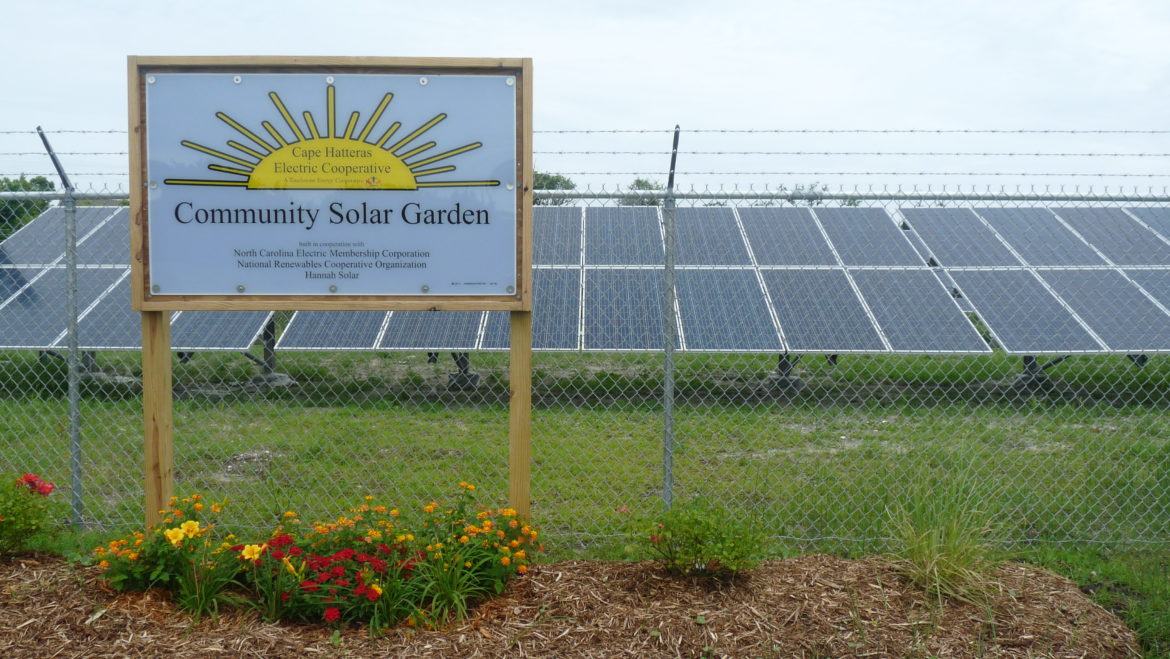 Despite the fact that the North Carolina General Assembly allowed renewable tax credits to expire at the end of last year, some residents of the state are finding ways to harness the sun’s energy through their rural electric cooperatives.

Community solar, where co-op members can buy a share of a project in exchange for a credit on their monthly bill, is an increasingly popular solution for people who want to support clean energy but may not be able to finance or site their own installation.

Cape Hatteras Electric Cooperative is one of the co-ops whose membership was yearning for solar, though, unlike other rural communities in the state, it was the opportunity to move toward energy independence, not lower energy bills, that drove the membership’s demand for solar energy.

In early 2015, the co-op’s board of directors approved plans for a solar garden on Hatteras Island, and this past February it came online.

Eventually, the co-op was offered a reduced-price parcel on Highway 12, the island’s main (and only) highway. The 50 kilowatt solar installation is at mile marker 71 where 180 panels gleam behind a chainlink fence.

In some areas of the state, adjacent property owners have objected to solar installations, citing worries about property values, but that wasn’t the case for this project.

“The neighbor behind the installation was very excited about the installation,” said Laura Ertle, the co-op’s director of marketing and public relations, pointing to a three-story teal-colored home whose roof can be seen over the solar garden. “We are very fortunate that people have been so supportive of the project,” Ertle added.

“Our members are more interested in community solar than on-site solar,” said Flythe, noting that in a storm-prone area like theirs, residents want to avoid poking holes in their roofs.

For every solar panel members purchase energy rights to, they will see credits on their electricity bills equal to the annual average amount of energy produced by the panels for the lifetime of the project, which is projected to be 20 years. That means they receive a monetary reimbursement – not energy credits or offsets.

That figure is calculated annually since the amount of energy produced each year can vary, Ertle said.

The solar installation began producing electricity in February, so it’s not yet certain how much energy will be produced this year, or how much customers will be credited for this fiscal year. The project is estimated to generate 88 megawatts annually.

Members can participate even if they are not homeowners (i.e. renters), and should a member move off of the island the co-op can buy back the energy rights at their amortized value. But, if the member is just moving to another house on the island, they can take their solar energy rights with them.

The island’s solar installation is located next to the Hatteras Island Ocean Center, which is focused on conservation and ecology. The center created a display where visitors can see and touch a solar panel like the ones they can see from the highway, and they can also play with an interactive feature that indicates how much electricity the outdoor panels are generating in that moment and over time.

“It’s been great for providing an educational opportunity, too,” said Flythe, “not only to our co-op members but also to the students who live here, and to tourists, too.”

An estimated 4,000 people live on Hatteras Island year around, but during the summer tourist season, Flythe said, there could be 50,000 people visiting at any one time. “We can touch a lot of people with this project,” Flythe said. She also serves as president of the North Carolina Association of Electric Cooperatives.

Interactive displays are also located in the island’s two schools, said Ertle, “So the kids can see that it doesn’t have to be a bright, sunny day for the installation to produce energy.”