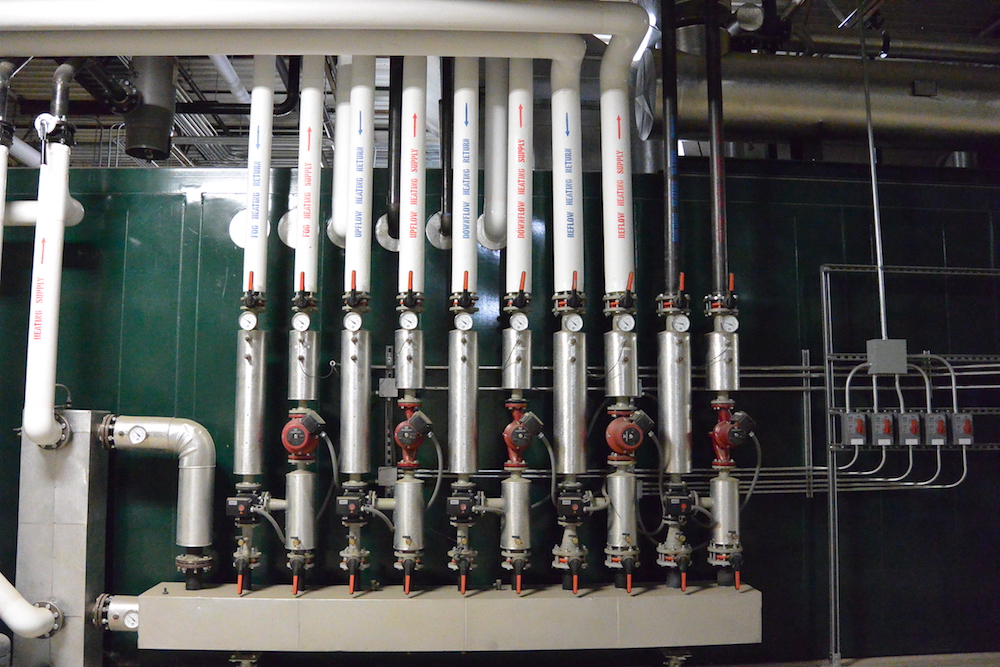 Critics say Illinois utility ComEd could be doing more to promote its incentive program for combined heat and power systems, like the one shown here in Michigan.

Although Illinois-based Commonwealth Edison began offering incentives for combined heat and power systems two years ago, almost none of its customers have pursued it — an outcome that one proponent of the highly efficient technology attributes to lackluster marketing.

Patricia Sharkey, speaking for the Midwest Cogeneration Association, said she learned early this year that only one application was being processed for the incentive, which in theory would pay up to $2 million in a production subsidy for a project. Not only was there limited marketing of the program, according to Sharkey, but information about the incentive “was buried.”

“That’s when we said, ‘Hey, you have to advertise this,’” she said. “They didn’t have any written materials on it. We’d like to see them more robustly marketing the program.”

The experience has been quite different at Illinois’ energy office, which is charged with marketing ComEd’s CHP incentive — along with all utility-sponsored efficiency benefits — to public entities in the state. That office received 17 applications, four of which now have completed the design phase.

CHP, or cogeneration, is an efficient way of producing both steam and electricity from one fuel source. Although not often included in utility efficiency programs along with the more-typical LED lightbulbs and energy-efficient appliances, CHP can result in significant energy savings, primarily among industrial and institutional facilities.

Under the right circumstances, “You can get a lot of bang for your buck,” said Cliff Haefke, who directs the Energy Resources Center at the University of Illinois at Chicago. “We’ve seen CHP be competitive in terms of energy savings.”

Although Haefke agreed that ComEd’s venture into CHP “has been off to a slow start,” he’s hopeful that some policy changes in the CHP environment in Illinois may hasten adoption of the technology there.

But Martin Kushler, a senior fellow with the American Council for an Energy-Efficient Economy, said that Illinois utilities in general may not be “hungry” for more efficiency because of a state cap on utility spending on efficiency. Although the state established an incremental efficiency goal that gradually ramped up to 2 percent in 2015, it also imposed a cap on spending. If a utility couldn’t reach the goal without spending less than 2 percent of overall customer rates, it was allowed to meet a lower savings goal.

“The utilities are all hitting the spending cap before they can get to the 2 percent,” Kushler said. “Until they fix that cap, they aren’t hungry for any more savings.”

Rather than using broad-spectrum marketing tools like brochures and a dedicated website, ComEd’s director of energy efficiency, George Malek, said the company has focused on more targeted messages. The company sends out employees and other “agents” to visit individually with certain large customers each year and review with them the range of available efficiency benefits.

ComEd did recently produce some written marketing material, though Sharkey said she would like to see the utility create a separate website outlining the CHP incentive, as has been done at Baltimore Gas and Electric, which two years ago began offering a CHP subsidy very similar to the one now available through ComEd.

In 2012, the utility determined that its existing suite of efficiency incentives was unlikely to fulfill Maryland’s ambitious efficiency mandate to cut energy use and energy demand by 15 percent by 2015, relative to a 2007 baseline. The utility quickly put together a CHP benefit that it was able to make available by late 2012. Due to the long development time, the first CHP system was not installed until 2014, according to Bill Wolf, who manages energy efficiency programs for the utility’s commercial and industrial customers.

During 2014, five CHP systems — representing about 25,000 megawatt hours in annual reduced energy use — began operating. The largest was a 1.8-megawatt (MW) system at a hospital. Although no systems were completed in 2015, three more are expected to go online in 2016. One of those is an 8-MW system at the Aberdeen Proving Ground, an Army facility that tests weapons. It is likely to begin operating in July.

The eight projects will relieve Baltimore Gas and Electric’s system of 12 MW of demand and about 91,000 megawatt hours in reduced energy use each year.

When ComEd was presenting its efficiency program to the Illinois Commerce Commission a few years ago, Sharkey said that her association noticed that CHP was not mentioned. So her group lobbied hard before the commission to persuade ComEd to offer this financial incentive for cogeneration.

Cogeneration can be a highly efficient system for energy users of almost all sizes that operate on a continual basis and require substantial amounts of both forms of energy. Some of the best candidates are hospitals, schools and universities, wastewater treatment plants, prisons, nursing homes and manufacturing plants.

In states with mandatory energy-efficiency goals, Sharkey said that some utilities, including ComEd, “are finding that the ways they used to meet these goals are no longer working. We’ve been saying that the industrial sector for a long time hasn’t gotten the attention it should in terms of the savings it can get from some of these projects.”

A similar story is unfolding in Michigan, which experts say has vast untapped CHP potential across the state, but educational and policy barriers have prevented widespread adoption.

Additionally, Sharkey believes that utility managers are uneasy with the large-scale deployment of CHP. If a CHP program should fail to deliver, that would be a major loss to a utility’s efficiency efforts and budget, she said. While more incremental efforts — like light bulbs — can save tiny amounts of energy, if they’re not used, the losses are quite modest, she noted.

Relative to other efficiency technologies, CHP is quite costly, ComEd’s Malek said. And although he said federal research indicates that cogeneration “is a good measure for certain types of customers,” he believes it isn’t broadly applicable among the utility’s customers. By extension, Malek isn’t persuaded that a more assertive marketing campaign is needed.