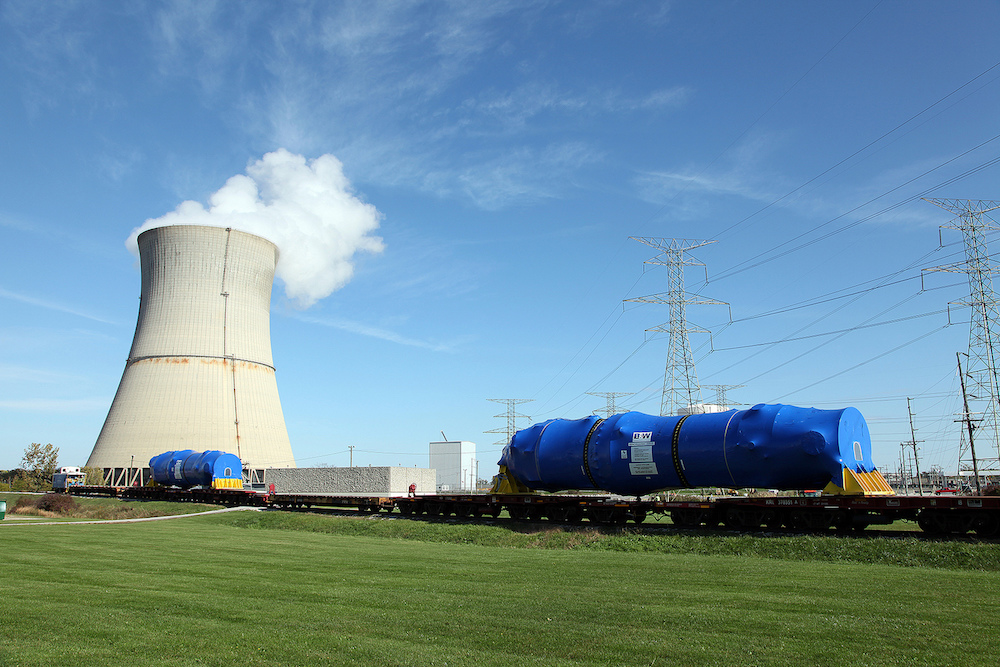 New steam generators are delivered in 2013 to FirstEnergy's Davis-Besse power station in Ohio.

Environmental and consumer advocates joined with energy companies last week in asking federal regulators to reject FirstEnergy’s revised plan to impose a mandatory surcharge on all of its utility distribution customers in Ohio. Opponents of the plan have called it a “bailout” for uncompetitive coal and nuclear plants.

As approved by the Public Utilities Commission of Ohio in March, that plan called for FirstEnergy’s Ohio utilities to enter into a power purchase agreement guaranteeing the sale of electricity from certain affiliated plants. All utility customers would pay or get a credit for the difference between the price under the agreement and the prevailing market price when the electricity is produced.

Weeks after the PUCO decision, however, the Federal Energy Regulatory Commission ruled that the agreement could not proceed without prior federal review to guard against anti-competitive impacts in the electricity market.

FirstEnergy did not appeal that order. Instead, it submitted a revised plan last month that substantially resembles that earlier plan, but without any express provision for a power purchase agreement.

“It’s a classic sort of sleight of hand,” said Dick Munson of the Environmental Defense Fund. “My guess is that FERC will see through the sham. It’s just illegal affiliate dealing.”

FirstEnergy’s change “to a single element” of the plan “would provide the same price protection for customers without the need for the PPA or FERC approval,” FirstEnergy President and CEO Chuck Jones said at last month’s annual meeting of shareholders.

In a joint brief filed last week with federal regulators, industry competitors and environmental groups argued that the utility has basically replaced the express agreement to guarantee electricity sales with a “virtual power purchase agreement,” or virtual PPA. And that revised plan is “a shadow version” of the earlier arrangement to charge captive consumers for uneconomic coal and nuclear generation, the challengers argued.

“From our perspective, it’s just a work-around of this FERC decision,” said Trish Demeter, managing director of energy programs at the Ohio Environmental Council. “At the end of the day, it’s a bailout of even bigger proportions, quite honestly.”

Specifically, the revised plan requires that at least 3,200 megawatts of fossil fuel or nuclear generation now owned by FirstEnergy Solutions would continue to operate, the challengers noted. That’s about the same amount of output from the plants covered by the former plan — which include the Davis Besse nuclear plant and the Sammis coal-fired plant — with its express power purchase agreement, observed Matthew Kahal, an expert witness for the Office of the Ohio Consumers’ Counsel.

FirstEnergy has claimed that consumers would eventually come out ahead, based on its assumption that gas prices will increase significantly over the next eight years.

However, a May 2016 report by the Energy Information Administration projects that natural gas prices will remain below $5 per million British thermal units through 2040. That projection is true with or without the federal Clean Power Plan, the agency reported. In challengers’ eyes, that makes it much more likely that consumers will end up on the losing end of FirstEnergy’s proposed deal.

Under FirstEnergy’s revised plan, captive consumers could still be on the hook for up to $3.6 billion over an eight-year period, economic analyst James Wilson stated in testimony filed with Ohio regulators this week on behalf of the Office of the Ohio Consumers’ Counsel.

Challengers in the FERC proceeding believe the revised plan remains anti-competitive and should not proceed without close scrutiny. Among other things, they argued, “A regulated entity may not do indirectly what it is prohibited from doing directly.”

FirstEnergy’s case before FERC will hinge on whether it can persuade federal regulators that the revised plan really is different in terms of its impact on captive consumers and on the competitive market. However, challengers noted, FirstEnergy has told Ohio regulators otherwise.

Last month, FirstEnergy told the PUCO that its revised plan “will function in a very similar manner for customers.” And earlier this week, FirstEnergy told the PUCO that it should reject arguments by some challengers that the revised plan “fundamentally” alters and “drastically” departs from the plan approved in the Ohio regulators March 31 order.

“The opposite is true,” the company’s lawyers wrote in their brief.

The issue matters in the PUCO proceeding because the commission’s March 31 order made multiple references to the perceived need for the power purchase agreement. FirstEnergy had argued to the PUCO that the agreement was necessary to keep specific plants going and to protect jobs at those places.

“Now FirstEnergy is trying to say, no, it’s not related to the plants,” Munson said. “They’re simply saying give us the money.”

That change in the underlying justification goes beyond the ordinary scope of a rehearing on a PUCO order, said Shannon Fisk at EarthJustice, which represents the Sierra Club.

“If FirstEnergy wanted to propose this for the form of their bailout, they should have done it in their initial application,” Fisk said. “We shouldn’t suddenly have been faced with an entirely new proposal.”

Still, the “virtual PPA mirrors the negative environmental and consumer impacts” of FirstEnergy’s earlier plan, lawyers for the Ohio Environmental Council and the Environmental Defense Fund wrote in a joint brief. In their view, the plan “subjects captive customers in Ohio to artificially inflated prices, [and] also needlessly commits Ohioans to procuring energy from aging facilities that are more costly and polluting than many of the … alternatives available in the competitive energy and capacity markets.”

The PUCO is allowing limited discovery on FirstEnergy’s revised plan. An evidentiary hearing on the modified plan is set to begin on July 11. Whether state regulators ultimately accept or reject it remains to be seen.

“It’s a question of how much the commission wants to try to bend over backwards for them,” Demeter said.

Even if the PUCO and Ohio Supreme Court ultimately approve the plan, however, it must still pass muster before FERC. And FERC found an earlier version of the plan would require careful scrutiny by federal regulators.

“I can’t imagine that FERC would be happy that a utility is trying to game the system to achieve the exact same result, but just in a way that somehow would foreclose FERC from being able to review that,” Fisk said.

AEP revises its own ‘bailout’ plan

Earlier this year, American Electric Power had also gotten a go-ahead from the PUCO for its own power purchase agreement deal to guarantee sales from several coal-fired power plants owned by its affiliates. FERC likewise ruled this spring the deal between related entities would have to undergo scrutiny by federal regulators.

AEP announced it would aim to seek more re-regulation in Ohio and scaled back its proposal to include only its share of electricity from two older coal plants owned by the Ohio Valley Electric Corporation. AEP, FirstEnergy and other utilities own that corporation jointly.

Consumer advocates, environmental groups, and industry competitors have opposed that move as well. Among other things, the challengers note that the revised plan is substantially similar to an earlier plan that the PUCO rejected last year as not being in the interests of Ohio ratepayers.

Additionally, in a move that has drawn ire from environmental groups, the company moved last month to change its ratepayer plan to include additional charges for fixed costs and to make other revisions. The cases remain open before the PUCO.