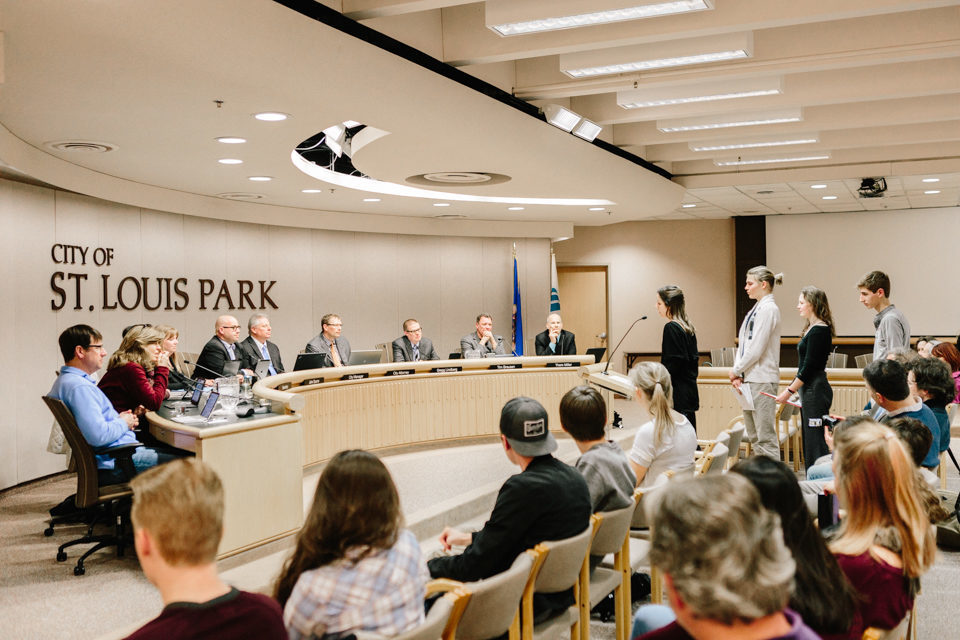 Members of the group iMatter moved a Minneapolis suburb to adopt an aggressive climate change resolution.

Officials in a Minneapolis suburb adopted an aggressive greenhouse-gas-reduction policy last month that was brought forth by a group of local high schoolers who are part of a national climate change movement.

Drafted by iMatter, a national youth-led group, the resolution aims for net-zero emissions by 2040 in St. Louis Park, a suburb immediately west of Minneapolis with a population of roughly 47,000. The resolution also commits the city to working with youth activists on its future goals and planning.

iMatter is a member of RE-AMP, which publishes Midwest Energy News.

The students were the first in the country to have a resolution passed that was prepared by iMatter, which is training high school students across the nation to lobby their communities to pass a “Climate Inheritance Resolution.” The group’s website says similar efforts are underway in cities in New York, Iowa, Illinois, California and Canada.

The measure passed the St. Louis Park city council unanimously. It calls for protection of “the children and grandchildren of this community from the risks of climate destruction.”

The city council’s move “shows they’re all on the same page with us,” said Sophia Skinner, a junior. “We really didn’t know what to expect, but we got really positive feedback from them when we put ourselves out there and talked about the resolution. It was really rewarding that they wanted to work with us.”

“The fact that young people are bringing these issues forward is incredibly impactful,” Spano said in an email. “We have a phrase that we often use on our council that the result of decisions we make in any particular instance will be felt by, and paid for, by generations of residents who are not yet born.

“When a group of students steps forward and articulates very clearly what their highest priorities are in a community they live in, it carries a great deal of weight. … Our youth carry a great deal of moral authority when it comes to addressing the issues of our future.”

The iMatter student organization at the high school has around 15 members, said executive director and chief mentor Larry Kraft. The students had participated in Roots & Shoots, a youth-led group started by anthropologist Jane Goodall, before adding iMatter to the mix.

The report card “creates a place to acknowledge what the city council had done and tells them where they can improve in regards to environmental needs of our city,” said junior Jayne Stevenson, who appeared before the St. Louis Park council.

Added sophomore Lukas Wrede: “It shows how much they’re not doing on net-zero planning.”

The city received an A- on renewable energy, which is more of a testament to Minnesota’s aggressive renewable energy mandates than on city projects, Kraft said. The city earned an A+ in waste, in part due to a composting program.

Alec Loorz, who founded iMatter, said he was impressed by both the students and the city council.

“I think the work the St. Louis Park group has done by is pretty incredible,” he said. “It blew me away to see the positive feedback they got from the city council. The city council leaders heard the message.”

The council’s support should come as no surprise, Mayor Spano said. Since he took office four years ago, St. Louis Park has increased organic-waste collection, created a stewardship and sustainability commission and added a sustainability coordinator to its staff.

Secondly, Spano concedes the city has a big hole in sustainability planning, instead tackling other related issues like stormwater management, land use and its environmental impact, and solid waste and composting.

“Climate adaptation has not been something that we have focused as much time on,” he said.

iMatter is the latest effort by Loorz, who nine years ago — as a 13-year-old — started Kids Versus Climate Change. With tutelage from climate change leader and former Vice President Al Gore, Loorz became a bit of a national celebrity as a youth willing to speak out about climate change.

He gave several keynote speeches and as a 14-year-old developed a sea-level awareness project in his hometown of Ventura, California. He and a group of middle schoolers installed 9-foot poles to showcase just how high the sea might be in the future.

The city council there agreed to include the possibility of rising sea levels in its long-range planning.

In 2011, after organizing a campaign to raise awareness about climate change that occurred in more than 200 cities, Loorz had the seeds of an idea that became iMatter.

While the effort attracted media attention and involvement, he saw it as largely symbolic gesture that did not force political change. He felt the next step would have to be engaging students in encouraging their communities to take concrete strategies on curbing climate change.

He and his supporters developed a website that offers standard climate report cards, tips on grassroots organizing, developing petitions, team building, dealing with media and other issues.

The movement will have authenticity because of who is leading the charge, Loorz said.

“It won’t stop the crisis, but it will change the narrative — talking about climate change in terms of generations to come,” he said. “Young people are the only constituency that can pull this off by saying, ‘This is going to affect our future and we think we should be taken seriously.’”