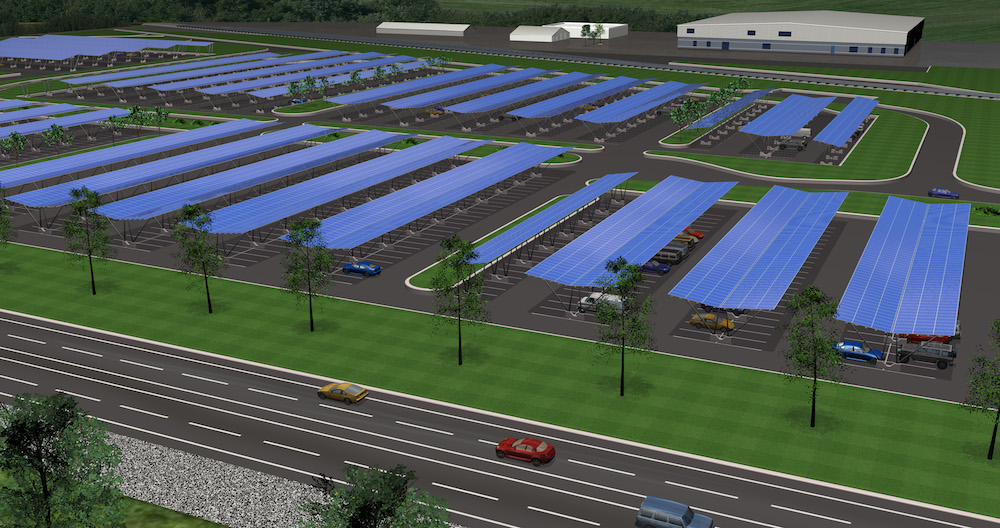 A rendering of Inovateus Solar's plans to install 13 megawatts of solar across Michigan State University's campus.

Following a week of uncertainty, the developer of a $24 million, 13-megawatt solar installation at Michigan State University says the project will move forward.

MSU last year sought a third-party solar developer as part of its planned transition away from coal. Indiana-based Inovateus Solar plans to install more than 40,000 panels on roof structures in parking lots across campus. The MSU Board of Trustees approved the project in September 2015.

But the plan was in doubt after local officials last week denied Inovateus’ request for an 80 percent tax abatement on the solar equipment for 25 years. The East Lansing City Council approved the abatement for taxes on “personal property” at 80 percent for 10 years.

A 25-year abatement would have saved the company about $4.4 million. Over 10 years, the abatement is worth $2.6 million, filings show.

“We’re trying to not let anything stop us from getting the project built and completed,” he said.

Inovateus hoped to start construction in February, “but the tax thing has definitely held it up,” one company official said before the council vote last week.

While some council members saw the project as a win-win for the city — a boost in tax revenue that otherwise would not have come in as well as a notch in the city’s and university’s sustainability plans — opponents felt there was too much potential tax revenue lost under the original proposal and that the project could have been built for less as the cost of solar continues to drop.

More broadly, though, clean energy groups say the project sheds light on Michigan’s outdated and patchwork tax policy when it comes to renewable energy projects, particularly in assessing the value of solar installations and how much in taxes should be paid on the equipment.

“When we deal with these solar and wind projects and have conversations about tax abatements, we end up really shining a light on the fact that the tax code favors typical, old sources of generation,” said Liesl Eichler Clark, president of the Michigan Energy Innovation Business Council. “There are tax incentives for fuels and different structures on capital you use to build old-school generation, whereas some of these types of generation that aren’t built into the tax code have to go to city councils for tax abatements, which creates a more challenging environment.”

For instance, in 2014 state lawmakers approved a bill package that made it easier to acquire land for pipelines as well as gave tax breaks to oil and gas companies that used enhanced oil recovery drilling methods.

A solution for solar projects may be in more uniform guidelines by the Michigan Tax Commission, advocates say.

“The MSU case does shed some light on the fact that we may need a statewide or comprehensive approach,” said Jack Schmitt, deputy director of the Michigan League of Conservation Voters. “I was disappointed to see (the council’s) decision. It speaks to the fact that it’s something as a state — particularly as the cost of solar comes down and we see greater commitments to generating energy from renewable sources — we need further direction on.”

Supporters also say that municipalities should be able to find new ways of bringing in revenue after years of cuts in statutory revenue sharing from the state.

“The backdrop for all of this is the continual decline in revenue sharing to communities creating different priorities that they have to have,” Eichler Clark said.

A 1998 state law allows local units of government to offer personal property tax exemptions, typically for businesses “engaged in manufacturing, mining, research and development, wholesale trade or office operations,” according to the state Department of Treasury.

But clean-energy supporters say solar development is unlike traditional manufacturing projects — or even coal and natural gas plants — that receive public services for the taxes paid on personal property.

Kanczuzewski called working through the tax issues with the city “a challenge.”

“It’s also a challenge on the state level,” he said. “The property tax assessment for solar projects (in Michigan) is very hard to understand and different than almost 40 other states in the country. There’s a lot of gray area in terms of the tax law there.”

Eichler Clark agrees that there is too much uncertainty for developers.

“It’s not just the abatement that we ran into with the East Lansing project, but also the general tax treatment (of solar) and how different projects are looked at by assessors,” Eichler Clark said. “There’s some guidance at the state level, but not a lot. People can end up in situations where they have unforeseen tax consequences.”

Eichler Clark said the MSU case is notable for its scale, but that the issue has come up with residential solar projects. “Assessors have no clear direction on how to assess the value of projects,” she said.

She hopes that it’s an issue that will be discussed with lawmakers over the next year. Schmitt, of the League of Conservation Voters, called it a “secondary issue” behind a more comprehensive energy policy being discussed at the legislature.

“You need to have certainty in a tax environment,” Eichler Clark said. “The East Lansing project underscores the fact that when you don’t have certainty from the state, projects may not happen.”