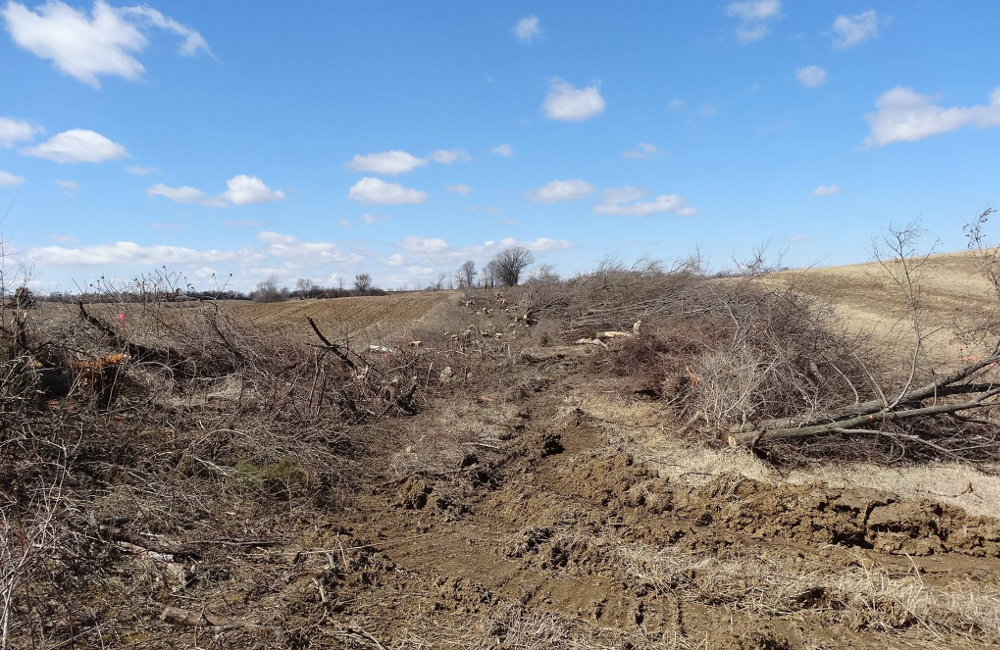 A location in Buffalo Township, Minnesota that shows trees cleared for a planned solar project.

In Minnesota, a recent controversy over clear-cutting of trees for a solar development let to both a county moratorium and state legislation aimed exclusively at solar projects. Bird deaths at wind farms make headlines despite representing only a tiny fraction of mortality rates.

These issues and others raise the question: To what extent does the renewable energy industry face unique crisis management and public messaging challenges that simply don’t plague other industrial developers?

For insight into this question, we spoke with Jon Austin, a Minneapolis-based corporate-crisis and reputation management consultant. Once the public relations voice for Northwest Airlines, Austin has represented everyone from auto manufacturers to solar and geothermal companies trying to negotiate California’s thicket of referendum-driven regulations.

This is an edited version of our conversation.

Midwest Energy News: It seems there is almost built-in suspicion and ideological opposition to green energy in some corners. As a brand reputation and crisis manager, what considerations go into dealing with that kind of a scenario?

Austin: I think what has become a particular issue these days is social media and hyper-connectedness. It has become easier than ever to contextualize and share information and to find like-minded people out there. For example, anytime somebody wants to redevelop a property in your little neighborhood, there is an instant galvanizing of opposition.

Take that and scale it up to something the size of a large solar development and the potential for opposition grows exponentially. For everybody who thinks that solar energy is the way to go, somebody else talks about the loss of ground cover, the loss of overhead green space and disruptions from dust creation, things like that. For wind power, it is the same thing.

Developers of a Minnesota solar project that had generated controversy over tree removal are circulating a video clip containing testimonials from local residents in other towns who back their solar project. The underlying message seems to be, “These are good people. Therefore, you should see our project as a good thing.” Is that effective messaging?

It is—if it reflects reality. Again, a project like this is always going to be opposed. But if you’ve got real local support then emphasizing that is a very effective tactic for a company based out of town.

If, however, your “local support” ends up being a guy who is on your payroll and his brother who got roped into appearing on camera, at the end of the day that has a high risk of blowing up on you.

You don’t necessarily have to have unanimity or even a majority, but if you convey that you have support, it has to be credible. Because these days, if it is not you will get outed pretty quickly.

Granting that you’re probably not watching this issue too closely, what advice would you give people in the renewables industry in terms of making those local connections and staying committed to transparency?

There is advantage sometimes in inviting your opponents in. I think that is true in a lot of these hyper-local things. Invite people in that you might think of as your opponents. Say, “Listen, is there any common ground on this or are you simply flat-out opposed to anything here?” A lot of times, especially before positions get hardened and it becomes personal to some degree, there is an opportunity, I think, to find accommodations.

‘There are few things more dangerous than a legislator with a news clip in his or her hand thinking that they have to pass legislation on the spot to deal with something.’

Possibly emblematic of that is clear-cutting that stand of hardwood trees at Aurora’s Lake Pulaski site. The local reaction seems to have been that the clear-cutting demonstrates that the developers people don’t care about local residents and the state is letting them run roughshod.

Exactly right. And it’s a thin defense these days to say, “We disclosed it in a filing.” If you are going to represent yourself as a locally connected good neighbor, I think you have to ask yourself, “OK what does this mean, not just from my perspective but from my neighbor’s perspective?”

Given that Minnesota this year passed legislation aimed directly at restraining solar industry property development with respect to clear-cutting trees, how would you advise a solar company client that was thinking of doing business in the state? Would it concern you enough to suggest thinking twice before going in?

Yeah! Because the other corollary to this is that once legislation gets enshrined and becomes actual law, it is damned hard to get it out. Even bad laws sometimes can’t get repealed very easily.

There are few things more dangerous than a legislator with a news clip in his or her hand thinking that they have to pass legislation on the spot to deal with something. We see this happen all the time. You can end up with unintended consequences like making it harder for renewable energy companies to get a foothold in the community.

Is it simply a fact of life that renewable energy developers have to work harder to mitigate environmental impacts, and to execute messaging, than other types of industrial and land developers?

I’d say yes. Particularly, if you are an energy company and you say you are committed to environmentally friendly means of energy production, and then you clear-cut, you have to be at least prepared for possibility that somebody is going to find those two statements to be—if not hypocritical—at least in conflict. Or, that they will require some additional level of explanation.

If you operate a solar production facility, you can’t do it in the shade—that seems obvious. But at the same time you have to look at it from the point of view of the neighbors. Are there approaches to development that are maybe more expensive but that can mitigate some of this? Being a good neighbor and being committed to the long term, sometimes that actually costs money.

Is there a moral to this story for the renewable energy industry?

I think that effort is not often applied. And I think it is beneficial when it is.