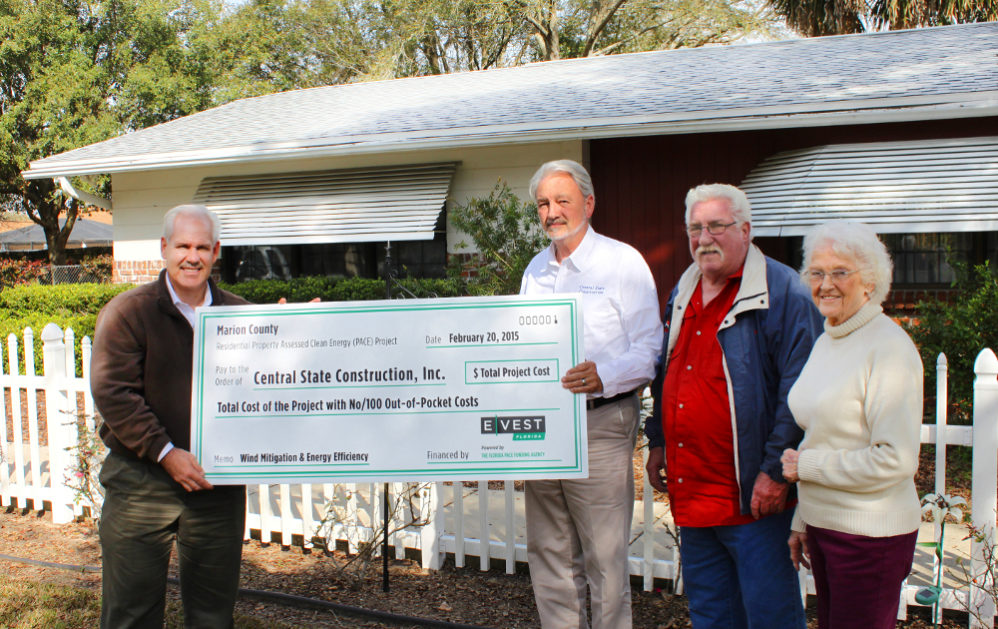 Betty and James Bonnet of Marion County, Florida, used PACE financing to upgrade their roof in 2015.

Property-assessed financing for energy-related improvements to homes and businesses is starting to take off in Florida.

Since Florida’s Supreme Court upheld the state’s Property Assessed Clean Energy (PACE) law against challenges last autumn, applications for the innovative financing have been rising fast, and more local governments are signing up to offer the program in their areas, PACE leaders in Florida say.

“We were probably getting 200 to 300 applications a month, and last month, we got about 1,200,” said Joseph Spector, vice president of operations for Ygrene Energy Fund Florida, the largest PACE lender by far in the state. “Now, we’re active in an area of about 2.7 million people. By the end of the summer, as more cities and counties join, we could be at 5 million people – or about 25 percent of the state.”

Ygrene already has contracted about $74 million in PACE financing in Florida since starting three years ago in the state. It expects to sign up $100 million in new financing this year and at least $200 million more next year, Spector told Southeast Energy News.

Two other PACE players active nationwide also are ramping up in Florida. Renew Financial of Oakland, California entered the state last fall by buying EcoCity Partners of St. Petersburg, and is revising its PACE offerings. And Renovate America of San Diego, California is working to launch a residential program in Florida this October and to expand to businesses financing later, executives confirmed.

“There are no more regulatory or legal challenges” to PACE expansion in the state, said Mike Antheil, market development director in Florida for Renovate America. “It’s now about getting the word out to the people, and it’s trending in the right direction.”

A slow start amid legal challenges

Florida’s Legislature authorized the PACE program in 2010. The law lets property owners borrow funds to make energy improvements such as installing more efficient air conditioning systems, solar panels or hurricane-impact windows. The participants then pay back the money together with property taxes – just like an assessment.

In many cases, savings from increased energy efficiency as well as lower premiums on property insurance are big enough to cover the full cost of PACE repayment. That means the owner has no outlays upfront and no added costs in making the property improvements through PACE. Communities also gain, because contractors get new business and improved energy efficiency helps slow demand for new power plants, PACE advocates say.

Begun in California in 2008 and key to financing solar projects there, the PACE program was slow to take off in Florida – until this year.

That’s largely because of legal challenges, including one by the Florida Bankers Association. The bankers worried that repayment of PACE financing would come before repayment of bank mortgages, when properties were sold or re-financed. Similar cases have surfaced at the federal level and been resolved; the Federal Housing Administration is soon to publish guidance aimed to “unlock” PACE for homes with federally-backed mortgages, industry leaders said.

Last autumn, the Florida Supreme Court dismissed the bankers’ case for lack of standing, and it has upheld PACE in several other challenges, said attorney Erin L. Deady, who wrote an extensive article on PACE for the June 2016 issue of the Florida Bar Journal.

Some cities and counties in Florida delayed authorization for PACE, pending the court rulings.

Brandsmart USA, a chain of consumer electronics and appliance stores based in Hollywood, Florida has become the biggest commercial user of PACE funds in the state so far, with projects totaling $5 million. It’s mobilized the financing for new air-conditioning, lighting, roofing and other improvements at several stores in what executive vice president Larry Siniwitz calls “a phenomenal program.”

Brandsmart already is “cash-positive” on PACE at its south Miami-Dade store after the first year, saving about 10 percent more on energy bills and maintenance than it costs to back the money – and all without paying a dime upfront, Siniwetz said. It works through a services contractor, ABM, who handles all the property improvements and also guarantees that the savings from the improvements will be enough to repay PACE, he said.

Some local governments in Florida also had concerns beyond the bankers’ and legal challenges.

South Florida’s Broward County, home to Fort Lauderdale, was worried about protections for consumers and for local governments themselves, said Alan J. Cohen, assistant to the county administrator. The county wanted to make sure that consumers knew that PACE may not pay for itself and could cost them money out of pocket. Plus, the government wanted to find a way to protect cities and the county from lawsuits, if borrowers filed suits against contractors or lenders on PACE projects, Cohen said.

To address those issues, Broward now is putting safeguards in its PACE authorization. First, it is requiring PACE providers agree to cover any costs in the event of a lawsuit related to their projects. Next, it is limiting payments for annual taxes and assessments including PACE to 5 percent of the fair market value of properties – a step taken in other jurisdictions.

In a unique move, Broward also is asking participants to affirm one of three other things when using PACE: Either that the mortgage lender or servicer consents to escrow the PACE assessment; that energy or insurance savings can cover the cost of the PACE assessment; or that the PACE repayment won’t exceed 4 percent of their gross income. The county came up with that income standard because of concern over low-income senior citizens being targeted for financial products, Cohen said.

“Consumer protections by far are the most important aspect of what we are moving forward with,” Cohen said of PACE.

Unlike some other states, PACE programs in Florida are not run by governments but rather by third-parties such as Ygrene and Renew Financial. Programs typically involve a district that cities and counties can join. The trend now is for local governments to sign up with multiple providers, so that the programs compete.

Not much PACE funding for solar so far

By volume, competition will be largely for residential financing.

At Ygrene, about 99 percent of PACE contracts in Florida so far are for homes and then mainly for hurricane-related protection such as impact windows and new roofs, said Spector. Those upgrades cut insurance premiums. Thicker windows, often with tinted film, also help trim energy costs by keeping out more sun. So far, Solar accounts for only about 6 percent of the PACE funding in Florida, Spector added.

“We recommend property owners secure the building envelope first” with impact windows, roofs and other improvements, said Spector. If people want solar panels later, they can opt for a smaller installation to meet lower energy needs.

Rivals also will compete on terms for funding. Ygrene now offers financing for terms of 5, 10, 15 or 20 years with rates ranging about 6.5 percent to 7.4 percent linked to indexes, Spector said. The average amount financed now runs about $22,500, he said.

But the biggest difference between programs, industry leaders agree, will be how they treat consumers and contractors.

At Ygrene, Spector said staff is trained to describe PACE to consumers in detail. Some people call in and think because PACE is government authorized, it’s free. “You have to explain that it’s like going to a bank. You have to qualify first, and you have to pay it off,” he said. To protect customers, Ygrene also won’t pay contractors until an inspection is complete or the borrower has signed off on the project, added Spector.

The competition is expected to grow as Renew Financial and Renovate America get active in the state. Over time, predicts Spector, “You’re looking at a PACE industry that could potentially be at half a billion dollars in financing per year in Florida.”

Doreen Hemlock writes on energy, business, travel and other topics. She’s worked on staff at newspapers in the U.S. Virgin Islands, Peru, Venezuela, Puerto Rico and South Florida and contributed to publications worldwide. She holds an MBA from Columbia University and lives in Miami Beach.