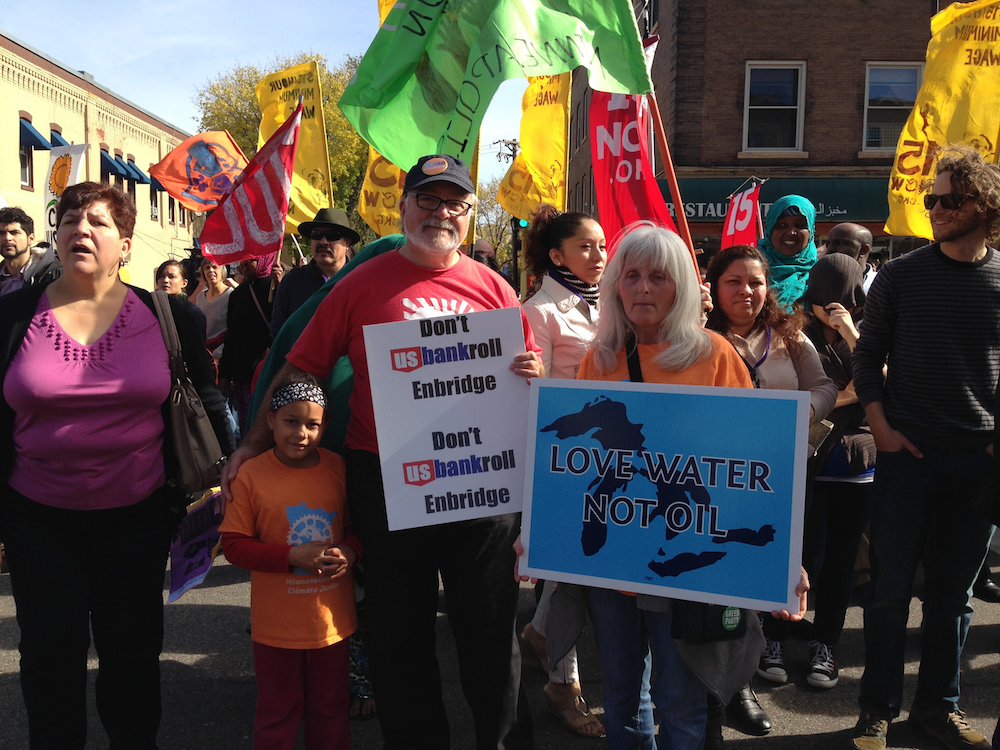 Two bank officials have been meeting with MN350 members for the past several months on a new environmental policy that would discourage lending to fossil fuel interests. Advocates say the policy move — which they add could be stronger — is important because U.S. Bancorp (the parent company of U.S. Bank) is one of the largest financial services companies in the United States.

MN350 is a member of RE-AMP, which publishes Midwest Energy News.

A spinoff of 350.org, MN350 had been meeting with bank officials along with the groups Minnesotans For A Fair Economy and Cooperative Energy Futures.

MN350 previously called for customers to leave the bank unless it made significant moves to eventually eliminate financial support for the fossil fuels industry.

The rest of the document called for greater internal and external oversight of all matters related to the environment.

“The policy change was something that surprised me,” said Ulla Nilsen, MN350’s corporate accountability organizer. “We were all pleasantly surprised by the policy, especially after the bank’s tone in first meetings.”

After an initial “cold shoulder” attitude toward MN350 and other coalition members, Nilsen said the bank’s representatives began to seriously consider new policies.

She added that other banks have taken the same measures, including Wells Fargo (which has significant operations in Minneapolis), Bank of America, Citi and JP Morgan Chase.

While the decline in the coal industry and the rise of renewable energy and natural gas may have helped shape those new policies, they still represent progress, Nilsen said.

In fact, the bank’s environmental policy points out that the corporation invested $2 billion in clean energy projects in 2015.

Additionally, the bank’s commitment to not finance forestry, mining and pipeline operations on tribal land without first hearing from indigenous communities may even end up preventing pipelines in those areas because companies couldn’t get financing from major banks, Nilsen said.

However, U.S. Bancorp’s new policy still falls short of what MN350 prefers, which is an end to financing the extraction and transportation of tar sands oil as well as the fracking industry.

“That’s important, and we asked them to include it,” she said, in reference to the clause on indigenous populations. “But we don’t feel like they entirely got that.”

MN350 released a report last October that outlined U.S. Bancorp’s role in financing pipeline projects in Minnesota, many of which run through or near tribal lands. The report also detailed financing by U.S. Bank and Wells Fargo of strip mining, fracking and oil and gas interests.

The bank’s environmental policy calls out restrictions in several areas:

The group would like to see the bank support growing efforts for on-bill financing for customers who subscribe to community solar to support “clean power and save money,” Nilsen said. “On-bill repayment is a low risk investment because people always pay their utility bills.”

Talks between the bank and MN350 continue.