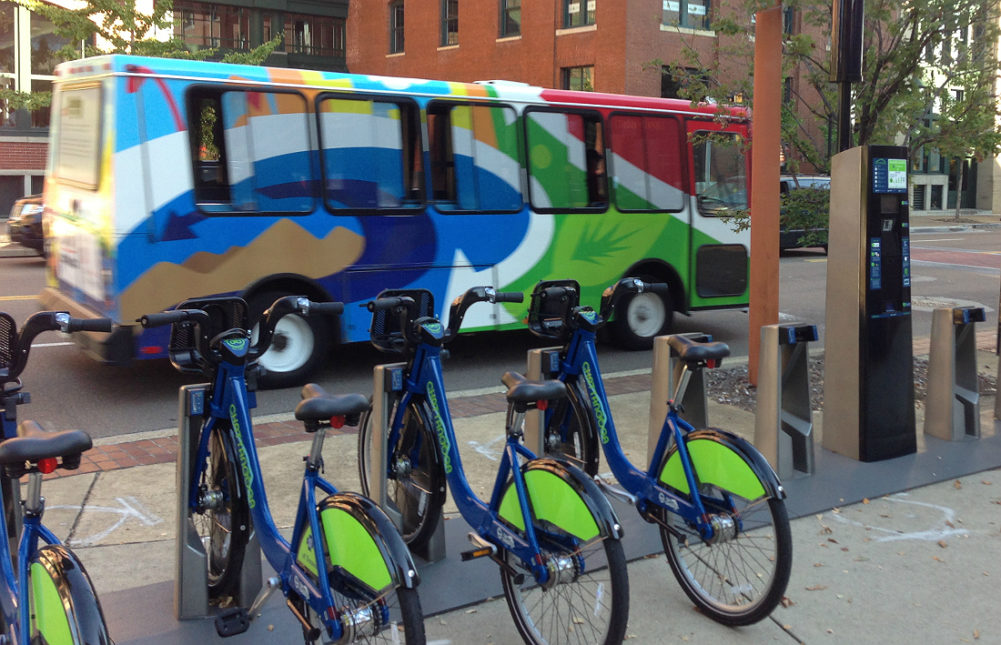 Today, the mid-sized city nestled at the foot of the Appalachian mountains is known as “gig city” for its lightning fast fiberoptic network, and this year was rated number one among mid-size cities in innovation economy by the National League of Cities.

Through private and public initiatives, including both state and federal funding, it has also become a national leader in the transition to clean transportation – with an electric bus, bike-sharing and a soon-to-launch electric car sharing service. In 2015, the city was ranked 12th among the top 15 metro areas seeing the most improvement in air quality—with 66 percent of days having good air quality in 2014.

Electric bus as a catalyst

The transition began 26 years ago, when the Chattanooga Area Regional Transportation Authority (CARTA) began operating an emission-free electric shuttle bus service in the polluted downtown area, which was undergoing revitalization. The shuttle costs nothing to residents to ride. Funding from the Federal Transit Administration ($15.7 million), Tennessee Valley Authority ($2 million), and Tennessee Department of Transportation ($2 million) covered the initial startup costs.

“That electric shuttle bus now has a million passengers a year,” says Scott Allen Fiedler of the Tennessee Valley Authority (TVA). “It is popular with tourists and residents alike. It has been a driving force in the transformation in Chattanooga transportation for a quarter century.”

Later this summer, Chattanooga will be launching an electric car sharing program, one of the first of its kind in the country (a similar program operates in Indianapolis). Any resident of the city with a clean driving record, a credit card and a smartphone can pay a $25 application fee to become a member of the program and then rent a Nissan Leaf for $9 an hour. CARTA received a $3 million grant from the TVA to expand into the car-sharing service.

The city turned to Green Commuter, a Los Angeles-based firm, to provide 20 Nissan Leafs that will be parked at 20 new charging stations at locations downtown, at two shopping malls and at the city’s airport. Most locations will have several charging spots, for a total of 50.

“The program is inspired by both our electric shuttle and our successful Bike Chattanooga bike-sharing program,” says Andrew Griffin Frye, a power utilization engineer at TVA. The bike-share, which was launched in 2012 as the largest program of its kind in the Southeast, features 33 stations and 300 bicycles, available to rent year-round with the swipe of a credit card.

“While not all Bike Chattanooga trips are a direct replacement for a motor vehicle trip,” says Philip Pugliese, President of Prova Group LLC, a transportation consulting service, “the potential exists for savings of over 300,000 pounds of CO2 emissions thus far.”

Bike Chattanooga is now offering an app for smartphones which will allow users to download a ride code, and just received grant funding to launch four new stations and double the size of their busiest station, says William Copeland, Director of Business Intelligence at EPB Strategic Research. The program already offered 1,000 annual memberships to locals for $5, which sold out in a week, and is now offering additional $5 memberships to underserved neighborhoods, in a program similar to Detroit’s Slow Roll.

“I can’t start to list all the calls from communities across the country and even overseas about how ‘small Chattanooga’ launched and continues to grow Bike Chattanooga,” says Ben Taylor with the Chattanooga Department of Transportation (CDOT), which owns and operates Bike Chattanooga.

By adding electric car-sharing the city will create a mutually sustaining network between traditional transit, electric shuttle, and bike share. According to Ben Taylor of the Chattanooga Department of Transportation (CDOT), memberships to bike and car share will ultimately be linked, so residents can “bike share for their short trips and use the car share in bad weather or for longer trips. We’re looking now for the best location to place a car share system with a bike share station to help the public visualize how these systems (plus mass transit) can meet their transportation needs.”

While the TVA still gets 44 percent of its generation from fossil fuels, the electricity for the car-sharing program will be offset by three solar generation sites that are currently being installed.

“We have sized those three solar sites so they generate enough electricity through the year to offset the power demands of 300,000 electric vehicle miles,” says Frye.

The city will also initially offer free charging to the public of their personally owned electric or hybrid vehicles.

Currently, says Copeland, the city is working with Oak Ridge National Laboratory on secondary use of the electric vehicle batteries after their rating falls. “There are high tolerance specifications for how a battery must perform in a vehicle,” he says. “That battery still has useful life left in it, and can be repackaged into a grid storage device.”

The TVA’s interest in the project, Frye says, is part of the agency’s legacy of helping develop the region technologically.

“TVA believes electric transportation will play a significant role for Valley consumers in the future,” says Frye. “Residents here are very interested in sustainable options for energy that lessen the impact on the environment. I think that’s part of the outdoor enthusiast culture here. We are a very popular recreational area nationally.”

In April 2011, TVA entered clean air agreements with the Environmental Protection Agency, four states and three environmental groups, resulting not only in the electric car-sharing program, but other projects centered sustainability and clean energy.

‘Not bad for a red state’

Chattanooga, and Tennessee in general, are known for being fiscally conservative.

“Our Tennessee Department of Transportation is one of only five state transportation agencies that has zero debt,” says Pugliese. “In 2010, I was local host director for the national ProWalk/ProBike conference, one of the largest bicycle/pedestrian planning events in the country. I suggested that we use the tagline for the event ‘Not bad for a red state,’ as prior conference site hosts were Madison, Wisconsin, and Seattle, Washington.”

“I tend to be a fiscal conservative and generally respect this process,” says Pugliese. “But I believe these investments in transportation have a huge return on investment in terms of promoting freedom of choice, mobility, healthy living, and overall quality of life.

“We’ve gone from being called the dirtiest and least inviting city in the nation to now being ranked one of the best places to live in America. We are working hard to transform transportation choice in the city.”

Editor’s note: This story has been updated to provide more precise information on TVA’s fuel mix and to remove mention of the EPA, which wasn’t founded until 1970.