Photo By
Courtesy of republicEn 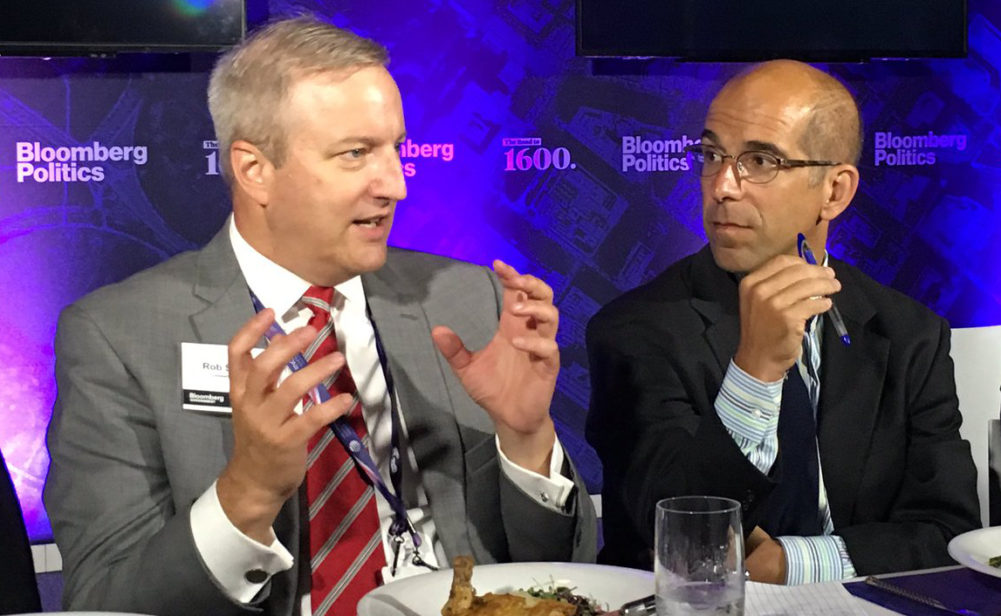 Rob Sisson of ConservAmerica, left, discusses conservative approaches to clean energy at an event in conjunction with the Republican National Convention in Cleveland.

Growing numbers of conservative voters agree the U.S. needs more clean energy, reported members of organizations at this week’s Republican National Convention in Cleveland. However, there’s little agreement on how government policies should pursue that goal.

Conservative interest in encouraging clean energy reflects voters’ growing concern about climate change, said Alicia Kolar Prevost of Defend Our Future. The organization partnered with Bloomberg Government to host a roundtable luncheon on Monday about the future of climate change conversations within the Republican Party.

A majority of Republicans — 56 percent — agree climate change is happening, according to a recent Yale/George Mason University survey referenced by Prevost. Supporters of presidential hopefuls still in the major party races at the time were more likely to vote for a candidate who supports taking action to reduce global warming, the report found.

“The polling is going to be critical going forward to show candidates that they need to come along,” said Rob Sisson, president of ConservAmerica.

While conservative Republicans may not agree with Democrats’ policies, they share a range of concerns about climate change.

“First and foremost, it’s a moral issue,” said Rachel Lamb of Young Evangelicals for Climate Action. As she sees it, climate change is “negatively impacting people, as well as the environment, which we’re called to take care of by God.”

“God has given us a commandment to take care of our planet,” agreed Ash Mason of the Christian Coalition, referring to a passage in the book of Genesis.

“Clean tech is a pro-life issue,” Sisson added, noting that pollution from fossil fuel plants includes mercury, which can harm the brain and nervous system in developing children. A 2012 study found that 8 percent of newborns in the region near Lake Superior had unacceptable levels of mercury in their blood.

“You can’t take hunters and anglers for granted,” he said.

Cade Marsh of the College Republican National Committee noted that his home state of Florida has huge potential for solar energy. Yet the state is among the weakest on solar policy, including an effective ban on third-party financing for rooftop solar energy.

“We’ve been stonewalled by big money interests in the state,” Marsh said. As he sees it, conservatives are not against clean energy, “we’re just pro not being told what we have to do.”

“More people will be prosperous,” Hayworth added, noting the potential for jobs as the clean energy industry grows.

Clean energy is not just a domestic issue, said Jay Lifton of Cella Energy, a hydrogen storage company. “It’s an international issue” that affects the United States’ ability to compete worldwide, he said. “China is more into this than the U.S.”

Right now, liberals control the agenda on climate change and clean energy, said Alex Bozmoski of republicEn, a community of “climate change realists” facilitated by the Energy and Enterprise Initiative at George Mason University. “We’re letting America down when we’re not competing and offering solutions.”

Most organization representatives at the Defend Our Future/Bloomberg event favor using tax incentives to spark investments in clean energy, such as the recently-extended Investment Tax Credit.

But, Lifton said, some conservatives might hear talk about climate change and immediately worry that the next step would be a carbon tax.

“Which would be awesome,” in Bozmoski’s personal view. He did not believe Republican voters as a whole would accept a carbon tax, however.

Proponents of a carbon tax see it as a way to make the fossil fuel industry pay for environmental damage and other social costs caused by pollution. In economic terms, a carbon tax can also promote a “level playing field” for all forms of energy.

Others, including Garcia, favored removing subsidies and tax breaks for fossil fuels.

“We don’t like mandates,” Mason said. However, he said, a portfolio standard could be a good policy option if a state chose it and it allowed the state to determine the most effective combination of renewable energy and efficiency.

A federal program setting clean energy targets could also provide incentives for meeting those targets early. As Mason sees it, such rewards could promote a “race to the top” in clean energy.

According to that document, “The Democratic Party does not understand that coal is an abundant, clean, affordable, reliable domestic energy resource.”

Speakers echoed that sentiment Monday night at an event hosted by the Young Conservatives for Energy Reform and the Christian Coalition.

“We’ve got some of the largest reserves of oil and gas in the world. We’ve got coal fields,” said Congressman Bill Johnson (R-Ohio).

Nonetheless, conservatives should make sure that the Republican Party’s “all-of-the-above” policy really works towards that goal, said Keith den Hollander of the Christian Coalition. “We need to look at new energy resources.”

And even if a majority of the Republican Party does not yet accept the need for cleaner energy, the party leadership will eventually listen if concerned conservatives speak out, Bozmoski said at the Defend Our Future/Bloomberg event earlier that day.

“Small groups of really committed eco-rights can make a difference,” he said.