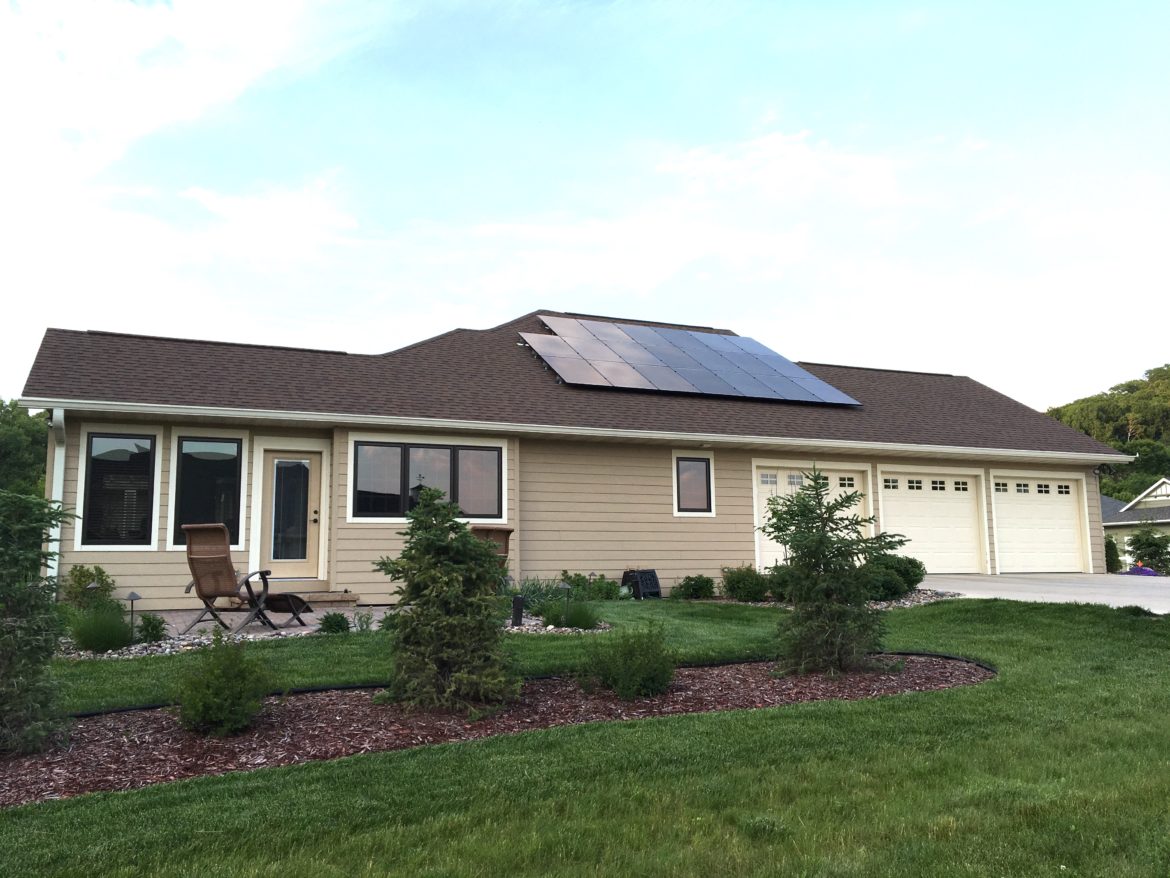 Dr. Charles Schauberger installed solar panels on his Wisconsin home with the help of the Solar.Clinic program.

As health care providers seek to expand clean energy, a West Virginia company is helping them overcome the space limitations of their campuses.

Energy consumption by healthcare networks is immense, says David Levine, CEO of Geostellar. Most hospitals consume 2.5 times the energy of a typical office building. Healthcare facilities generally are responsible for about 9 percent of U.S. greenhouse gas emissions and 10 percent of the pollution particulates that cause asthma and other pulmonary diseases, he says.

However, because many hospitals are vertically built, it can be difficult for them to install sufficient solar panels to make a dent in their fossil fuel consumption, Levine says.

“Just having the hospitals go solar isn’t really going to do much,” he says. “There is just not enough land, it’s not that practical.” That is why it makes sense for hospitals to recruit employees to help execute on their green-energy agendas, he says.

Levine’s company is coordinating and marketing the program for business partners Health Care Without Harm and Practice Greenhealth. He says that Solar.Clinic allows hospitals to offer discounts to employees interested in installing solar panels on their homes. It is similar to a program Geostellar started in 2014 with five Fortune 500 companies to offer employees solar incentives.

Under the program, Geostellar offers free light detection and ranging (LIDAR)-based survey data to homeowners, who can access that information through their computers and learn what types of solar systems would best work on their properties. They can also discover how much shade and sunlight the property is exposed to and the tilt angle their roof. Geostellar also provides electricity consumption data for the property.

After making its recommendations for the best system to buy, the company then arranges for local contractors to arrive at the home to install the equipment, Levine says. Depending on what system they choose, hospital employees receive special promotion codes that can save them between $500 and $1,500 on solar installations, Levine says.

A fourth healthcare system, Appleton, Wisconsin-based ThedaCare Healthcare Providers, also is taking part, but it is taking the program in a slightly different direction. Rather than provide employee incentives, it has signed on for solar installations at about 20 of its 40 affiliated clinics, Levine said.

What’s in it for hospitals

The Cleveland Clinic’s program is just getting started, Levine says. However, Gundersen Health System—which serves parts of  western Wisconsin, northeastern Iowa and southeastern Minnesota—launched its program about a year ago and employees have enthusiastically embraced it, he says.

So far, some 53 Gundersen hospital staffers have signed on and either installed solar panels or started the process, according to Levine. Gundersen Senior Business Services Vice President Mark Platt used the program to install solar on his home in April. Gundersen obstetrician Chuck Schauberger flipped the switch on his system this month.

Schauberger says he has always been environmentally conscious—he started recycling newspapers around the time of the original 1970 Earth Day observance. But has a more pragmatic reason for going solar. He figures his solar system will supply about 40 percent of energy to his home and reduce his long-term electricity bills just as he is entering retirement. He figures his home’s solar array will pay for itself within eight years.

Responding to questions by email, Jon Utech, the Cleveland Clinic’s Office for a Healthy Environment senior director, acknowledges that the Solar.Clinic program offers no direct financial incentive to the hospital. But assisting staff members—he calls them “EcoCaregivers”—keeps with the clinic’s green-energy push.

The clinic has committed to 20 percent energy use reduction over the next 10 years, he adds.

Taking part in the Solar.Clinic initiative, Utech says, is a way to inspire Cleveland’s caregivers to improve their environmental footprint. “What is good for our own operations and our caregivers is good for the community,” he says.

Eric Lerner is director for climate and health for Reston, Virginia-based Health Care Without Harm, a partner in the Solar.Clinic initiative. He says that hospitals could leverage Solar.Clinic to meet their regulatory “community benefit” requirements.

In lieu of paying taxes, he notes, nonprofit hospitals are required to put resources back into their communities to address local health priorities.

“Hospitals could also potentially use community benefit dollars to invest in community solar, to provide clean energy for at risk communities,” he says.

At Gundersen, however, meeting regulatory requirements was not a reason for participating in Solar.Clinic, according to Alan Eber. Gundersen’s engineering and energy manager says his hospital administrators simply saw Solar.Clinic initiative as a way to push its green-energy agenda.

Gundersen began its Envision clean-energy program back in 2008, and already has several small solar installations installed at its main campus. “This was an opportunity to get outside of our walls and have some of our staff help us along this journey,” Eber says. “It was a natural course for us.”

Eber is confident that Solar.Clinic program, or other similar programs, will gradually take root at hospital networks across the country.

“The cost of healthcare is so high that anything we can do to reduce that cost is a step towards goodness,” Eber adds. “This will help reduce the cost of healthcare, and it will also help improve the health of the air that we all have to breathe. So I do think that other healthcare organizations will get on board. It really fits into the mission of most healthcare systems.”

Editor’s note: A version of this story also appears on Midwest Energy News.