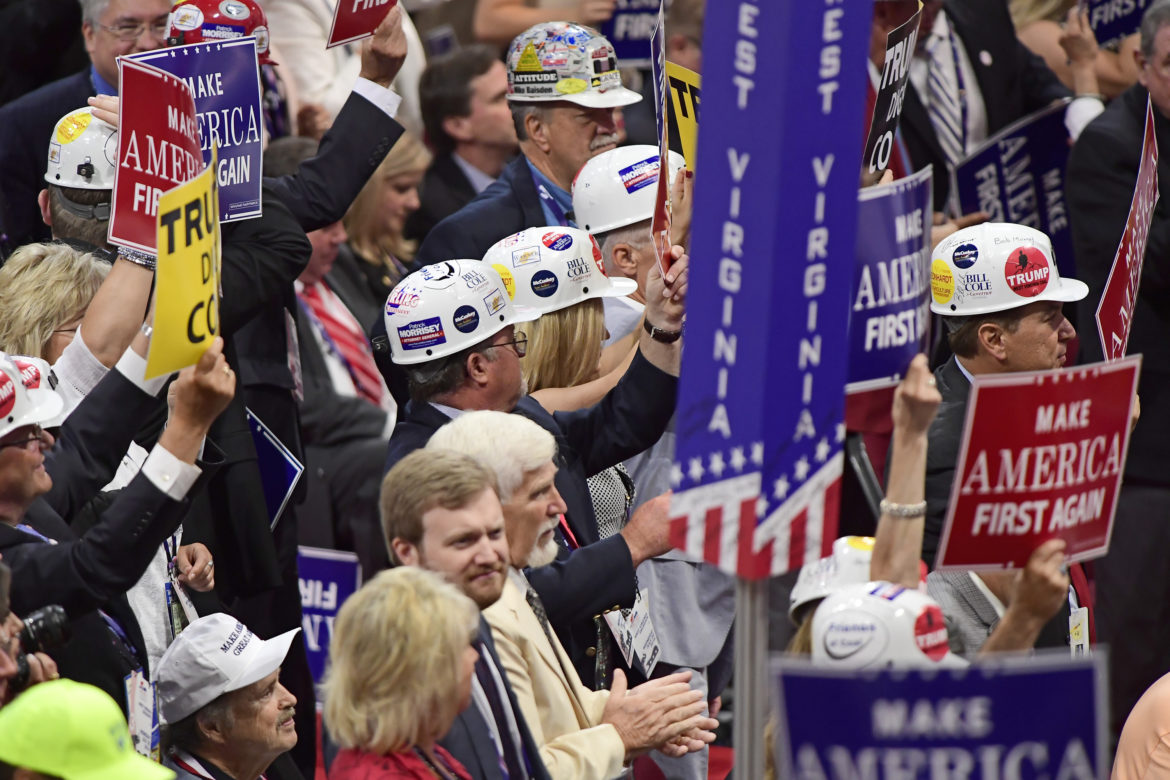 With Ohio shaping up to once again be a battleground state for this year’s presidential election, contrasts on energy and climate policy could affect whether Democrats or Republicans win the state’s 18 votes in the Electoral College.

And while Republican nominee Donald Trump’s promises to revive the state’s coal industry may resonate with some voters, the party’s continued denial of climate science appears to be a growing political liability.

“Most people believe that climate change is happening,” Mercury political strategist Jai Chabria said at a panel in Cleveland last month, hosted during the Republican National Convention by Politico and sponsored by Vote4Energy, a project of the American Petroleum Institute. Chabria previously served as an advisor to Ohio Gov. John Kasich and helped launch his bid for the Republican nomination.

Not only does a nationwide majority accept that climate change is happening, but so do 70 percent of Ohioans, according to a 2013 report from the Yale Program on Climate Change Communication.

Moreover, survey results released by NextGen Climate earlier this year show that 83 percent of Ohioans favor a goal of 50 percent clean energy by 2030.

“The millennial generation firmly believes that there is climate change,” Chabria said. “We have to accept those realities in the party.”

However, a recent Gallup poll found that the economy is a high priority among nearly all voters of both parties, while climate change remains low, especially for Republicans.

‘Behind the eight ball?’

The Republican platform adopted in Cleveland last month advocates an “all-of-the-above” strategy that strongly favors development of coal and fossil fuels. At the same time, the party rejects the principles of the Paris Agreement and the earlier Kyoto Protocol on climate change.

The party also characterizes the Intergovernmental Panel on Climate Change as “a political mechanism, not an unbiased scientific institution. Its unreliability is reflected in its intolerance toward scientists and others who dissent from its orthodoxy.”

In scientific papers that take a position on whether human activities are causing climate change, however, 97 percent agree that is indeed what is happening, according to a report in Environmental Research Letters.

Perhaps more importantly, 56 percent of registered voters believe human activities are the main cause of global warming, according to a recent Yale/George Mason University survey. Another 4 percent in that survey believe that natural changes and human activities both play a role.

“I think it gets us behind the eight ball when we don’t actually have that real conversation” about climate change, Chabria observed.

As for Republican nominee Donald Trump having called climate change a hoax, Chabria said, “I think that’s a problem.”

At the state level, Chabria acknowledged Kasich’s strong support for the state’s coal and natural gas industries. Nonetheless, Chabria said, Kasich has “also tried to make sure that renewables are a part of this conversation too.”

“There’s been a move in the legislature to strip away the standards” for renewable energy and energy efficiency, he continued. But, he said, Kasich’s position is that “there should be standards.”

At the same time, Chabria and other Republicans on the panel supported continued development of fossil fuels, including both coal and petroleum.

“The goal of the Trump administration would be first of all to stop the bleeding” in the U.S. coal industry, said Kevin Cramer, a congressional representative from North Dakota who advises Donald Trump on energy issues.

Even Jay Faison at the ClearPath Foundation, which calls for reducing carbon emissions, said “coal is going to be part of the situation.”

“I don’t think calling coal ‘clean’ without explaining is a great political move,” Faison noted. Yet he thinks clean coal could be possible. “We think innovation is the way out of the box and we think America is going to lead that innovation.”

In contrast, the Democratic Party platform adopted last week calls climate change an urgent threat and sets a goal of producing half of the country’s electricity from clean energy sources within the next decade.

“Democrats believe that climate change poses a real and urgent threat to our economy, our national security, and our children’s health and futures, and that Americans deserve the jobs and security that come from becoming the clean energy superpower of the 21st century,” said the platform.

At the same time, the platform pledges support for “the coal communities who kept America’s lights on for generations” and promises new investments for energy-producing communities.

However, it’s not clear how that general promise will play in areas that historically have depended on the coal or petroleum industries.

“Coal is critical in the state of Ohio,” stressed Chabria. “In southeast Ohio, when we’re just talking politically, it’s a real hot-button issue down there. And there’s a real belief that the Clinton administration is going to kill coal.”

That’s a big issue in Monroe County where the unemployment rate in June was above 10 percent. Six other counties in southern and eastern Ohio had unemployment rates above 7.2 percent that month. The statewide average for June was 5.1 percent.

Ohio-based Murray Energy is also wary, and its CEO has thrown his support behind Donald Trump, reported company spokesperson Gary Broadbent in an email statement.

“Mr. Murray fully supports Mr. Trump for President over Hillary Clinton, who has said that, if elected President, she is ‘gonna put a lot of coal miners and coal companies outta business,’” Broadbent said. “Mr. Murray believes that Mr. Trump is totally committed to the survival of the United States coal industry and to the jobs, livelihoods, and families in it.”

Some Democrats are trying to dispel the view of Republicans as the savior of the coal industry. For example, one press release by Ted Strickland’s campaign to unseat Sen. Rob Portman (R-Ohio) cited instances in which it claimed the incumbent had voted against the interests of coal workers in Appalachia.

Meanwhile some conservative Republicans stress the economic benefits of clean energy, including Nan Hayworth, a former Republican member of Congress from New York state and director of ConservAmerica.

Moreover, denying climate change is not the way to save the coal industry, according to Alex Bozmoski of republicEn, who spoke at another panel in Cleveland last month, which was hosted by Bloomberg Government and Defend Our Future.

“If we want to save… coal miners as opposed to… solar industry workers, we’ve got to figure out a way they can compete in the market and not try to figure out a way for the government  to subsidize the industry because it’s an identity politics play — because somehow we identify with coal as an American energy source when we have way more people that are building our turbines and our solar panels,” Bozmoski said. As of 2014, about 75,000 people were employed at U.S. coal mines, according to the Energy Information Administration. Data from the Solar Foundation show that the U.S. solar industry supported more than 208,000 jobs, of which 188,000 were totally focused on solar activities.

In any case, the Republican Party’s position on climate change could be problematic at the ballot box, said Faison. Although climate change isn’t a top priority for most voters, he said, it ranks high among swing voters.

“Clean energy is the Number One peel-away issue,” he said, meaning that it ranks above immigration, the economy or other issues as a subject that could turn voters away from how they might otherwise cast their ballot. “They really don’t trust our party.”

Meanwhile, the Clinton campaign has cast voting for Clinton as a vote to save the planet.

In Chabria’s view, the Republican Party has “to come up with solutions” on climate change. “We can’t be the party where nothing gets done,” he said.