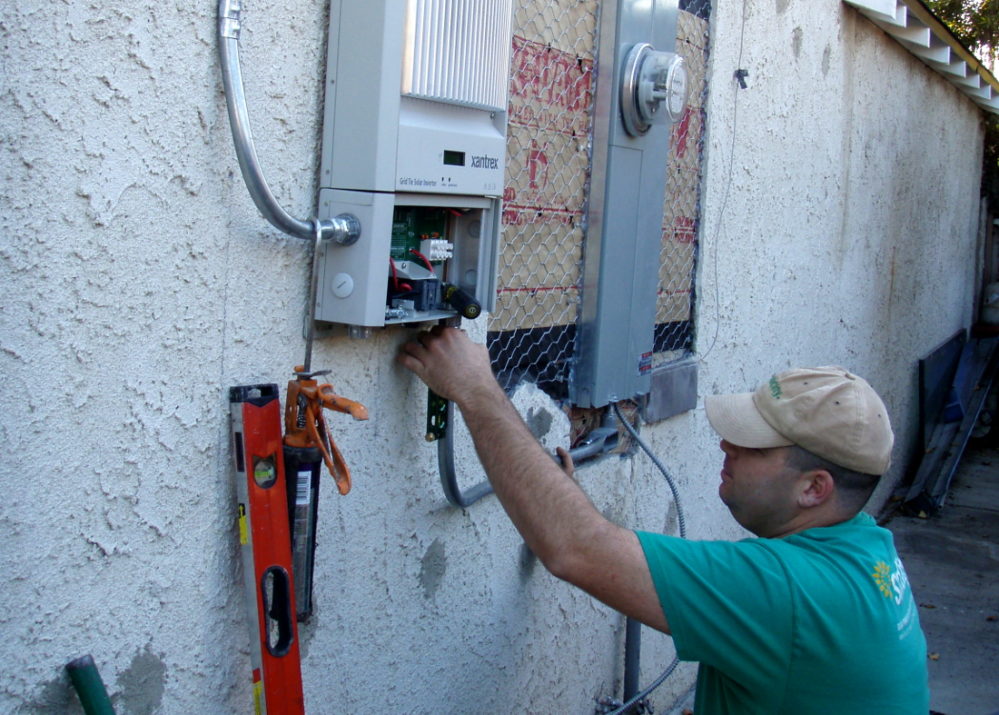 A worker installs an inverter on a solar project in Lakewood, California. Many inverters already have "smart" functionality installed but switched off by default.

Advanced inverters, or smart inverters, are sophisticated versions of the devices long used to convert the direct current output of solar panels into the alternating current used by consumers across the electrical grid. Whereas traditional inverters are programmed to shut off during disturbances on the electrical grid, advanced inverters can continue to operate and even assist in smoothing out an increasingly variable grid.

Only a handful of U.S. states make significant use of this emerging technology, but that’s changing as electricity standards and procedures are updated to reflect a modernizing industry. In Illinois, ComEd plans to test smart inverter functionalities as part of a microgrid pilot project on Chicago’s South Side. In January, the utility received a $4 million grant from the Department of Energy (DOE) toward utilizing smart inverters in the so-called “Microgrid-Integrated Solar-Storage Technology” project.

The project will address “one of the key barriers for the high penetration of solar PV systems: the seamless integration of these systems in utility grids,” reads a release on DOE’s website.

Additionally, as part of the company’s Next Generation Energy Plan, ComEd proposed a smart-inverter rebate of $1,000 per kilowatt of generating capacity for residential customers and $500 per kilowatt for commercial and industrial users. The plan, part of broader legislation which faced opposition for its continued financial support for struggling nuclear plants, stalled in the Illinois Senate.

Across the US, widespread use of advanced inverters could more than double solar capacity from about 170 gigawatts (GW) to 350 GW, according to a report released in May by the Department of Energy.

It’s why experts view advanced inverters as a key lynchpin in the suite of technologies needed to accelerate deployment of renewable energy and build a smarter, more flexible grid for the 21st century.

“[Advanced inverters help] make these resources – solar, storage – full-fledged providers of energy services to the grid, instead of … just participating, but not necessarily providing, all these things that are needed,” says Bryan Palmintier, one of the authors of the Department of Energy report and a senior engineer at the National Renewable Energy Laboratory in Golden, Colorado. “While maintaining a reliable energy system, we can have much higher penetrations of these types of technologies.”

A workhorse for the grid

Between 2010 and the first half of 2015, U.S. solar connected to the distribution system (lower-voltage transmission lines that deliver electricity to the end-user) grew from a capacity of 1.8 GW to 11 GW, according to the Department of Energy. That rapid sixfold increase in distributed generation is a tall order for an electric grid that has operated as a one-way street for roughly a century.

Traditional inverters have helped manage this change by converting solar energy into the kind of electricity used on the grid, and by shutting off when there’s a potentially unsafe change in system-wide voltage or frequency. That kind of basic functionality is sufficient for low levels of solar but higher penetrations could pose technical problems.

On a more macroscopic level, McClurg and others note, smart inverters can help the grid balance the fluctuating quantity and quality of power that comes with increased intermittent resources like solar and wind. Merely shutting solar panels off when the grid destabilizes (for example, when a centralized power plant goes offline) can cause even more headaches by depriving the system of supply. Advanced inverters offer functions that allow solar panels to continue operating and make adjustments to help balance the grid.

“The grid is now much more dynamic,” McClurg says. “It’s having to respond to all these distributed resources that are changing based on wind and sun. So now these smart inverters not only have to be able to deal with sending power to multiple places, but they also have to be able to be smart enough to figure out how to help the grid manage all these fluctuations in power.”

Perhaps surprisingly, many of these advanced features are already installed in inverters around the country, but they are disabled by default. The reason, experts say, is that established technical standards and codes have long required that distributed resources trip offline during grid disturbances. Those standards take time to catch up with evolving technology, but there are signs that these codes are becoming more flexible.

In 2014, for example, the Institute of Electrical and Electronics Engineers 1547 Standard for Interconnecting Distributed Resources with Electric Power Systems (IEEE 1547) was amended to allow utilities to require that distributed energy resources regulate voltage or ride through grid disturbances. A full revision of that standard is underway, but the timeline of that revision is unclear.

In most jurisdictions, another important safety standard, Underwriters Laboratories Standard 1741 (UL 1741), is required for inverters to connect to the grid. UL 1741 is based on IEEE 1547, so it too is undergoing a full revision. In the meantime, renewable-friendly states like California and Hawaii have introduced their own rules encouraging utilities to implement and experiment with advanced inverter technologies.

“It’s really just a software change in the controls and the technology is out there today, literally asleep on the shelf, and, in many cases, even installed in people’s’ houses,” Palmintier says. “It’s just turned off because of the grid interconnection rules in the US that have recently allowed these capabilities to be used and previously didn’t.”

This reporting was made possible by a grant from the Illinois Science & Energy Innovation Foundation.

David Unger is a Chicago-based journalist whose work has appeared in the Christian Science Monitor, InsideClimate News, and other outlets.