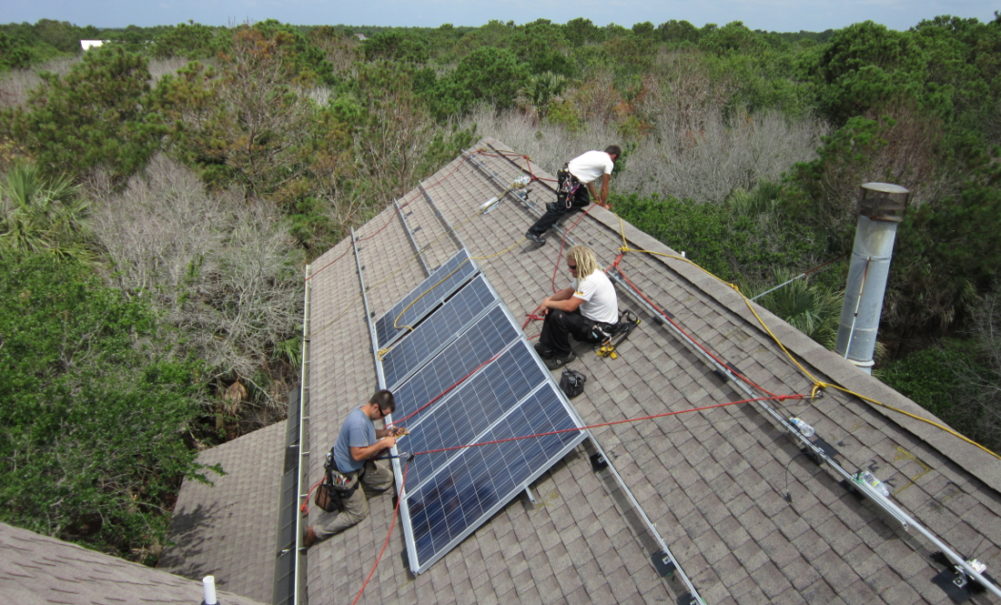 Crews install a 7 kW solar array in the Lowcountry of South Carolina.

Earlier this month, residential solar provider Sunrun, headquartered in San Francisco, hosted a gathering of South Carolina Republicans to talk about clean energy. The company was celebrating strides in renewable and solar energy in the state.

Sunrun now employs 150 employees in South Carolina, up from a single employee last year. And of particular interest at the meeting was a March poll by Public Opinion Strategies showing that one quarter of independent voters in key swing states would be more likely to vote for a Republican candidate who vocally supported solar energy.

One of the roundtable attendees was state Sen. Chauncey “Greg” Gregory, who has sponsored significant legislation in the state to support solar power. A few years ago, Gregory visited his sister in Portland, Oregon, and saw solar panels on hundreds of rooftops.

“It seemed ridiculous to me that a state that is cloudy 8 months a year had so much solar energy,” he says, “while South Carolina had so little.”

He decided to try and change that. The state’s sunny neighbors—Georgia and North Carolina—were making big strides in solar. But as recently as 2012, South Carolina lagged at the bottom of the list, with complicated laws, resistance from power companies, and poor tax incentives for solar energy. Today the state currently has 7 megawatts of solar installed, but plans to go to 765 over the next five years, which will move its rank from 34th to 20th.

Sen. Gregory has represented the 16th District of South Carolina from 1992 through 2008, and again since 2011. He lives in Lancaster, and has been noted for his “good green deeds” by the Conservation Voters of South Carolina (CVSC), who wrote two years ago that he “sponsored our major solar bill last year and managed to get a compromise bill (S.1189) passed in record time at the end of the 2014 session.”

Southeast Energy News interviewed Sen. Gregory about the breakfast roundtable and the future for solar power in the state.

Southeast Energy News: Tell us about the meet-and-greet roundtable breakfast.

Gregory: It was an eclectic mix of about fifty people, including legislators, homeowners, and conservatives interested in the solar industry. Former Congressman Barry Goldwater Jr. spoke for about ten minutes. I met one newly elected senator from Greenville, South Carolina, which is a big hot spot for solar.

You were the one who sponsored that legislation, which was ultimately amended to S.1189. How did it come about and how easy was it to pass the bill?

It passed both houses unanimously in 2014, but that didn’t happen overnight. The gist of the bill was to provide net metering, where residential or business owners can sell extra solar energy back to the utilities. Another key point was a requirement that utilities invest in or acquire 2% of their average peak demand in solar power by 2021.

You can also lease solar panels now, just like you can a car, and still sell the excess electricity back to the utility company, mitigating the cost to you.

When we first sponsored the bill, the utility companies strongly opposed it. But then there was a sea change.

Why the sea change?

That’s a good question, and although nobody has a definitive answer, one influence was likely that Duke Energy went from being opposed to being one of the bill’s strongest supporters. We think they were getting pressure from stockholders. Most of the work done to craft the bill was done behind the scenes by the Coastal Conservation League, and by the electrical co-ops, which provide nonprofit electricity to rural areas in the state.

How did you bring those opposed to solar around to your view?

It took a lot of one-on-one conversations. In 2013 we were making very little progress, but in 2014, when Duke came around, we had the wind at our back. As with all legislation, you look to other states. That’s the great thing about having 50 states. They can be incubators for legislation of various sorts. So if states on our border—such as North Carolina or Georgia—are expanding their solar capacity, then we are seen as falling behind. That was really my main argument.

You tried to pass a second bill, but it hasn’t made it through the legislature yet.

I sponsored a bill this year to prevent property, or ad valorem, taxes on solar farms and residential and business solar. It passed the senate, and it almost passed the house with some amendments, but we were down to our last session of the year and we couldn’t get all the differences worked out. So we will introduce it for the coming session, in 2017-2018.

Is there still strong resistance from some individuals in the House?

Yes. They stripped out the tax for solar farms, but left it in for individuals and businesses. There are some people in the house who see tax rebates as an unnecessary subsidy for solar over other forms of power. I don’t think they really understand the strong interest from consumers and industry.

Renewable energy is something conservatives should be in favor of. It gives people freedom of choice for their energy source. But we still have some Rush Limbaugh listeners who categorically oppose any solar energy.

A lot of solar companies have moved into the state now.  This August, Blue Wave launched a solar loan program for both South and North Carolina. What do you see ahead for solar in South Carolina?

We may not be as far along as North Carolina or Georgia, but we’re in the game now. I’m encouraged by the momentum we have. I’m putting solar panels on my personal building supply business.