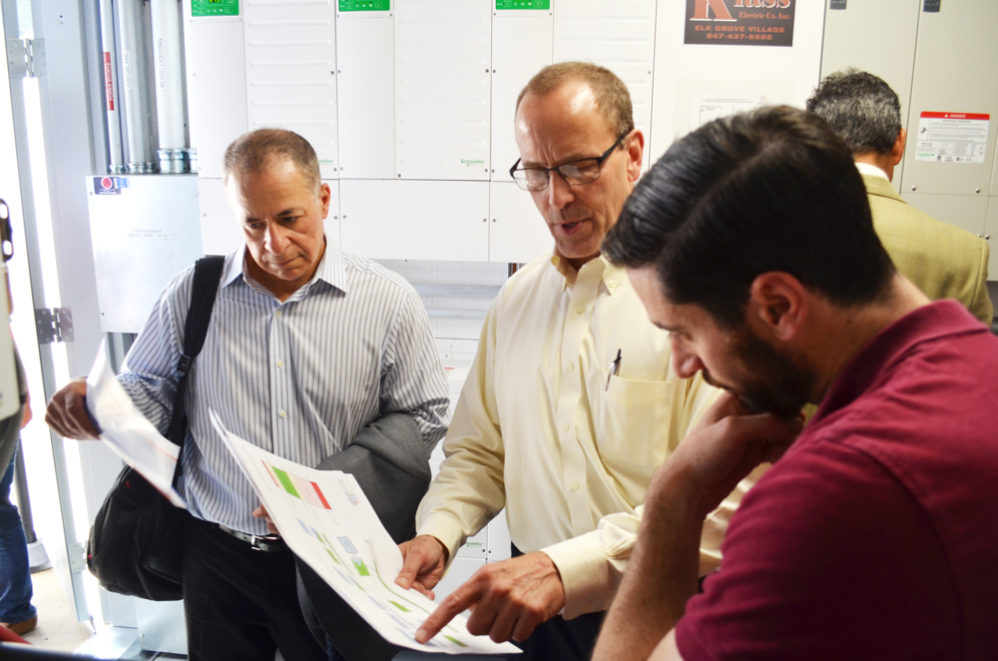 Marc Lopata, center, a project engineering manager from Azimuth Energy, studies a diagram of the Keating DC-AC Nanogrid Architecture at an event at IIT.

The Illinois Institute of Technology’s gymnasium has basketball hoops, volleyball nets and just about everything else you might expect from a university recreation center.

But this gym, where the IIT Scarlet Hawks compete for Division III bragging rights, is also the site of a revival of a 19th-century dispute between two of the country’s most important inventors. Except in this instance, the famous dispute looks more like a collaboration of sorts.

In the basement of the gym, tucked between the weight room and vending machines, is something called a “Nanogrid Inverter Room.” Across the hall are 14 Aquion grid-scale batteries, battery status monitors, and a host of controllers and inverters that direct power from rooftop solar panels down into the batteries or back onto the grid.

The so-called nanogrid is the latest feature of IIT’s microgrid, an islandable network of power generation and storage that the university says has improved its energy reliability and efficiency. The nanogrid unveiled last week is essentially a smaller microgrid within the campus-wide microgrid, like Russian dolls nesting within one another. The building has its own solar power supply that keeps the lights on and charges the onsite battery bank. If the rest of the campus’ power goes offline, the nanogrid can island itself from the rest of the microgrid and continue to operate.

What makes this system especially unique is its hybrid use of alternating current and direct current. Typically, solar power is generated in DC and is then converted into AC for use in AC-based appliances and the traditional electrical grid. But an increasing number of our everyday gadgets – laptops, smartphones, electric cars and others – intrinsically rely on DC power. In those cases, the electricity is once again converted from AC back to DC power, using small inverters packed in the familiar bulky boxes at the end of power cables.

“If you’re going to generate electricity in DC, then why are you converting it to AC, knowing that it’s going to be converted back to DC?” Shahidehpour asked. “First of all, you have to have a lot of equipment to do that, which is costly, and also you lose efficiency.”

IIT’s nanogrid bypasses this need for double conversion, allowing DC power generation from 180 kilowatts of rooftop solar panels to feed directly into the loads that require DC – for example, the energy-saving LED lights that have been installed in the gym’s ceiling. The system still uses AC-based batteries and power from the grid to power more traditional loads – the swimming pool’s pump, for example. There’s also an inverter between the two hubs, allowing one to transfer power to the other if need be.

What’s more, the building’s peak power demand is 90 kilowatts – well below what the rooftop solar panels provide, Shahidehpour says. That means the building sends more than 50 percent of the power it produces back to the broader campus microgrid.

“Our hope is that some day we can do this throughout the university, where we build nanogrids everywhere through this system so we can island individual nanogrids and interconnect individual nanogrids,” Shahidehpour said during the ribbon-cutting ceremony last week. “Hopefully, this will be the way of the electricity of the future … where you have clusters of systems that are managed individually.”

The battle between AC and DC dates back to the late 19th century when Thomas Edison and Nikola Tesla famously debated their relative merits. Because it could be more efficiently carried across long distances, Tesla’s AC largely won out in the end – including at the 1893 Chicago World’s Fair – and it continues to dominate today’s electrical grid. But the limitations of DC are less of an issue in a small-scale system.

Still, in many ways, we already live in a hybrid AC/DC world, says Bruce Nordman, a researcher in the Building Technology and Urban Systems Division at Lawrence Berkeley National Laboratory. A laptop computer is a kind of hybrid nanogrid, Nordman notes. It can distribute power to devices via DC-based USB cords, or store it in a battery. In most cars, the power supply is DC, too.

The larger question, says Nordman and others, is to what extent we should build even more DC capacity into core infrastructure and develop the kind of structure-level nanogrids that Dr. Shahidehpour has built at IIT.

“As more and more devices are internally DC … the optimal balance between [AC and DC] is shifting,” Nordman told Midwest Energy News. “I suspect we will always use AC for the utility grid, and we will always have many AC loads in buildings. But, 30 years from now, probably a significant fraction of most building loads will use DC distribution.”

The use of “direct-DC” can save between 5 percent and 14 percent of electricity in residences with PV solar, according to a 2012 paper published by Lawrence Berkeley National Laboratory. Should PV penetrations reach their projected levels by 2035, direct-DC could save the nation between 10 trillion Btu and 40 trillion Btu, according to the paper.

In 2008, the EMerge Alliance, a not-for-profit industry association, was formed to develop new standards for DC power distribution within commercial buildings. The group has developed two standards so far – a low-voltage DC nanogrid for use in commercial interiors, and a more robust version to use in data centers and other telecommunications applications. EMerge aims to develop more standards for using DC outdoors and for larger commercial and industrial loads like heating and air conditioning.

Last December, the group signed a memorandum of understanding with the IEEE Standards Association, which writes many of the rules that currently govern the grid. The collaboration allows for “exploring IEEE adoption of EMerge Alliance standards,” which could bring DC nanogrids more into the mainstream.

Back in the basement of IIT’s nanogrid gym at last week’s ribbon-cutting, Marc Lopata, an Azimuth Energy engineer who led the system’s construction, spoke with guests in one of two battery rooms.

At one point, he called over to a colleague in a nearby control room and asked him to turn off the grid. “Go ahead, hit it,” he said. Somewhere a switch was thrown, and a soft mechanical thud sounded. The lights in the battery room just barely flickered. A slight electrical hum rose in the room, and everything continued as normal.

“Ok, now we are running 100 percent on batteries,” Lopata said.

In effect, the nation’s entire grid could have been down, and yet you wouldn’t even have known it standing on this little island in Chicago’s Bronzeville neighborhood. So slight was the transition that some guests mistakenly asked Lopata how long it would take for the power supply to switch over to the batteries.

“That’s it,” he said, reiterating that the batteries kicked in immediately thanks to a set of inverters that are always running in parallel to the grid and sensing the supply. He called the colleague again to reconnect to the grid, and this time the change was virtually imperceptible.

Engineers prefer to keep it that way.

Independent reporting on Illinois smart grid issues is made possible by a grant from the Illinois Science & Energy Innovation Foundation.