Photo By
University of Illinois at Chicago / Jenny Fontaine 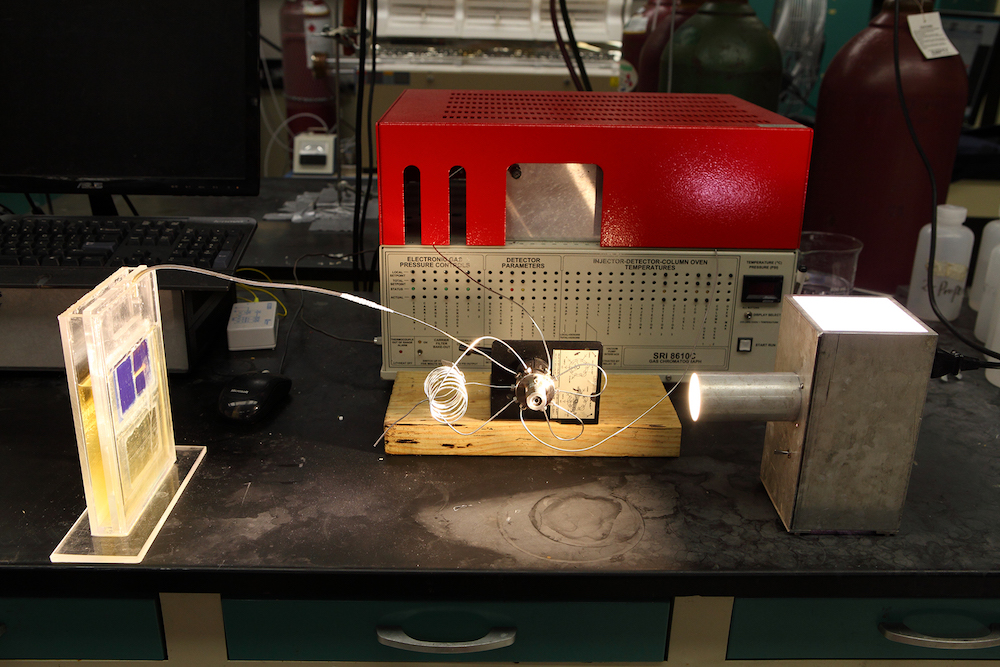 Some see it as an energy holy grail: an “artificial leaf” that uses the power of the sun to split and rearrange molecules to create clean, renewable fuel.

About five years ago, scientists pioneered and refined an artificial leaf that uses sunlight to separate hydrogen from oxygen in water molecules, to create hydrogen fuel.

This summer researchers at the University of Illinois at Chicago released promising results taking a different approach. Their artificial leaf uses sunlight’s power to separate carbon dioxide into carbon monoxide and oxygen.

Then the carbon monoxide is turned into synthetic gas — or syngas, which can be used as a vehicle fuel — burned to generate electricity or enriched into diesel or other fuels.

Researcher Amin Salehi-Khojin said this is the first time an artificial leaf has been used to make syngas.

“We need a source of energy to activate the reaction — instead of external electricity, we just use the energy from the sun, nothing else,” said Salehi-Khojin, an assistant professor of mechanical and industrial engineering at UIC and senior author on a recent paper explaining the technology.

Salehi-Khojin visualizes artificial leaves located in tandem with solar farms at places where the syngas can be used onsite. If the arrays are located near chemical plants, factories or fossil-fuel-fired power plants, they can tap the carbon dioxide emitted from those operations, avoiding its release into the atmosphere and essentially recycling it into more fuel.

The key to the UIC team’s technology was the development of a catalyst that achieves carbon reduction – breaking carbon dioxide into carbon monoxide – much more efficiently and cheaply than other methods.

“Electrochemical or photochemical reduction of carbon dioxide could in principle conveniently recycle the greenhouse gas back into fuels,” says the paper by Salehi-Khojin and colleagues published in the July 29 issue of Science. “However, existing catalysts are too inefficient in practice.”

The UIC researchers use tungsten diselenide nanoflakes as a catalyst, and they use a special formula of water and ionic fluid to prevent the chemical reaction from damaging the catalyst, a pitfall that has plagued similar strategies. The ionic fluid and catalyst are located on the cathode side of the artificial leaf. The anode side is coated with cobalt oxide in potassium phosphate electrolyte.

“Hydrogen and carbon monoxide gas bubble up from the cathode, while free oxygen and hydrogen ions are produced at the anode,” notes UIC’s press release.

Chemist Nate Lewis is scientific director of the Joint Center for Artificial Photosynthesis at the California Institute of Technology and a national leader on artificial photosynthesis. He said the UIC research is a valuable contribution to the larger field.

“That’s an interesting route,” Lewis said about UIC’s technology, noting that it is more efficient than other forms of carbon reduction, but also involves the challenge of containing carbon monoxide, a toxic gas. “If it leaked, it wouldn’t be so green or clean.”

‘Better than a battery’

Lewis explained that there are three primary ways to use an artificial leaf. The one his lab has focused on most is separating out hydrogen as a fuel for planes and vehicles or to be burned in peaker plants making electricity. Such plants can be located on the grid, providing energy storage on the grid to even out electricity supply when solar or wind power fluctuates.

“We’re literally splitting water,” Lewis said. “It’s the simplest [method] chemically so it gives us the best shot at learning the technology lessons we’ve got to learn. … It’s a way we swim in the shallow water … before diving into the deep water.”

At the Wyss Institute at Harvard University, energy professor Daniel Nocera uses an artificial leaf to separate hydrogen from water, then uses “hydrogen-eating bacteria” to turn it into liquid fuel.

Artificial leaves can also be used to separate nitrogen out of the air, using it to make ammonia for fertilizer.

And as Salehi-Khojin’s group showed, artificial leaves can separate out carbon monoxide which can be combined with other molecules to make syngas. Syngas could also be used for plants providing energy storage on the grid.

“With the energy of the sun we convert the chemical bonds of carbon dioxide into other hydrocarbons,” said Salehi-Khojin. “That is the most efficient way of storing the energy of the sun. You can take it anywhere, any time and burn it. It’s better than a heavy battery.”

Lewis said that practices developed and lessons learned from one way of using the leaf are often transferable to other methods. He sees the various types of artificial leaves as different routes to the same end, since chemical plants, oil refineries and the like have long been used to combine and convert different compounds. In other words, the artificial leaf uses free, clean power from the sun to provide the molecular raw materials that can be used to custom-make fuel for power plants or vehicles.

“We’re not hung up by which fuel we make from the sunlight,” Lewis said. “We’ll take any fuel because we know how to convert one fuel to another.”

As with any renewable energy innovation, it remains to be seen whether the UIC method or any other artificial leaf will be able to make large quantities of energy or fuel that is cost-competitive with other sources.

A National Geographic story about Nocera notes that the startup company he founded after unveiling artificial leaf breakthroughs soon stalled because the hydrogen fuel couldn’t produce energy for the grid or combustible fuel competitively with other technologies and sources.

Lewis said that while the technology is still in the early stages, it holds significant promise.

“We’re not there, in the sense that there’s nothing that can be commercialized next week or next year especially at scale,” he said. “But this is like putting together an airplane. You have to get all the pieces, they have to work together all at once. It’s a question of getting everything that works, is safe, is cheap, lasts a long time and can be manufactured at scale.”

In June, Lewis testified about the promise of artificial photosynthesis before the U.S. House of Representatives Committee on Science, Space and Technology’s energy subcommittee.

“Artificial photosynthesis does not look like a leaf, nor does it look like a solar panel,” he told legislators. “Instead imagine a high performance fabric that can be rolled out like artificial turf, supplied with sunlight, water, and perhaps other feedstocks in the air such as nitrogen and/or carbon dioxide, and produces a fuel that is wicked out into drainage pipes and collected for use.”

“We’re making a lot of progress, we’re seeing lots of advances now and over the last several years from lots of research groups,” Lewis said. “It’s a pretty exciting time.”