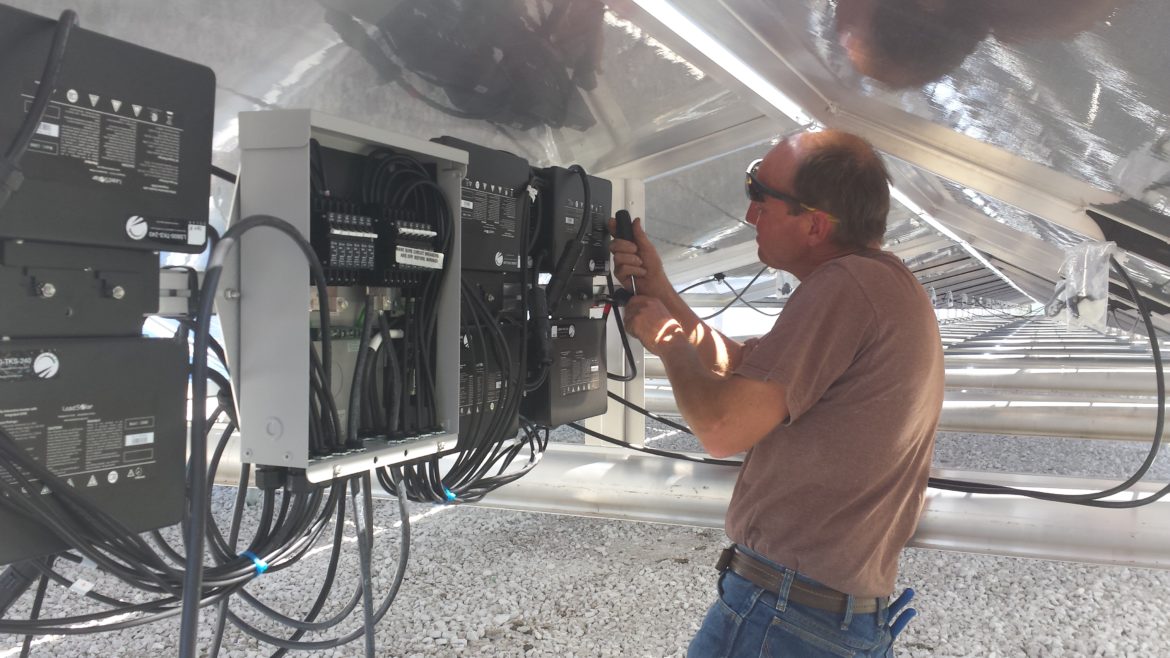 An electrician installs inverters on a solar array near Denison, Iowa, for the Western Iowa Power Cooperative.

While many larger utilities push back against customer-owned solar, a small rural cooperative in Iowa is taking a different approach.

In addition to its traditional electricity business, the Western Iowa Power Cooperative now is an installer of solar systems – for other utilities as well as its own residential customers. It is the only power co-op in Iowa to double as a solar installer, according to the state’s electric co-op association.

In 2014, it installed its first system: 49 kilowatts of capacity for a farm operation. To date, WIPCO has installed 952 kilowatts in total. Earlier this summer, it added a new dimension to its installation work: it put together a community solar system for another power cooperative in Iowa. A couple other utility-scale projects are in the works.

“We got into this business because our board and staff was looking at where solar was going, and we said, ‘Our customers can buy a solar panel at Lowe’s or Home Depot, but they can’t buy one from us here at the co-op,’” said Jeff Bean, Western Iowa’s general manager. “We want to remain the energy experts to our members. To do that, we felt we had to be in the business and provide a solution for that.”

WIPCO was hearing from its customers that they wanted to install solar panels. However, according to Stephanie Wiese, the utility’s director of member services, “Our members were installing solar and not understanding what it would do to their bill.” Systems sometimes were oversized, she said, with unnecessarily high costs.

The utility management decided it needed to provide information to its members.

“We install solar,” Bean said, “but it’s the education piece that’s important to us. We want to make sure that the member or non-member knows exactly what they’re getting if they install a solar unit.”

WIPCO’s next venture into solar was an experiment with its own community solar system. Last year, a pair of arrays with a total capacity of 579 kilowatts began operating on the grounds of the utility’s two offices. The system is 92 percent subscribed, and began pumping out power on June 15.

After that success, WIPCO’s management decided to offer the utility’s experience and services to other utilities, both rural electric cooperatives and municipal power providers.

“We’re willing to help any co-op and any municipal looking to put in a solar project,” Wiese said. “We are managing their projects for them, helping them figure out what system works best and ordering the system. Our installers are installing the panels for them.”

Having done the leg work to create their own community solar system, Wiese said, “We are bringing our knowledge to the table for them so they don’t have to go through the research in finding out what system is best for them. It’s the co-op among co-ops.”

Western Iowa is now working with a couple of electric co-ops that are investigating community solar. It has completed a project for the Osceola Electric Cooperative, which was the first utility to tap WIPCO for the job. Osceola bought 560 panels from a vendor in Minneapolis to establish a community solar array. Then it started searching for someone to install them in rural northwest Iowa.

“We couldn’t find anyone in our area that would have the expertise to do it,” said Osceola’s general manager Jeff Ten Napel. “We hired WIPCO. They shot me a price which was very good for what we’d been looking at.”

Hiring a fellow electric cooperative to do the work, he said, resonated with one of the seven principles that undergird the co-op system; “cooperation among co-ops.”

“Everything seems to be working great,” Ten Napel said. “We put 33,000 kilowatt hours on the grid in July.”

Not only was the price right, he said, but “We know how they work. It gave us a comfort level.”