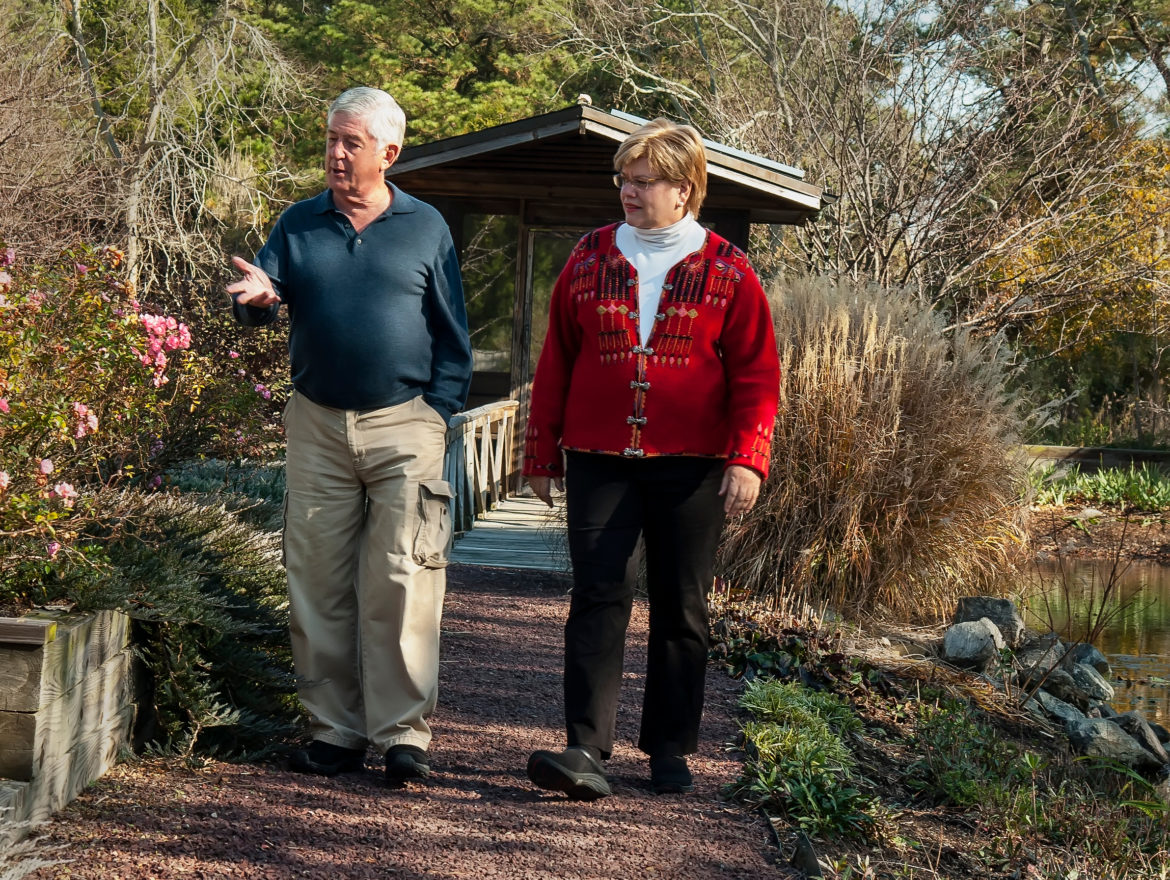 Stuart Rose and Trina Duncan walk the grounds of the Garden Atriums community in Virginia.

In 2002, Stu Rose and Trina Duncan moved into the first home in a tiny Virginia neighborhood focused on achieving net zero energy use and sustainable living. Fourteen years later, the Garden Atriums community near the Chesapeake Bay is complete and nearly independent of the energy grid.

Six of the seven homes are occupied. Husband and wife developers Rose and Duncan have downsized into the final home and have placed the original nearly 5,000 square foot prototype house on the market.

More than 12,000 people have visited the community. Rose has spoken at events ranging from local Sierra Club to a NASA sustainability conference as well as to groups in Ireland, Finland and Canada. He’s also working with a screenwriter on a movie.

Monthly energy bills are zero most of the year and under $100 even during peak times, compared to $200-$400 and more for homes of similar size, Rose says. PV panels and geothermal systems power the homes. Rooftop water heaters provide hot water. Garden Atrium homes build credit with Dominion Virginia Power during the fall, winter and spring and then use those credits when running air conditioning during the summer. Each homeowner pays $8.40 a month for being hooked up to the grid.

Passive energy storage is via stones, fountains and other features that soak up sunlight from the atriums and release heat at night. “The design intent is to be sure there’s enough thermal mass to keep the house comfortable until the sun comes up the next morning,” Rose says.

For active storage during colder weather, Rose and Duncan are installing Tesla Powerwall batteries in their new home and plan to go completely off the grid.

“We’ll always have needs for power, but the source and distribution will shift,” Rose says. “Power generation after WWII was via large regional plants, coal or nuclear. Over time, power plants have become smaller and smaller, often now using cleaner natural gas. Our PV arrays are simply very localized power plants to power our home, our car, our mowers, etc. The air is cleaner and the cost is less and getting lower.”

Rose, a non-practicing architect, began planning the community in the 1ate 1990s and did the conceptual design. He consulted with and hired experts for the passive solar features, the PV design and rainwater harvesting. On the building side, he consulted with both a developer and a real estate appraiser. He ran focus groups to gauge acceptance in the market.

Rose and Duncan took out a second mortgage on their Georgetown home to fund the project—local lenders wouldn’t touch it. The Garden Atrium home opened for tours in June 2002 and 3,400 visitors came through the first four days. Rose and Duncan, who hosted open houses nearly every weekend in the early months, moved in permanently that November.

As more atrium houses were built, Rose experimented with energy-saving and sustainable features and has learned key lessons in case he or anyone else decides to build a similar project.

“My ultimate intent is to demonstrate to established developers and homebuilders that this is a viable alternative, and have them use the concepts themselves,” Rose says. “Intellectual property isn’t an issue, as I’d give them as much help as they’d like. Having established developers build sustainable developments, year after year, is the only way we’ll reach the numbers needed to make a real difference.”

Homes at Garden Atriums are equipped with solar panels.

The city planning commission initially opposed the project and Rose and Duncan went to the mayor and City Council to get the project approved.

“City regulators fought us because what we were doing was different,” Rose says. “They prefer new developments to look like old ones. We even spent thousands in legal fees to do what was legal. Now their attitudes have changed. We get lots of positive publicity, which the city likes.”

Builders and other advisors tried to talk Rose into offering the energy-efficient features as extras to lower the upfront base cost.

As for Realtors and home buyers, “People are used to a certain type of home – or at least within what you might see as a traditional range of home styles,” he says. “Real innovation that changes what’s normal poses a threat to their notion of comfort and their perception of how readily their home might resell.”

It’s hard to compare a Garden Atrium home and others on the market. Homebuyers are used to considering total home cost, cost per square foot and/or monthly mortgage payments. Although a Garden Atrium home appears to be more expensive upfront, such a home is nearly $100 a month cheaper when savings in energy, water and tax deductions are factored in, Rose says. Rose, who has extensive figures to back up his energy saving claims, held firm to his vision.

But in the end, the energy savings weren’t the key selling point. Buyers had heard these claims before.

“From a marketing perspective, the energy saving claim actually may have hurt credibility,” Rose says. “Green-washers who advertise non-measurable claims such as energy efficiency … are what buyers are used to. The number one reason people actually bought a Garden Atrium was aesthetics, not energy or saving on utility bills.”

Each home is built around a central garden atrium with lush plants. Interior rooms have glass walls facing this indoor garden. Residents share a garden, a gazebo, an orchard, pond and boat dock for small craft.

“Some residents, whose number one reason for buying was aesthetics said that they saw our claims of net zero as sales hype,” Rose says. “Of course, they saw it differently later, when they got ridiculously low utility bills.”

Lots of clear glass not so good for energy use

In the first prototype home, the atrium is one giant skylight. But glass is not a great insulator, Rose notes. When temperatures dip into the low 30s, the geothermal unit comes on from midnight to 2 a.m., he says. Skylights in the next six homes have opaque coverings over the north half so temperatures have to reach the low teens to trigger the backup geothermal system.

When planning the sixth house, Rose found a company that makes an outside shade to go over the atrium skylight to limit solar heat on hot days. Reducing the geothermal system capacity by one ton more than made up for the cost of the shade, he says. “We can push a button and the shade opens in 10 seconds and we can look out and see the night sky,” he says.

Some early houses included customizable voice-activated and motion-sensing controls. But these did not prove useful to residents, Rose says, and were discontinued in later homes.

A couple of years ago, Rose added 2 more kW of PV panels on the prototype house and bought an electric Smart convertible for use by any resident for $3 an hour. Another house also added 2 more kW. The final home was built at 5 kW to have capacity to charge an electric car.

“Why not include sustainable driving in the plan,” he muses. “The couple next door uses the convertible for dates.”

Overall, Rose is bullish on the future of renewables. “Long-term, the renewable resources will win out completely,” he says. “Solar power now employs more people than coal, which used to be the cheapest form of power. The coal companies are going out of business. Over time, jobs will simply shift from one industry to another. But the people who have done things a certain way for decades have a hard time letting go … like buggy whips.”