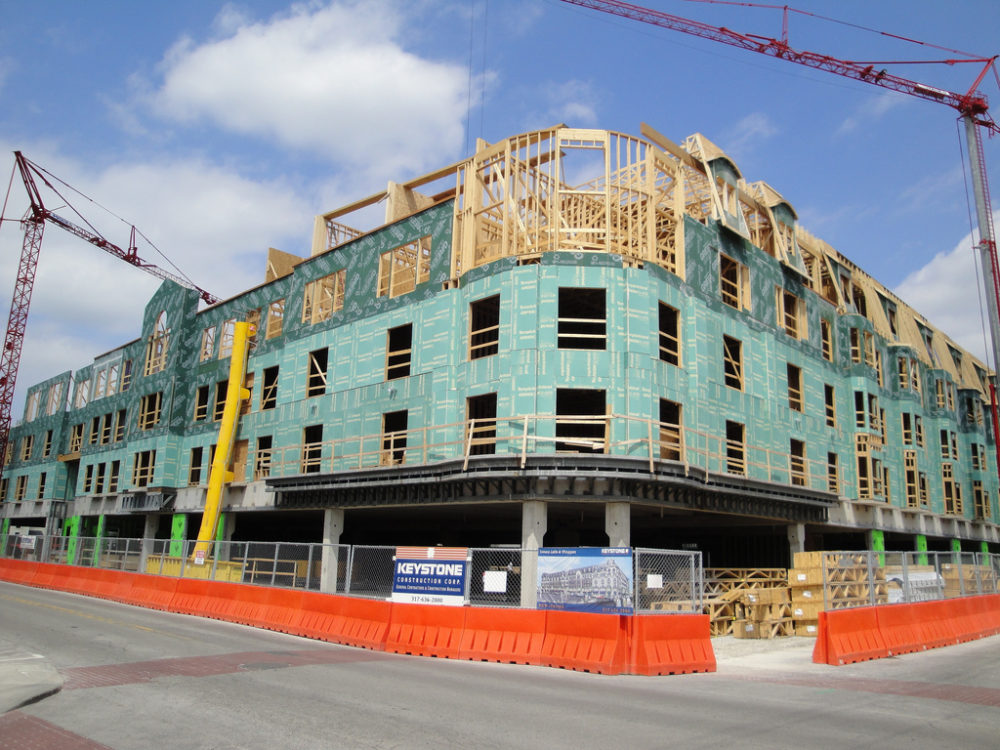 New apartments under construction in Carmel, Indiana in 2010. The city is saving money and cutting emissions by adopting a more European approach to development.

Indiana is not typically considered a leader on addressing climate change. It was among the states that sued to block the Clean Power Plan. It gets three-quarters of its power from coal, and it is home to the country’s largest inland oil refinery along with other carbon-emitting heavy industry. Governor and Republican vice presidential nominee Mike Pence is a long-time climate change skeptic.

But a handful of Indiana mayors are taking a different tack, talking about how their cities can prepare for and help mitigate the effects of climate change. On August 24, Carmel Mayor Jim Brainard and Whiting Mayor Joe Stahura led a Climate Leadership Summit convened by the group Earth Charter Indiana.

Midwest Energy News talked with Brainard shortly after the summit. Five-term Republican mayor Brainard has made national headlines for his efforts to revamp Carmel, inspired by European culture, design and sustainability. Brainard served on President Obama’s  State, Local, and Tribal Leaders Task Force on Climate Preparedness and Resilience, and he co-chairs the U.S. Conference of Mayor’s Energy Independence and Climate Protection Task Force.

Midwest Energy News: How is Carmel affected by climate change?

Brainard: In Central Indiana we’re not coastal by any means, we have a bit more time perhaps than cities on the coast or Great Lakes [before experiencing major impacts]. But we are dealing with more frequent storms and much more intense storms. We’re upgrading our sewer systems to be able to handle that amount of water. And of course as temperatures change, insects don’t die off during the winter, it changes how farming is done.

There are a lot of issues in an area like the Midwest that we need to be prepared for. Kokomo, Indiana was hit with a tornado just the afternoon of that meeting, where I was with the Kokomo mayor talking about resiliency. Five hours later, huge parts of his city were destroyed, 30 minutes north of Carmel.

Don’t assume Indiana is Republican – it’s about 50-50. It tends to trend Republican in presidential years, but the governors during my lifetime have been about 50-50. The Senate is split. This is a city that is about 80 percent Republican. And people are very concerned about climate change.

The Republican Party has a history of environmental action and involvement. I point out to Tea Party types sometimes that the root of the word conservative is to conserve. I have yet to meet a Republican or Democrat who wants to drink dirty water or breathe dirty air.

There’s a tremendous history in the Republican Party of conserving your natural resources, preserving the earth for your children and grandchildren. Teddy Roosevelt created the national parks. President Nixon and his Republican successor Gerald Ford signed a host of bills setting up the entire environmental regulatory framework…It should not be a partisan issue, it should be guided by what’s best for future generations. There are a lot of moderate Republicans out there who I think agree with me but are afraid to speak out because of the louder-shouting wing of the party.

So what is Carmel doing to mitigate climate change?

The most important is city design. We have designed our cities in this country so the average American is driving about 100 miles a day. That includes all the people in New York, Chicago, Washington that don’t drive at all. So there are people driving far more than 100 miles a day.

At the end of World War II, the average working person in the U.S. had more money than ever before. They could afford cars, gas was cheap, you get out and buy these beautiful lots in the country. Our parents did that, our grandparents did that – it was the American way of life. At the same time, we threw out everything we knew about how people lived in cities, and created these great sprawling metropolises.

‘You get more taxes on a five-story building, and you’ve reduced the amount of street you need by four-fifths.’

So everything built since World War II, whether suburbs or expansions of major cities, has been built for the automobile rather than for people. Cul-de-sacs, road grid systems were built without sidewalks – you couldn’t walk to the drycleaners or the corner bar or whatever.

So what we’re doing in Carmel that is different, the center part of the city we’re building like a Western European city would have been built. Buildings with five levels, and incentivizing and helping developers pay for parking underneath the building. If you go up five levels, it reduces the amount of street you need by five times…You get more taxes on a five-story building, and you’ve reduced the amount of street you need by four-fifths. And the amount of electric lines and sanitary sewers, and policing that you need, stays the same.

So there are these huge cost savings in addition to reducing the distance people need to drive between places. Basically what we’re doing is building these walkable pedestrian-friendly areas, the idea is people will be able to walk everywhere, and if they do have to drive, it will be short trips. We’re applying a lot of attention to the plazas, the pocket parks when people live in dense areas.

What else has the city done to be more sustainable?

We’ve built more roundabouts than any other city in the country. Why? Safety. An 80 percent reduction in fatalities. It’s also reducing the amount of carbon – with a lack of idling at stoplights using millions of gallons of fuel per year.

We’re powering our sanitary sewer district with methane from bio-solids. We’re capturing that energy and using it to heat up the effluent, and we can sell [the treated waste] as fertilizer, it doesn’t have to go in the landfill.

We’ve built about 187 miles of bike trails in the last 20 years, and we require people to put in bike facilities at every new business. City council even had an ordinance that would require businesses to provide showers [for people who bike to work]. It didn’t pass, but that shows how people are thinking. In a city of 100,000, 200 miles of new bike trails is a lot.

All of our city vehicles have to be hybrid. And we’re experimenting with hydrogen trucks now to plow snow, they’re working fine.

How do you fund all these efforts?

Many of the sustainable things actually save us money. We put $700,000 into switching our street lights to LEDs. The electricity savings result in 22 percent internal rates of return each year. That’s more than I can get in a CD in the bank. And the methane capture saves money. There’s so much low-hanging fruit.

You’ve talked about sustainability as a way to keep Carmel competitive. What does that mean? Are you attracting renewable energy industry here?

There’s not much industry in Carmel, it’s white-collar.

But so many of these [renewable energy] products are being made overseas. Why don’t we get involved in incentivizing these industries [more] in our country – wind turbines, solar panels, hydrogen engines.

Being competitive as a city also means that we cut down health care costs for our residents. But we can’t do that if our electricity is being produced by coal. We aren’t going to be sustainable economically in this state unless we cut down our coal usage.

And we ought to be thinking about the fact that there are only 2,800 direct jobs left in the coal industry in Indiana. It wouldn’t be hard to provide retraining, better jobs for people who now have to go into coal mines. I don’t think anyone would want to do that job if they didn’t have to.

So has Carmel always featured a dense city center and European-style design? Or are you reshaping it?

Carmel used to be a little farming village, little shacks, very poor, 15 miles outside of Indianapolis. Then like many suburbs across the United States in the late ’40s, ’50s, it began to grow for a variety of reasons, and now we’re at almost 100,000 … 70 percent of the population with university degrees. This is the generation that’s going to design our city – the way we lay out streets that are going to be here for centuries. We’re the generation that gets to shape the city.

People who are well-educated have choices about where they can build their businesses, their families, establish their careers. We don’t have mountains or ocean, so it’s all about design. Paris had the same type of [geographic] palette we do – and they did just fine. Money Magazine ranked Carmel the best place to live in the U.S. 2012, and in 2014 we were third.