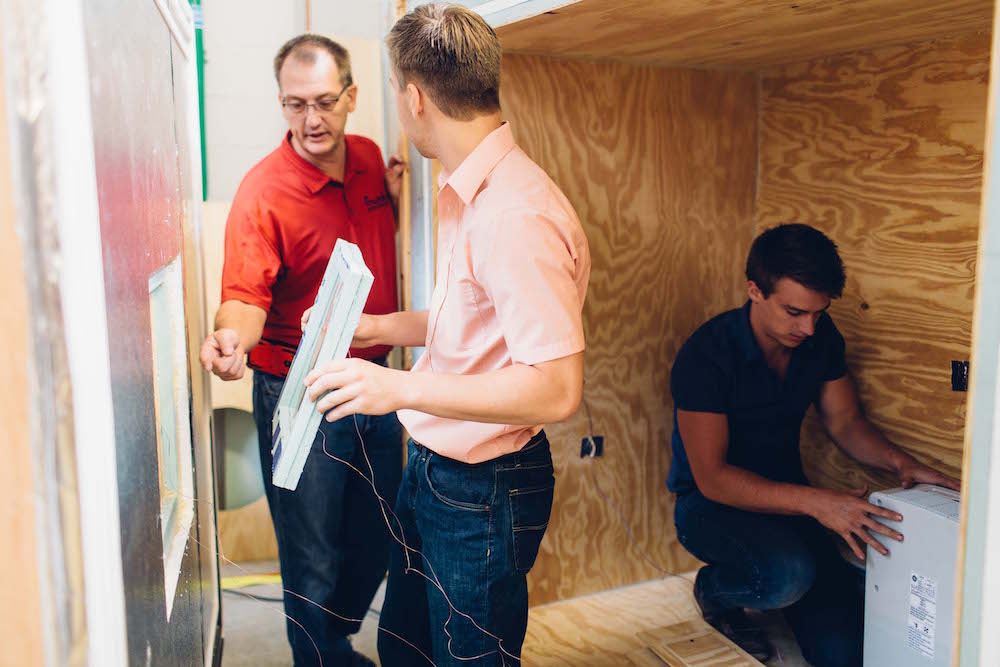 “We need to fix the window problem.”

That was the recurring comment John Slagter heard from customers before setting out to tackle a new and more affordable approach to energy efficiency in buildings: Window coverings that have the same insulation value as walls but are still fully transparent.

Slagter had been focused on vacuum insulation panel technology in walls to reduce energy use, but that concept proved more popular in Europe than in the U.S.

“People kept saying we needed something for the windows. They are the biggest cause of energy loss, but people still needed to be able to see through them. At the time, I thought that was impossible,” said Slagter, president of Grand Rapids, Michigan-based Mackinac Technology Co.

More than five years and millions of dollars in federal investment later, though, Slagter is on a path to commercialize a new efficiency product that tackles the tricky nature of windows. Many are poorly designed and waste roughly half of heating and cooling in buildings, but the energy savings in a complete re-installation of them isn’t usually worth the cost.

That’s where Slagter’s window covering comes in. It is not a film or a window itself, but rather a polymer pane that feels like durable plastic and bends to the touch. It’s applied to the interior of a window and can be custom fit to any frame, with multi-pane units that can increase the insulation value.

And instead of costly window and frame replacements, Slagter aims to have his low-emissivity coating available at a price point that could be paid off within five years through efficiency savings.

The product is geared toward residential and commercial retrofits, but it also attracted the attention — and funding — of the U.S. military, which has been steadily cutting its energy use over the past decade.

Researchers with the major German research firm Fraunhofer-Gesellschaft and Michigan-based Calvin College are working with Mackinac’s engineers on different phases of testing and prototypes. They hope to have a product on the market in about two years.

The several years’ worth of development so far appears to be paying off: A two-year, $2.5 million grant through the U.S. Department of Energy’s Advanced Research Projects Agency-Energy (ARPA-E) has recently kicked in and the team plans to submit seven or eight more grant proposals in the coming months.

Last week, Mackinac signed a $1.1 million contract with the U.S. Army Corps of Engineers’ Research and Development Center to develop a product for Department of Defense facilities. Major utility DTE Energy in 2012 provided funding for testing. And Slagter was a finalist for “innovator of the year” in this year’s Governor’s Energy Excellence Awards in Michigan, which recognizes energy efficiency programs statewide.

The transparent polymer panes are bordered by foam frames that fit into windows. The research team’s key task is developing the see-through material with new polymers that are more durable and less resistant to discoloration compared to existing polymers, and that also reflect ultraviolet light from outdoors.

“We can advance an R-value higher than any other window technology currently on the market,” Slagter said.

He added that his product can reduce heating and cooling energy loss by 50-60 percent and reduce a building’s total energy demand by 10 percent.

Researchers at Calvin College are focused specifically on quantifying the costs and benefits.

Renard Tubergen, an associate professor of engineering at Calvin who is helping on the project, said the efficiency industry has “long roots” due to the “short-sightedness of producing buildings in the 1970s.”

“(Slagter) is taking significant technology and applying it in a new way that hasn’t been done before,” Tubergen said. “He brings a unique vision to these problems. I’m very optimistic that this project will bear some very strong fruit.”

In what can already be considered the well-established industry of energy efficiency, Slagter said he hopes to offer contractors “a tool they don’t have available now” during energy audits.

“Most energy audits don’t recommend doing windows” to achieve efficiency savings, Slagter said. “Ripping windows out, putting in new ones doesn’t work economically. This is a much lower cost, simpler solution and you leave the existing window in place.”

“Injecting money in windows to achieve energy efficiency will not get you anywhere near the payback you need or want because the energy saved is so minimal,” Byrd said.

While he says energy loss from windows is equally attributed to air leaking around the window frame as it is with the glass, Byrd said Slagter’s approach is interesting because it targets the glass itself.

“If I were a contractor and wanted to offer a full slate of solutions (to a customer), I’d bring a product like this to offer,” Byrd said. “That might be the differentiator between me and the other guy.”