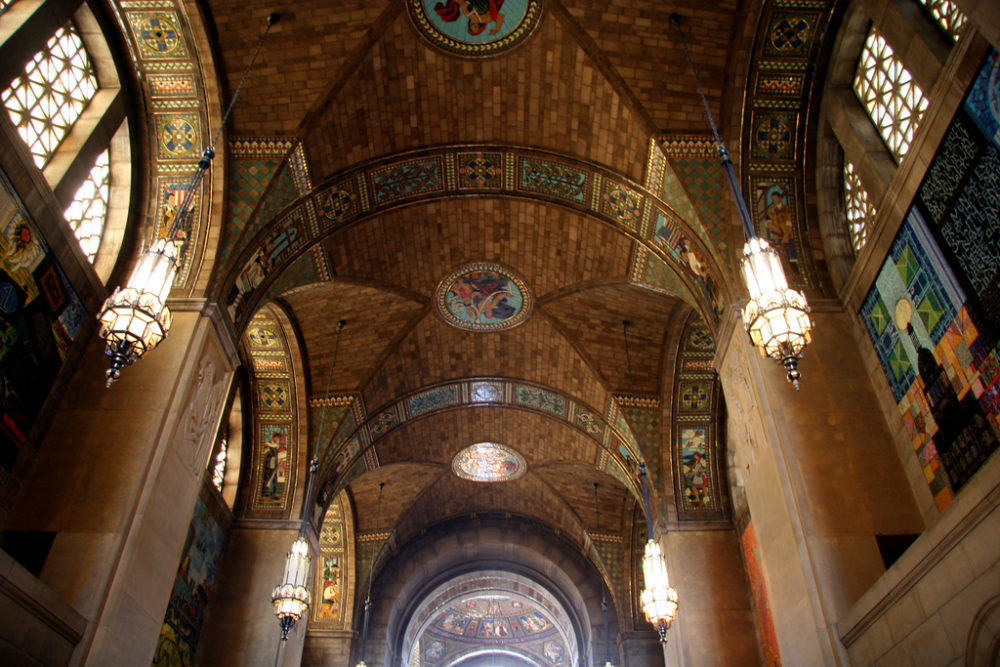 Interior of the state capitol building in Lincoln, Nebraska.

Nebraska is making another stride on efficiency, launching an initiative to measure – and eventually reduce – the energy used in buildings throughout the state.

Last month, the federal Department of Energy preliminarily awarded the Nebraska Energy Office $300,000 to begin benchmarking energy use in all 3,762 state-owned buildings. The work is expected to get underway by early 2017.

While the project will begin with state-owned buildings, David Bracht doesn’t necessarily see it stopping there. He directs the Nebraska Energy Office, which will manage the use of the federal funds. As a second step, he anticipates “developing an energy performance benchmarking policy that we can offer to local governments to encourage their improvement in energy efficiency as well.”

He hopes that the practice might trickle out eventually to owners of private property as well.

Nebraska, which has typically lagged other parts of the country on efficiency policy, recently passed a PACE financing law, which could help property owners pay for improvements.

Benchmarking usually refers to the use of a software program – such as Portfolio Manager, developed by the Environmental Protection Agency – that can be used to document the energy and water used in a given structure. The program can track those figures over time, or compare them to similar buildings under the same ownership, or against the national average of buildings of similar size and function.

There are indications that benchmarking – especially in privately-owned commercial property – is having an impact on energy use, according to Cliff Majersik, the Institute’s executive director.

“There have been a number of studies, and all are indicating that these laws appear to be saving energy and driving energy efficiency,” he said. “The trends are generally towards improving scores.”

Several studies have found that energy use dropped after benchmarking data was made public. A 2015 report published by Resources for the Future noted a 3 percent reduction in utility expenditures before and after disclosure among benchmarked office buildings in New York City, Seattle, San Francisco and Austin, Texas, the first cities to mandate reporting of energy and water use. The authors noted that their results were preliminary.

The San Francisco Urban Land Institute found that, between 2010 and 2014, energy use among 176 benchmarked properties fell by 7.9 percent.

The New York City Benchmarking and Transparency Policy Impact Evaluation Report, published in May 2015, determined that over the first four years of benchmarking in the city, buildings covered by the ordinance reduced energy use by 5.7 percent and decreased greenhouse gas emissions by 9.9 percent.

A second study done in New York City by the Green Building Council put the reductions at 6 percent for energy use and 8 percent for greenhouse gas emissions.

“We can’t say it’s all because of benchmarking scores,” Majersik cautioned, “but it’s consistent with the expectation that the laws create a virtuous cycle of competition among building-owners to improve the energy efficiency in their buildings, to attract and retain the best tenants and investors.”

The real power of benchmarking lies in the public disclosure of the information, Majersik observed. With a growing database of the energy and water used by commercial buildings, businesses shopping for space to rent or purchase now can access facts about energy use, and can factor that into their decision.

And benchmarking data is about to become more widespread – and more potent. Costar, the leading provider of commercial real-estate information, announced early this summer that later this year it would begin to include benchmarking data in its property descriptions. It will launch that feature in Chicago and Washington D.C.

An example of Nebraska’s potential

While the benchmarking initiative in Nebraska is at a preliminary stage, one complex of state-owned buildings gives some insight into future possibilities. The University of Nebraska Medical Center in Omaha snagged $13 million in federal stimulus funds several years ago and embarked on an ambitious energy efficiency initiative.

The funds went in large part towards the purchase of a more-efficient cooling system and software that monitors activity throughout the complex and automatically adjusts lighting, heating and cooling when it is not needed.

The center’s sustainability manager, Melanie Stewart, said employees were recruited to take an active role as well. Her office has trained and continues to encourage the 14,000 workers there to turn off computers and lights, to close mini-blinds and in other ways to reduce their personal demands on the center’s energy system.

“We’ve already paid for our investment in technology, and are using the savings to reinvest so we have even more energy efficiency,” Stewart said. Next up: LED lighting.

Stewart said their success has been such that the medical center has set a new goal: to cut energy use by another 20 percent by the year 2020.

Bracht, from the state’s energy office, said training will be a major thrust of the state benchmarking initiative. His office plans to bring more state and city building managers into the energy-efficiency fold by training them in how to most-efficiently run a building’s HVAC and lighting systems.

In an attempt to spread the benchmarking practice far and wide, the energy office will use some of the federal funds to train University of Nebraska architecture students to use Portfolio Manager.

“We’ll be using those students to help collect and analyze the information with the objective of providing an educational opportunity that will allow local communities to draw on those same students,” Bracht said. He envisions those students bringing the benchmarking tool to communities across the state.

Bracht said the federal funds also will support the training of at least a half-dozen STEM teachers with Nebraska’s Green Schools, who would then teach high school students how to use Portfolio Manager.

As a school project, Bracht suggested, “Those students could offer the benchmarking system to their local government or even to owners of commercial or residential property in their community.”