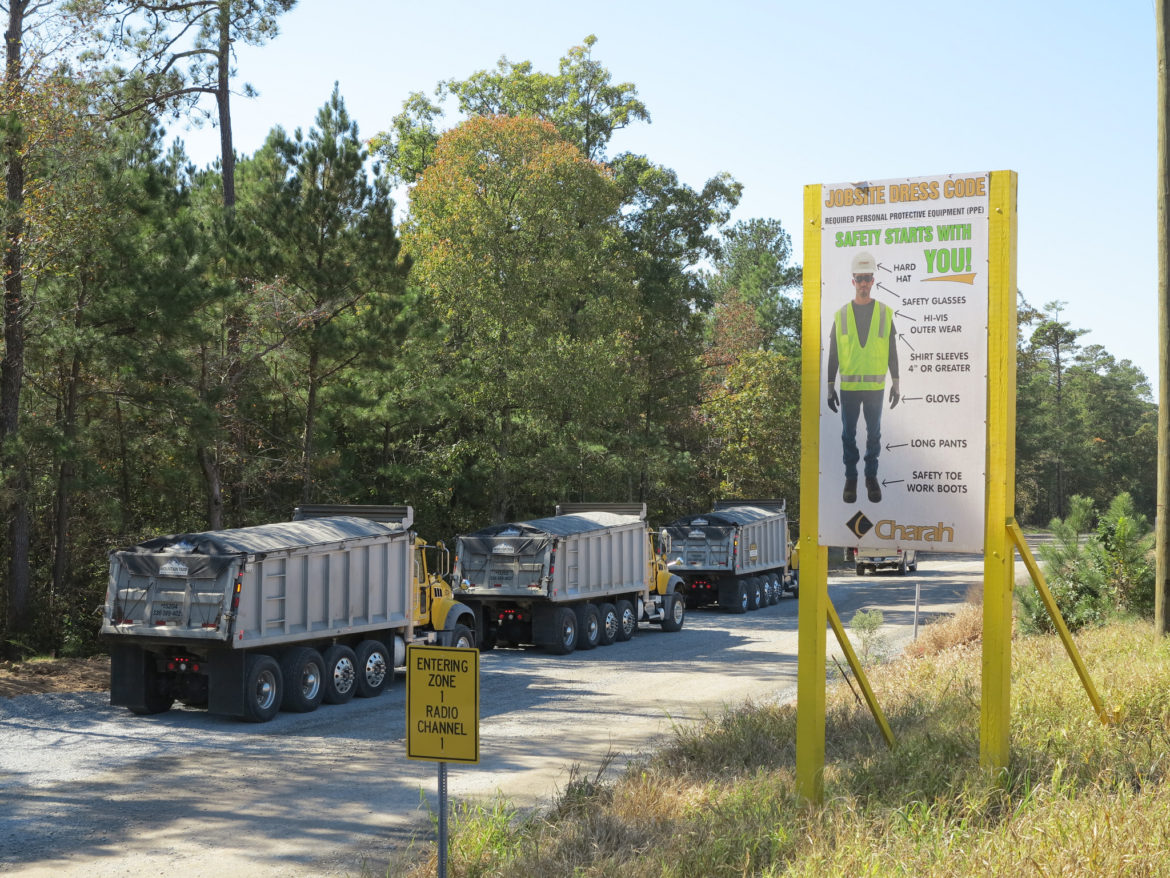 Trucks carry ash to the Brickhaven Mine storage site in North Carolina.

A draft proposal from North Carolina officials to comply with a federal rule on coal ash represents the “bare minimum required,” according to at least one critic, for a state that considers itself a leader on the issue.

The proposal, from North Carolina’s Environmental Management Commission, is in response to the U.S. Environmental Protection Agency’s 2014 rule which governs the storage and handling of coal ash. The draft rule closely follows the EPA’s baseline, with the exception of where the state’s Coal Ash Management Act already provides for additional or more stringent requirements.

The public may have a chance to comment on the rule before the end of the year.

“The purpose of this draft proposed rule is to bring North Carolina’s comprehensive coal ash regulations in line with federal requirements,” said Mike Rusher, a spokesperson for the North Carolina Department of Environmental Quality. “The draft proposal is subject to, and expected to update during this public process. The rules as you know aren’t finalized and the coming votes determine when/if this proposal will go to public review,” he added.

The proposed rule was made public during the September meeting session of the Environmental Management Commission by its Groundwater and Waste Management Committee. The rule – 15A NCAC 13B .2000 – is available for review online (proposed rule, final rule set) along with the PowerPoint presentation given during the session.

The commission is expected to vote on the proposal during its November meeting session which is scheduled for Nov. 9 and 10 in Raleigh. (The Groundwater and Waste Management Committee’s portion is scheduled for Nov. 9.) It is anticipated the commission will also establish firm dates for a public comment period and a date for a public hearing during its November session should it vote to move forward on the rule.

According to the PowerPoint presentation, if the rule-making process continues as planned, the submission of the rule’s text, fiscal notes and presentation are expected by the commission on Oct. 11, and the rule is expected to be published in the North Carolina register and on the Department of Environmental Quality’s website by Dec. 15.

The date the rule is published in the register is the likely start of a two-month public comment period. The tentative schedule noted that the earliest date for a public hearing is Dec. 30.

Should the rule proceed according to the tentative schedule it is anticipated that it will become effective by May 1, 2017, at which time it will be submitted to the U.S. EPA for approval.

Therese Vick, of the Blue Ridge Environmental Defense League (BREDL), has closely followed coal ash regulation in North Carolina for years, particularly as it concerns municipal landfills. She says that she doesn’t believe the state’s proposed rule will touch on those landfills, which is also in line with the federal rule.

The EPA’s rule excludes municipal solid waste landfills which led some of them, like the controversial Arrowhead Landfill in Uniontown, Alabama, to advertise themselves as “safe havens” for coal ash.

Coal ash waste at many sites is being excavated across North Carolina, as required by the Coal Ash Management Act, which became law sans Gov. Pat McCrory’s signature in 2014, and subsequent legislation that became law this summer with the governor’s signature. Much of that ash is being shipped to landfills in Chatham and Lee Counties.

BREDL, and its community offshoots, oppose the landfills. On June 9, 2016, Chatham Citizens Against Coal Ash Dump, EnvironmentaLEE and the BREDL filed an appeal in state superior court alleging manipulation of the permitting process for the two landfills. The court has yet to weigh in on the groups’ appeal.

“It is unclear whether schemes like the landfills in Chatham and Lee County will still be allowed, and if the siting requirements for [Municipal Solid Waste Landfills] will be required,” says Vick of the commission’s proposed rule. She also pointed out that “not a word about environmental justice” was included in the proposal.

Following a public hearing by the U.S. Commission of Civil Rights in Walnut Cove, N.C., in April, the N.C. Department of Environmental Quality issued a press release stating that “it will go beyond state and federal requirements to ensure minority communities are not negatively impacted by Duke Energy coal ash landfills.”

“EPA’s rules were meant to be a foundation to build upon,” says Vick. “Even though North Carolina can have rules more stringent than EPA, this proposal is the bare minimum required.”