Photo By
Southern Alliance for Clean Energy, used with permission 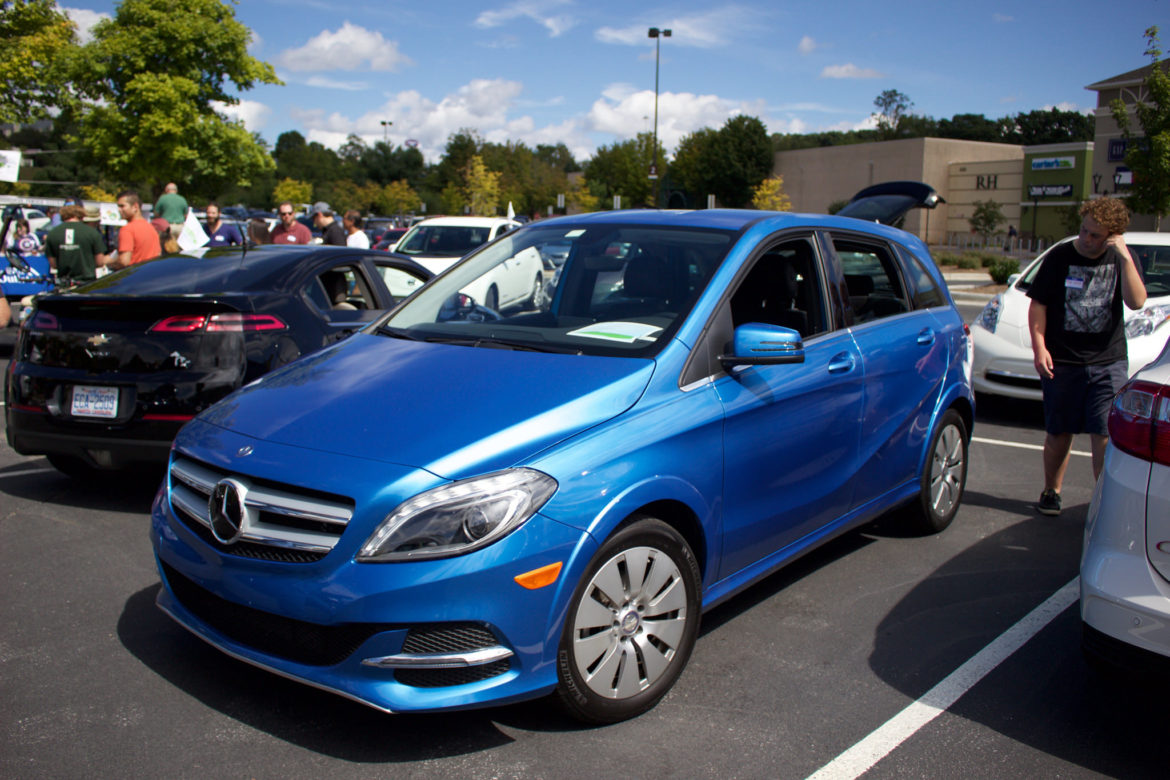 Race car driver Leilani Münter may be North Carolina’s highest profile champion for electric vehicles, but a week of events showcasing plug-in cars and their owners across the state show she’s far from alone.

Since 2010, EV registrations in North Carolina overall have grown from just over a dozen to 4,750 as of the end of last year.

While government data ranks North Carolina 31st in the country in EV registrations per person, proponents say the cars are growing in popularity in spite of lukewarm support from state policymakers.

Münter headlined the National Drive Electric Week event on Sunday in Asheville, one of several held across the state sponsored by groups like the Southern Alliance for Clean Energy and other electric vehicle proponents.

But the events, a chance for people to learn about and test drive electric cars, aren’t just happening in cities like Asheville, Raleigh and Charlotte.

Kinston, in rural Lenoir County, is holding an event for the first time with local auto dealers. Further south, the town of Pembroke, population 3,011, agreed to partner with the local university for a gathering.

“Last year was kind of small, it was our first event. We tested the waters. Forty-five people came out and took 13 test drives,” said Jay Blauser, head of sustainability for the University of North Carolina at Pembroke. “This year we’re going to do all that but a lot more.”

‘How can anyone in their right mind block Tesla?’

North Carolina state policy on EVs is perhaps most associated with its well-publicized clash with Tesla, the automaker that sells its cars directly to consumers rather than through independent automobile dealerships.

In 2013, the state Senate passed a bill that would have effectively outlawed Tesla sales in the state by requiring automakers to use dealerships. The measure failed in the House, and Tesla began selling cars from its Raleigh store soon thereafter.

Tesla did not offer a comment for this story, but Münter, an enthusiastic Tesla owner who urged North Carolina officials to grant the sales license, said the company was facing similar opposition from dealers and bureaucratic hurdles in other states.

“Something needs to happen on the national level, otherwise Tesla will have to keep going out to these different states, and that’s tying up a lot of energy,” Münter said. “They deserve a fair shot at selling their cars, and right now they are being blocked. How can anyone in their right mind try to block them?”

‘It will be nice when North Carolina does that’

The federal government offers up to a $7500 tax credit for electric vehicle purchases, but North Carolina offers no additional state incentive. That’s in contrast to several other states where EVs have flourished, including neighboring Georgia, whose $5000 tax credit spurred explosive growth of the vehicles until it was repealed last year.

A May study commissioned by groups seeking to reduce dependence on oil showed a $2,500 incentive in North Carolina would increase EV ownership and boost the state’s GDP by $52 million over the next 16 years.

At the same time it offers no financial inducements for EVs, North Carolina also charges plug-in owners an annual registration fee – now at $130 – to make up for lost gas-tax revenue.

While the fee was an annoyance to some EV owners when it was instituted, there’s no evidence to show it has depressed sales, and many owners seem to support it.

“Some people don’t want to pay for anything,” said Bruce Moore, of Cary, who’s leasing his third Nissan Leaf. But the fee, he said, “wasn’t a problem and it didn’t bother me.”

“If you want people to do something you have to make it appealing in some way,” said Blauser of UNC Pembroke, who owns a Chevy Volt.  “You have to put the carrot out there.”

Moore said the federal incentive wasn’t the deciding factor in his decision to go electric. But without it, “it would have been a harder choice.”

Noting that some states are already offering additional incentives, Moore said, “It will be nice when North Carolina does that.”

Almost to a person, EV proponents and owners interviewed for this story said one of the biggest barriers for potential buyers to overcome was concern about the car’s range.

“They are always concerned about being stuck on the side of the road,” said Moore. “One question is, ‘How far will it go’?”

Moore and other EV proponents say the question is somewhat irrelevant for most people’s regular needs. A Union of Concerned Scientists found in 2013 that 69 percent of American drivers travel less than 60 miles on weekdays, well within the range of most EVs on the market today.

Yet car manufacturers are making continual improvements on this front. Tesla remains the leader, though its high sticker price puts it out of reach for most consumers. General Motors recently announced its 2017 Chevy Bolt could go 238 miles.

North Carolina already boasts over 400 charging stations and growing. In July Duke Energy announced a $1 million grant program for cities and towns to build public charging stations. As part of its settlement with the U.S. Environmental Protection Agency for cheating on its emissions tests, Volkswagen is committed to investing $2 billion in EV infrastructure.

“At the local government level there’s so much support,” said Kristi Brodd, project manager with Plug-in NC. “There are so many cities and towns that are installing [charging] stations.”

Münter, who calls herself an environmental activist first and a racer second, believes there’s little question of consumer acceptance when it comes to EVs. Instead, she thinks the question is how quickly the “old guard” of conventional auto dealers will cede to new ways of doing business.

“It’s not the people that are against [electric cars], it’s the powers that be,” she said. “Electric cars are here to stay. It’s like going from a rotary phone to a smart phone. The old school guys might as well get with the program.”

“The race fans are really receptive. I have so many asking me, ‘Can I see the Tesla?’” she said. “Honestly, they are more interested in seeing my Tesla than my race car.”