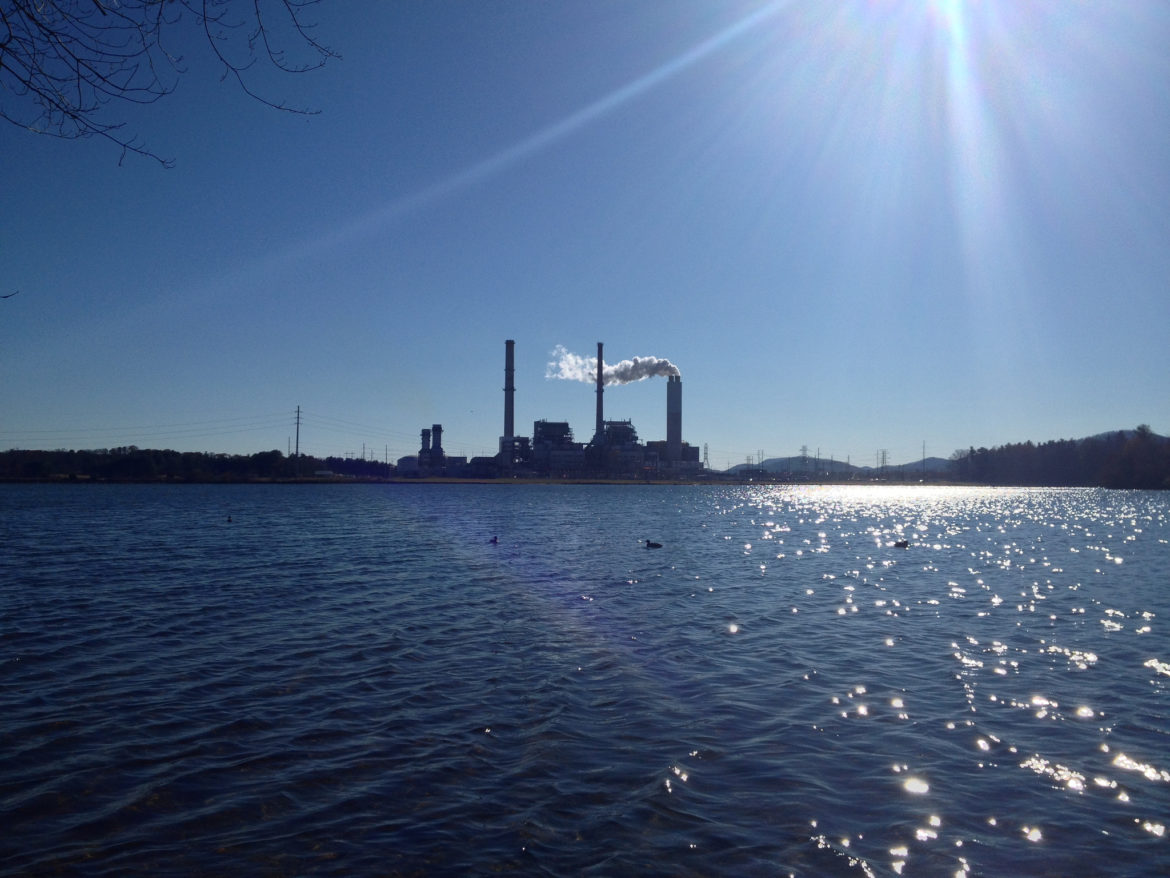 Duke Energy is converting two units at its Asheville power plant to run on natural gas.

While North Carolina is already on track to meet its 2030 targets under the U.S. Environmental Protection Agency’s Clean Power Plan, according to a recent Reuters analysis, state officials are still fighting the proposal.

Comments by North Carolina officials at an August energy policy forum show that it is political ideology, as much as if not more so than practical concerns, driving opposition to to the landmark Obama administration climate rules.

Donald van der Vaart, secretary of the North Carolina Department of Environmental Quality (NCDEQ), during an energy policy briefing in Charlotte in August, repeatedly called himself “courageous” for fighting the plan, which he says is an “act of overreach.”

“It would be ‘courageous’ for the McCrory administration to step up and create a plan for North Carolina’s clean energy future,” said Molly Diggins, director of the North Carolina Sierra Club, adding, “Instead, Gov. McCrory and his Department of Environmental Quality have challenged the Clean Power Plan at every opportunity.”

The NCDEQ, along with 24 other states, will make its case against the Clean Power Plan in the U.S. Court of Appeals on Sept. 27. It is anticipated the case will end up before the U.S. Supreme Court.

The plan requires each state to craft a proposal to meet state-specific carbon reduction goals. For North Carolina, that goal is a 39 percent reduction over 2012 levels.

Within two days of the final version of the plan being released on Aug. 3, 2015, the North Carolina Senate passed a bill directing the NCDEQ, then known as the Department of Environment and Natural Resources, to sue the U.S. EPA.

The NCDEQ did come up with a compliance proposal to submit to the EPA, though environmental advocates have argued that it’s inadequate and The Charlotte Business Journal reported that the NCDEQ admitted its plan was “intentionally designed not to meet the EPA’s requirements.”

Close to 17,000 public comments were submitted during the public comment period for the state’s plan, many calling not only for more renewable energy generation and less reliance on fossil fuels but also for more protections for the poor. Polls in other states have found broad public support for the Clean Power Plan.

“Somehow we’re muddling through without the help and benefit of the federal government,” he said during the Charlotte briefing, touting the state’s third (now second)-place ranking for solar installations, the groundbreaking of “the largest wind farm in the Southeast” and “a strong natural gas effort.”

He also said, “We have to get serious about putting nuclear power back on track in North Carolina; it’s the ultimate solution to environmental protections.”

Van der Vaart, who is both an engineer and a lawyer, testified before the U.S. House of Representatives’ Energy and Commerce Committee’s Subcommittee on Energy and Power in May 2015 to argue that the Clean Power Plan is legally “frail.” He also questioned the viability of the Chevron deference, a principle that holds that the courts should defer to agency interpretations of pertinent statutes unless they’re unreasonable.

State attorneys general interviewed by Reuters also cited an urge to limit federal authority. Proponents of the Clean Power Plan, however, note that it gives broad deference to states to determine their own compliance policies.

“The Clean Power Plan is the most radical of federal guidelines in terms of the amount of flexibility it gives states to dictate their own energy needs in order to combat carbon pollution,” says Katie Todd, communications director for the N.C. League of Conservation Voters.

“Van der Vaart is full of so many contradictions: It’s confusing; he bemoans the EPA for not protecting drinking water standards (in relation to coal ash waste) and then he speaks on the [Clean Power Plan] and how it’s horrendous and that EPA is an overreaching organization. You can’t reconcile those vastly conflicting viewpoints,” she added.

Asked how much NCDEQ is spending on the Clean Power Plan legal battle, and a potential appeal to the U.S. Supreme Court, spokesperson Mike Rusher said that the state has not incurred any costs associated with the case.

Nevertheless, he said, “the state environmental department will continue to commit the resources necessary to stop a costly one-size-fits-all federal program managed by an unaccountable bureaucracy. The Obama administration’s federal power plan is estimated to cost consumers and businesses $41 billion or more per year. According to Energy Ventures Analysis, the average North Carolina household’s electricity and gas bill would increase by $434 in 2020, a 22 percent hike over current rates.”

Van der Vaart mentioned those same estimates during his presentation during the briefing. That analysis was paid for by the energy industry, and historically, industry predictions of high costs from new regulations have frequently been wrong.

Other studies left unmentioned by NCDEQ officials have predicted economic benefits from the plan, including one paid for by the Southern Environmental Law Center. That study, by Synapse Energy Economics, found that “North Carolina consumers will save $201-348 million dollars per year in 2030 and beyond if the state complies with the Clean Power Plan through increases in energy efficiency and renewables.”

It also found that the state is already well positioned to exceed the plan’s targets.

Additionally, the Natural Resources Defense Council found that North Carolina “would see the creation of 6,700 jobs, and the state’s households and businesses would save $713 million on their electricity bills in 2020.” And Georgia Tech University released a study indicating that the plan would lead to “significant energy bill savings to cities and businesses nationwide.”

In July 2015, the North Carolina Sierra Club wrote a letter to van der Vaart in response to comments he made at another energy forum in Raleigh. The letter states that the secretary indicated that “the state would not engage in a stakeholder process as it develops a state compliance plan” for the Clean Power Plan and that it was “apparently ruling out energy efficiency, renewables, and other pathways for compliance.”

The letter urged the secretary to clarify, writing, “in seems inexplicable that the administration apparently sees no need or value in engaging stakeholders.” Diggins said there was no response to her letter.

Duke Energy, the country’s largest energy producer, headquartered in Charlotte, has urged the state to take a less confrontational approach to the Clean Power Plan and to be more “collaborative” with stakeholders.

And Virginia-based Dominion Energy, which provides energy to customers in northeast North Carolina, wrote in a court filing that the plan “is compatible with current trends toward additional renewable and natural gas generation in the power sector based on market conditions and customer demands.”

The filing went on to say that the plan’s “effects on power plants and customers can be successfully managed” if emissions trading is allowed and states are allowed to be flexible with the timing of their emissions reductions.