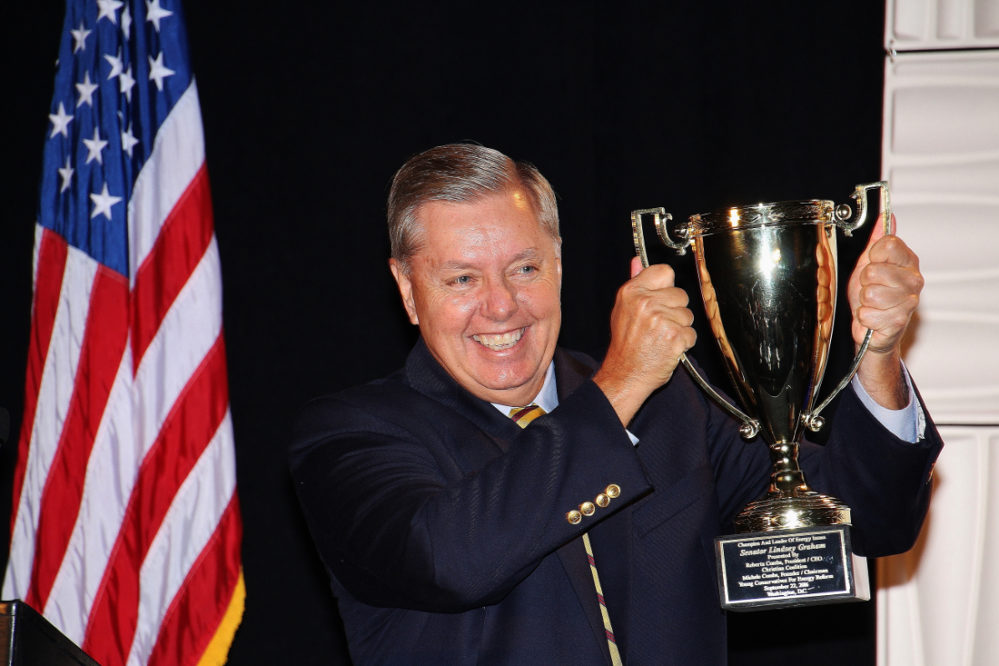 WASHINGTON, D.C. — Conservatives from throughout the Southeast and Midwest challenged their colleagues Thursday to step up their public education and lobbying for clean energy in Congress and in state capitals.

About 480 participants at the second annual Conservative Clean Energy Summit, co-hosted by the Christian Coalition and Young Conservatives for Energy Reform, heard lawmakers from South Carolina, Iowa and other states articulate how renewable energy is helping define what it means to be a conservative in today’s political climate.

“The fact that you’re involved in the clean energy movement, I think, is the ultimate expression of your faith and the understanding that we have to be good stewards of God’s creation,” South Carolina Sen. Lindsey Graham said to cheers resembling a political rally at times.

Organizers said this year’s summit was roughly twice as large as the inaugural event a year ago. It also attracted an array of clean energy industry and trade association sponsors eager to enlist the support of conservatives, especially in the Southeast where much of the public is just beginning to grasp the benefits of solar, wind and energy efficiency, according to professionals there.

“There’s a lot more energy and a lot more interest in (clean energy) this year,” said Roberta Combs, CEO of the Christian Coalition. “This is a new crowd. It fits with our goal to continue bringing new people along to educate them, then we can motivate them and then we can activate them.”

“It’s starting to percolate because they see how important this is,” Combs added.

‘We must hold our government accountable’

Combs explained that clean energy has been off the radar of social issues that have driven interest in the Christian Coalition’s activities, but no longer. The more conservative activists educate and lobby, the more clean energy is attracting a following, and the financial support that lawmakers covet, she said.

Notably absent from talking points used by most of these advocates is climate change. Pollster Adrian Gray of AGC Research told the Summit that while many young conservatives believe climate change is happening, people still differ in their beliefs over what’s causing it. “There’s not an easy way to categorize it,” Gray said.

Among other lawmakers addressing this year’s summit were Iowa’s Sen. Chuck Grassley and Rep. David Young, two of the wind industry’s biggest supporters in Washington. They were among those championing government stewardship of the environment. Said Young: “We must hold our government accountable to make responsible decisions to remain good stewards of our natural resources.”

Despite significant initiatives embracing clean energy over the past eight years by the Obama administration, a national survey of 940 would-be voters under 35 described as young conservatives found that 74% thought the country is on the “wrong track” generally. Among 11 issues, “Jobs & Economy” topped the list as the most important to 50% of those surveyed, “Environment & Climate Change” and “Energy” each garnered only 7%.

Some in attendance expressed surprise that “global competiveness” resonated in the polling as an added benefit of domestic clean energy. “It’s like the early days of the (nuclear) arms race. Are we going to fall behind? They’re starting to pick up on that,” Gray said.

Ash Mason, Southeast Director of the Christian Coalition, said he’s seeing tangible progress getting more lawmakers to understand why clean energy is so valuable to their constituents and to their political future; more specifically how Christians and young conservatives can help.

“We’re a shield for conservatives to stand up for this. This is now a family value,” he said.

Combs said the Christian Coalition played a material role late last year in helping persuade House Republican leaders in Congress to back an extension of the solar Investment Tax Credit and the wind Production Tax Credit.

The group, along with the Young Conservatives for Energy Reform (YC4ER) – founded and chaired by Combs’ daughter Michele Combs – helped secure more than enough votes last month in Florida to approve a proposed constitutional amendment there that will exempt property taxes on renewable equipment starting in 2017.

Between now and Election Day, those same forces in Florida are increasingly confident they can overcome massive spending by utilities trying to pass another constitutional amendment, but one with a different objective. Amendment 1 would significantly restrict the market for rooftop solar by nominally protecting consumers’ rights and outlaw third-party electricity sales.

Tory Perfetti, Chairman of Floridians for Solar Choice, joined others at the Summit heralding the collective efforts of the Christian Coalition along with numerous other organizations working against Amendment 1.

“We believe that members of the Christian Coalition are once again a part of an overwhelmingly cooperative group where they will do their part to help defeat it,” Perfetti said.

Perfetti said he is seeing support for clean energy in Florida and elsewhere grow organically. “This is very grassroots across the board. I think that’s why it’s taking so long to get organized monetarily.”

Alicia Prevost, who directs a push by the Environmental Defense Fund to mobilize young voters on clean energy and climate change, said “today’s event was just the latest evidence of a clear shift in thinking among young conservatives compared to older generations when it comes to clean energy.”

Michele Combs of YC4ER echoed most speakers acknowledging that America won’t be rid of fossil fuels anytime soon. Rather, she said, “we want conservatives to start thinking bigger and let them know there are alternatives.”

“No matter how much money fossil fuels are putting up against us, we’ve come together … our focus is on solutions, said Mason. “As the Bible says, the truth will set you free … No amount of money can hide the sun.”